Maple is Harder then Birch Right?

so I purchased a sheet of birch plywood and maple plywood. They looked similar…but boy they don’t cut similar. One was fine, the other would not cut through no matter what setting I tried…it was won’t cut through…or it will…but a flame.

I wasn’t smart enough to leave the label on so I need to bring these to my supplier so they can tell me which one is which so I buy the one that works. I’m pretty sure the top on is birch though. How can one tell to the more experienced users out there? 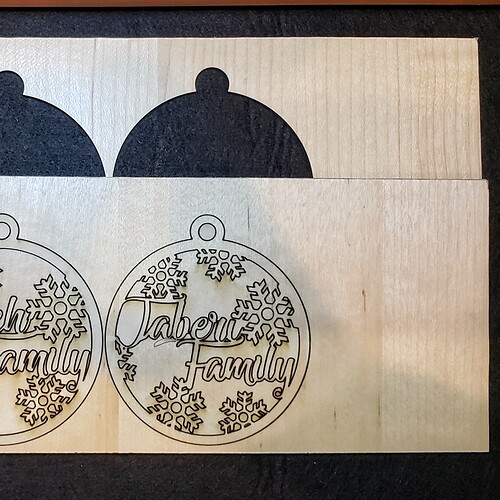 Can’t help you with the wood, but the ornaments are killer!

Too bad they didnt cut through. I was so annoyed

Yeah, it seems like the one time I don’t check to see if it cut through before moving the work - it doesn’t.

Plywood is plywood. MDF is MDF (Proofgrade “plywood” is actually MDF). The hardness of the thin layer of veneer makes little difference. Both plywood and MDF vary a lot so there’s really no way to tell what settings are correct without testing. I believe what Glowforge does is to make their settings very conservative so that it will cut through no matter what the actual consistency of the MDF is. It seems like their recent changes were to make the settings even more conservative. This works, but isn’t ideal.

I would say they’ve become more liberal with the settings. They used to be more conservative as the goal seemed to be just barely enough to cut through without leaving flashback.

We’re saying the same thing, just using opposite words. For me, “conservative” = “less risky”. For you, “liberal” = “looser”. When they originally announced Proofgrade, I thought it was brilliant. I assumed they were going to be testing materials as they were produced and putting a code on each board which were the proper settings for that board. The reality, as we know, is a lot less exciting.

An awful lot depends on where you got each of the materials. I bought Birch plywood at HD, The birch cut fine, however the laser proof bondo they used as filler would still resist, no matter if the rest burned up from the power. All the layers in that case were likely birch as well.

If the middle is MDF and you bought it at a big box store, then they are likely Columbia Forest and cut well though I personally don’t like anything MDF. I don’t think Columbia Forest sells birch so from them it would be most likely maple.

Unfortunately there are many white and near white woods and telling them apart is hard. but there is … 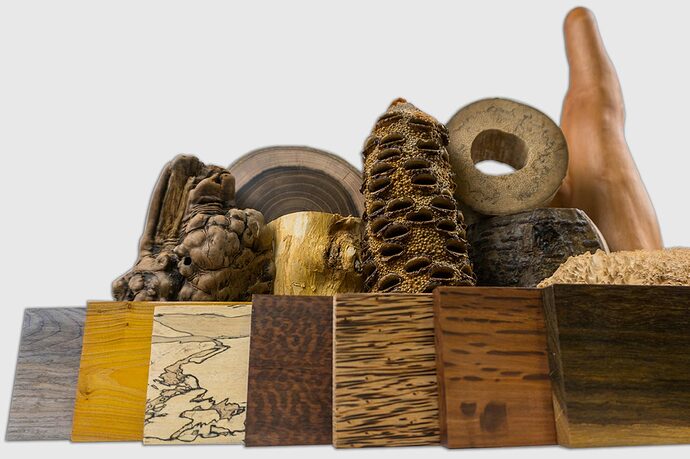 My material is from Trotec. Material specifically designed for lasers. One of them wont just even at full power. Then I try a 2nd pass, lasted 2 seconds due to flames. Then 2nd pass 100%, won’t cut. Slower speed, wont cut or just too slow flame.

It. Is. Only. One. Of the wood. I know it’s likely operator as I cut other laser material, 1/8 thick. I never used non laser wood because I read how finicky big box brand can be. Not adverse to it, it was to avoid this problem and was willing to pay the premium.

I used other Trotec wood, seems fine too. So no idea why the exception

Then I try a 2nd pass, lasted 2 seconds due to flames.

I think birch is more likely to burn than maple, as reflected by my test samples even 3/8 solid maple can cut at 100/full power without even a coal produced, but there are many types of maple. Once you make plywood however, full hardwood tests go out the window, and depend on what is inside.

I used other Trotec wood, seems fine too. So no idea why the exception 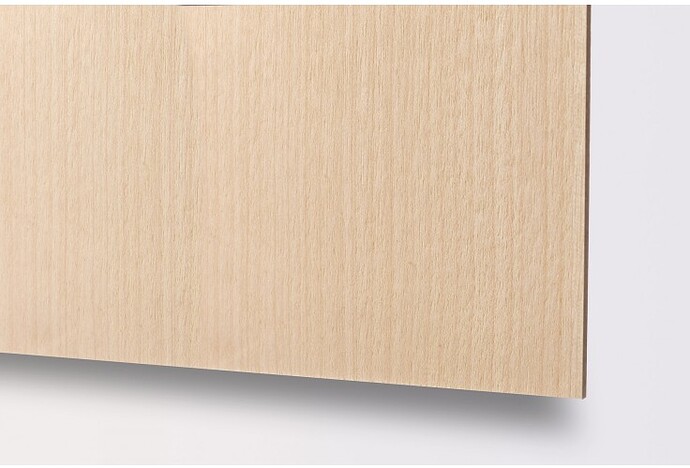 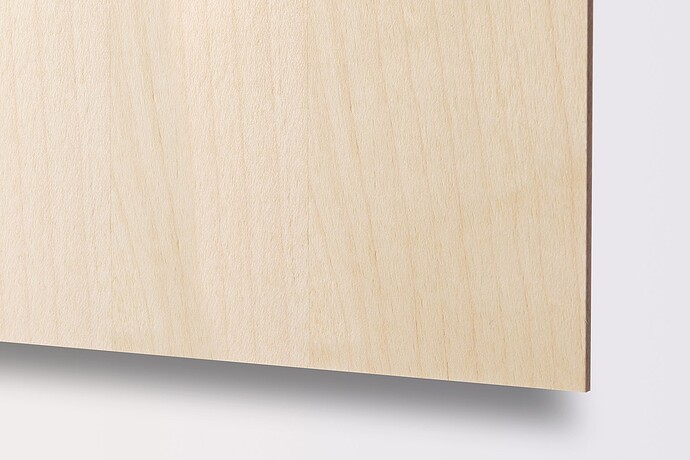 This could help but I would contact their support people

Snap judgement is that the maple is your issue

I’m pretty sure its the maple ply not working, I was dumb to remove the label. You’d think both would cut through so didnt think of it. The veneer is so thin, why wont it cut that last bit at full power is beyond me

I did contact them, trying to get them to confirm so I can swap unused wood

The veneer is so thin, why wont it cut that last bit at full power is beyond me

It looks like neither maple or birch was the issue but perhaps that batch of filler for the maple.

Have you contacted Trotec with your concerns? Not much GF can do if it works fine for everything else.

Have you contacted Trotec with your concerns

Yes, but no answer yet. I ask here so get knowledge as when I do get a hold of them, it’s easier to push back as I dont think it’s the machine issue

So just got off phone with Trotec and sounds like alot of Glowforge users has the same on Trotec material not working. Might be the glue MDF composition of the material not compatible with our machine. I only have this is with one wood ply though

Sigh, now I wish the borders were open. Proofgrade works or find another source for the wood colour thats doesnt work

You could try https://ocoochhardwoods.com/plywood/,
they have virtually the same maple, and search for Columbia Forest Products that is also the same and might be in one of the local big box stores.

Thanks, I’ll look into them. I’m in Canada so its challenging to find good sources. I thought I won with Trotec as a supplier though

ither maple or birch was the issue but perhaps that bat

Hey I’m not sure if you’ve resolved your problem yet or not, but I just got done with a big project and chose to go with Trotec products to save costs. I had the same problem of not cutting through all the way with 1/8" Bamboo veneer. I tried everything and caught a bunch of pieces on fire. Finally I got frustrated and decided to change my focus height by -0.01" and it worked! I have to change the depth before every cut because for some reason my GlowForge Pro doesn’t accurately measure the focus height, but it was that simple all along. It kept reading 0.13" and by changing it to 0.12" all my headaches were solved and I was able to cut the veneer with only 1 pass and my power was somewhere between 90-96%. Hopefully this helps resolve your issue and helps future creators from making the same mistake.

Have you contacted GF about that? They may be able to tweak your settings and correct that issue.