Anyone else watching the live feed from NASA? Perseverance rover is landing shortly. 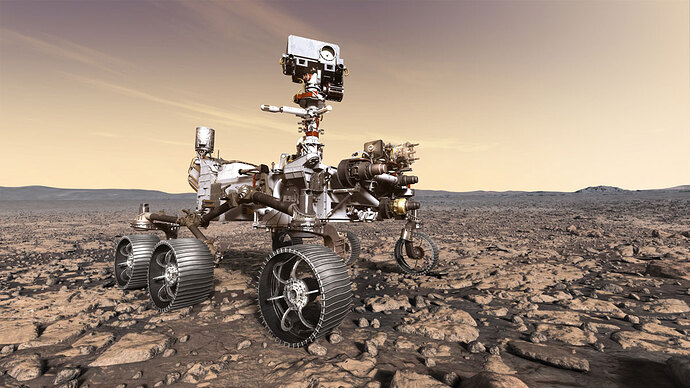 Information on how to watch the landing of the Perseverance rover.

Oh interesting, I followed their Exploratorium link and it doesn’t start until noon…so I was watching a countdown. Now I’m listening to pre-talk

Oh hey, I was getting bad sound from there, but the same sound playing in the control room is clear: Mission Control Live: NASA Lands Perseverance Mars Rover (360 video) - YouTube

Interesting enough I have family that actually seen it touch down…

Less than 2 min from atmospheric entry…

Landed! 1st image is in.
Your tax dollars at work, this belongs to you.

I’m always amazed at the amount of mathematics which must go into something like that. Some very talented people working there.

Amazing accomplishment, congratulations to NASA and all who made this happen!

So cool. Pictures from Mars. Congrats to all involved.

Yep, my daughter, my son has always said she was from another planet now we know which one…

Imagine standing on the desolate surface - silent except perhaps for light wind.
A sudden sonic boom announces the arrival of a visitor from another planet… A tribute to the curiosity and Perseverance of the creatures who envisioned and accomplished the feat.

The countdown to Mars is over. Now on to the science and discovery!

Still amazes me that whole sky crane thing has not only worked but twice now. It’s like “how can we make this the most complicated landing possible? I got it… we’ll shoot into the planet like a bullet… Then we’ll steer the bullet where we want it to go… Then we’ll eject various fairings. The more possible points of failure the better… Then… GET THIS… we’ll DROP another ship that will use multiple rockets to maneuver before… oh you are going to love this… WE WILL DROP THE ROVER WITH CABLES LIKE IT’S ON A CRANE before we cut them loose and fly away.” THAT’S IT!!! This guy is the winner. Give that man the NASA complication award of excellence.

No kidding! It blew me away they managed to pull that off the first time. My argument from ignorance is it would seem easier to have legs on the “sky crane” to allow landing and lower the rover from underneath.
Taller minds than mine figured differently.

Yep nailed it for the 6th time!

And this was the hard one. The landing zone was one that is incredibly interesting from a scientific standpoint but scary from an engineering one

(Live from the JPL control) “A landing solution has been established.”
That made the hair on my neck and arms stand. I can only imagine the thrill experienced by all the individuals involved with the success of that effort.

To land a Mini Cooper sized fragile scientific robot safely on that orange speck in the sky… Maybe I’m showing my age, but I am in awe of this symphony of engineering.

Maybe I’m showing my age, but I am in awe of this symphony of engineering.

I don’t think age has anything to do with it! This was science-fiction (from stories or movies) coming to life in the real world! It was an amazing “symphony of engineering”!

That thrill, or chill in my case

, is why I love working in the industry I work in.

I completely forgot about this, which just shows you where my mindset is. Yesterday my vaccine group opened in MA and that was my focus.

Speaking of which, we could have used some of those very talented programmers here. Or any one of the countless software packages that is already available to help with appointments and ticketing…