I have been using mechanical keyboards for a good few years, my oldest a behemoth full size 108 key monster. When the 2 key on the numpad stopped working, it went into a box for a while as I went further down that rabbit hole…

Made a replacement plate for it, as well as a pcb-like handwiring helper to replace the guts and get another decade out of the frame (should support QMK programming now which is a plus).

Made files for the three items I have that I could get at the insides to make something that would work. Will post here: https://tinyurl.com/e8kr6w68 (will add any newer models I find there)

So far there are parts that -should- fit any of the following: BM43a, IKBC108M v1, and KBDPad mkii.

Those in the mech space know Geekhack.org, have the build progress over there documented as I go under a thread called “Full Size Freak Show” in the let’s build together section.

Anyone who wants to scratch build to those dimensions can do so by modifying the svg to whatever case configurations they may have. In my case (no pun intended) it was a simple 17" x5" that the frame hugs around. Pictured is a bottom piece, but the folder has a plate as well for this one. I figured if I can repair my model, I might scratch build another after whatever I learn. 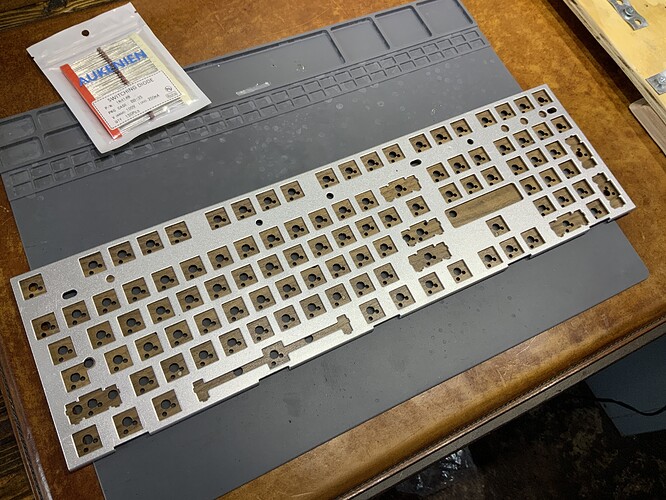 That’s fascinating! Will you post a photo when you are finished?

This has been a very slow burn project, return to it for a little bit every few months. I have the board’s switches wired, and the components purchased to program the controller. Need to get some help on the mech keyboard forums about the programming part for the matrix, but this is what has to happen on the wiring front if y’all are still curious. It’s a ghastly monster of a soldering job, and have been advised not to use as thick of a layer of walnut like a PCB, but rather have it be a kind of gasket around the outside to make more room inside the case if I can source longer screws of the same type used to mount the front and rear case assembly. 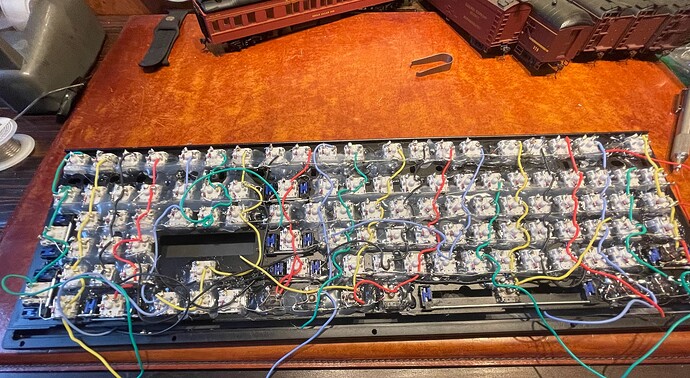 Good for you, for keeping on it. I have so many UFO’s (un-finished objects) around here, I have to write myself notes (why did I do this?).