As in my previous post about the new baby goats, we ALSO got a new horse this week for myself and my daughter. Luna is a registered appendix horse (cross between a quarter horse and thoroughbred). So a big change for me but exactly what my daughter needed. I was used to a much slower horse, so this is somewhat like changing from a Chrysler mini-van to a Porsche 911. I will definitely have to up my lessons. but since my daughter competed D1 in jumping Luna is great for her. 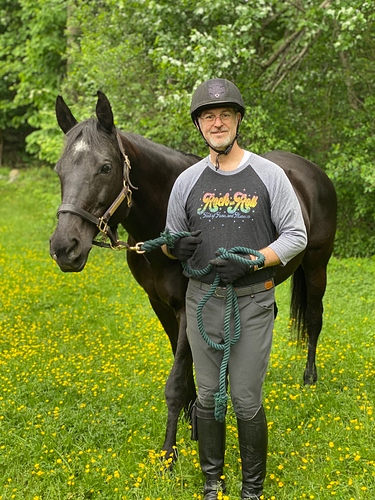 Anyway on to the make. So she is on Regumate (progesterone - i.e. birth control) to suppress her estrus, which helps her be nicer around other horses (she is super sweat to people and likes to snuggle). Anyway Regumate requires some care in handling so only a couple of us (males) handle it, as it can be skin absorbed, and is essentially horse dose so a massive human overdose and can be quite harmful to women of childbearing age; it’s not benign to men, but less bad. So we needed an indicator of whether she’s gotten her daily dose (you squirt it onto there feed). The barn has a pretty elegant look so folks didn’t want a 2-tone acrylic sign so I decided

Maple Plywood would look nice. So a quick CAD in OnShape and we had it (now the magic is I needed sufficient clearance between the layers, so trying to figure out how to get enough clearance without making it sloppy loose. Clearly a whole other 0.125" piece of ply would make it flop around, so I used the 0.006" laser safe stencil material I have (from CriCut if I recall?) and it provides just enough clearance to slide in nicely.

Since I couldn’t imagine CA glue would stick to the stencil material, I used the screws to hold it together and to the door frame of her stall. Which also lets me adjust the tension on the whole thing. 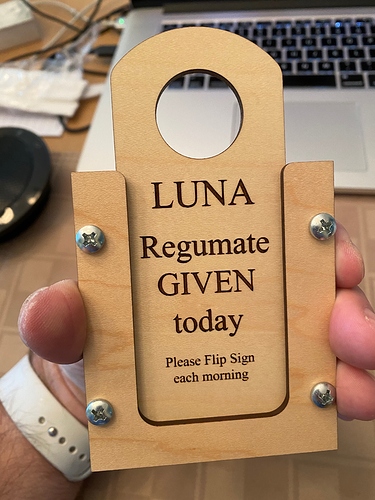 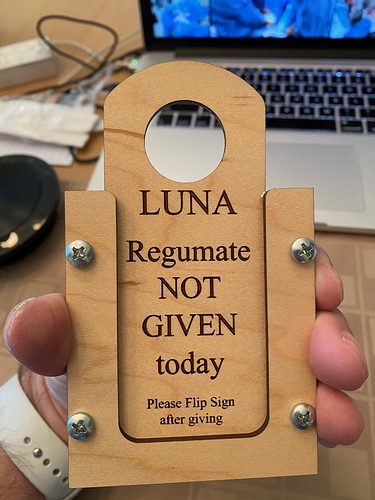 And whatever idiot back in history picked appendix as a name for a breed clearly wasn’t worried about the forms that would all read things like “Appendix registration”, and of course I am thinking “crap did I misplace the primary registration certificate?”

So one of the things that bugs me in life is that on the credit card machine it says while in progress “do not remove card” then “remove card”.

Using “remove” twice when you are not paying attention leads to errors.

So, now when I’m doing user interface design stuff I try to do things like “card in use”, “remove card” so it is more obvious what is happening and that the two things are quite different.

EDIT: Sorry, that reads like I’m being snarky. I’m not, just my brain is wired wrong. Genuinely like the trouble you’ve gone to make a nice sign that is properly finished and looks smart.

history picked appendix as a name for a breed

Yes, I had to google this. Many moons ago I rode, had an OTTB. Looks like it might be a newer term. Luna is beautiful. My George was a bay.

Nice! Clean look, and should work out well.

I think it’s a great suggestion for future versions, e.g.:

I can just see where someone does not qualify for an event and the stall has to be given up to a horse that does.

“Hello, we are here to remove your appendix unless you remove it yourself”

i read “registered appendix horse” and thought, “wow, what’s so amazing about that horse’s appendix that it needed to be registered? is that what the medicine is for?”

So horses don’t have quite the same colon structure as people. Their Cecum (where the human appendix arises from) actually works as the primary place for digesting plant matter (which we don’t really), because unlike a ruminant they don’t do a particularly good job up in the stomach (hence why a horse eats a big bag of hay and produces a huge pile of poop, while a goat can eat the same hay and produce a tiny handful of pellets)

However, it turns out Appendix is derived from the registry book, which is the American quarter horse association’s registry book, where appendix horses are literally written down in the appendix. Through various means they can be moved into the main book (the reason you care is if you are breeding, children of an appendix mare do not automatically qualify for the AHQA events/shows, etc). So it turns out both of Luna’s babies went on to be champion jumpers so they got fully registered themselves.

not surprised they don’t have an appendix, since their gastrointestinal tract is designed to do different things. it’s just where my mind jumped to when i saw the phrase at first.

my horse interactions were mostly limited to morgans, since that’s what my mom rode as a kid, and then when she got horses as an adult, that’s what she got (and what i learned to ride on). stubborn, but fun to ride.

Our other horse is a Morgan.

so you know what i mean. “spirited” is maybe a more horse term for their personalities? i liked it, both of my mom’s horses that i rode were competitive, wanted to be out in front of all the other horses, and liked to run. i would have to hold Hawk to a trot because he really wanted to get up to at least a half canter (and that was true even after i learned to properly post and wasn’t bouncing uncomfortably on his back).

Have you ever thought of using a glass marble instead of the regumate?

I think it should also say something along the lines of “given” and “needed” as tim suggested.

Replace her ovary with a glass marble? Well on our other horse we replaced her ovaries with a big pile of money…

I don’t know a thing about horses so of course I had to look up glass marbles. How long has this been in practice? Because now I wonder if that might be the origin of the saying “losing your marbles”.

no replacement lol, a glass marble is inserted in the uterus to help the mare not ovulate. Supposedly ovulation is what is thought to cause the misbehavior

I don’t know a thing about horses so of course I had to look up glass marbles.

Me either. Essentially they are using it as an IUD. Glass is a pretty good substance for preventing TSST (toxic shock), so likely safe.

Looking it up, it might be safe if done right , but there are a lot of horror stories.

but there are a lot of horror stories.

Yeah, I’m going to go with my wife’s recs on this one (she’s a vet) along with my fellow large-animal vet school colleagues’ recs. It’s annoying but not a huge deal in the scheme of things