Since its creation with the commissioning of the USS Holland in 1900 the US Submarine Force has lost 65 ships. At formal gatherings, submariners commemorate those submariners who gave their lives in the line of duty in a ceremony known as the Tolling of the Boats. For Memorial Day I made this flag as a physical representation of that ceremony.

On a lighter note, the plaque is made of three different types of plywood. The field is 0.2" walnut, the red stripes are 0.2" cherry, and the stars and white stripes are 0.15" maple to provide some depth contrast. Pieces were then glued onto 0.15" maple as a backer board. 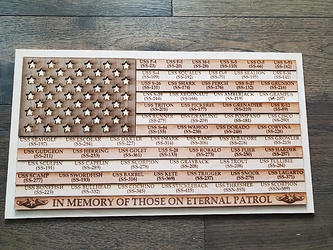 Damn it man, I thought I was done with remembering for today. I’m old enough that the scorpion and thresher were still very tender subjects while I was serving.

My brother would appreciate this. He was a submariner aboard the USS Cavalla in the early 90’s. He said being in the Navy was the hardest and the funnest thing he ever did.
Thank you for your service.

the hardest and the funnest thing he ever did

That is something that you come to realize well after you are out.

After being out for a bit, you realize you are not going to be doing cool exciting stuff with toys that make things go boom.
Like it sounds. Unless you are a stunt man or equivalent, it is the most exciting time of your life, but you do not realize it while doing so.

What a wonderful project! Wow!

Was commissioned to take it to the next level as a farewell gift. 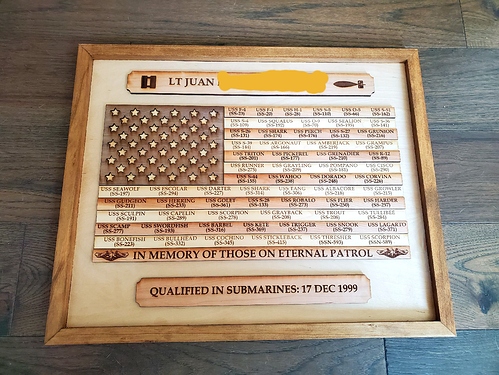