I made this minimalist Death Star* for my husband, who decided he wants to hang it on his whiteboard at work – which obviously means it needs a hanger. Good thing I have a laser, right? Oh, but since I do have a laser, why make a plain hanger when you could put the Imperial Seal on it – no! better yet, why not make the entire thing a Star Destroyer, can you just make it look kind of like this? 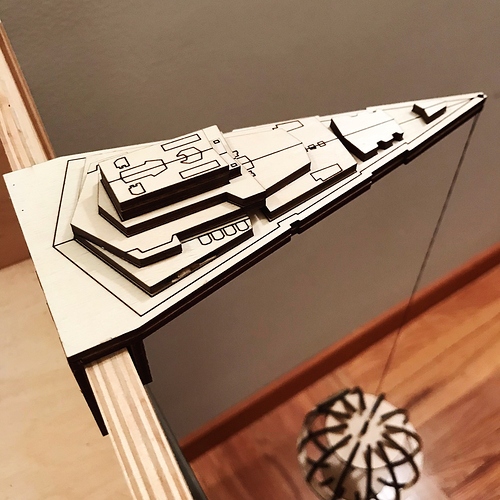 1/8" Woodpeckers bb ply. I used boxes.py to generate an L-bracket in the size I wanted, then brought the SVG into Illustrator and kept the finger joints untouched while I turned it into a spaceship. 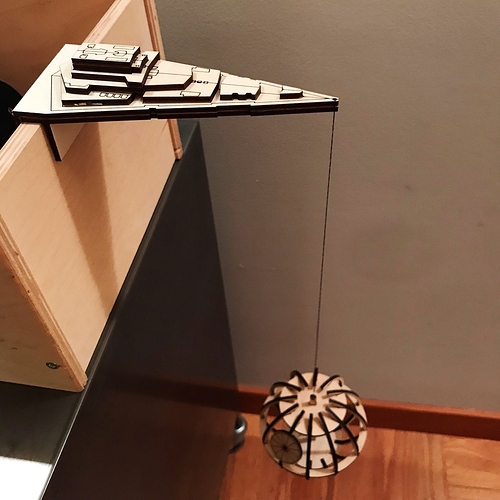 The L-bracket design was too wobbly, especially with the weight of the layers on top and the Death Star below, so I added a second short leg to brace against the front of the whiteboard. Then I decided that the single base layer didn’t look proportional with all of the layering on top, plus realized that if I added another base layer on top of the one with the joins I could gain a little more design room. There are six layers, and to keep things sorted and easy to assemble I scored each one with details plus the center line and the outline of the next layer. I left off the top vertical bit in the name of flat design, already having a ton of layers, and not being sure how I wanted to do it…but I have since figured it out and may have to build one just to see how it looks. 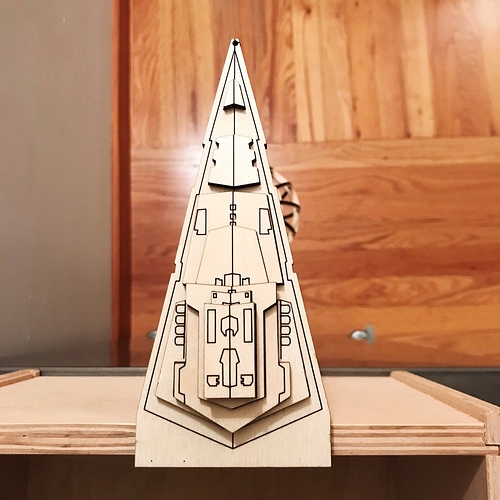 This was such a fun little project that I mostly don’t even mind that I am pretty sure the top edge of his whiteboard is above eye level for most people, meaning that I should have built out the bottom of the Star Destroyer instead of the top. Next iteration, I guess.

*Minimalist Death Star is super super cool but be prepared for it to be sort of fiddly to glue together.

Neat! First kid on the block to have one of those. (You know you’ll have to make them for everyone who sees it, right?)

I believe someone fully expects to be King Geek for a day when he shows this off.

Wonderful project! I really like the idea of coordinating the hanger with what is being hung.

Great Project and write up, thanks!

Thanks! I will confess there was some eye-rolling as his plans got grander and grander (the laser version of scope-creep, right?) but in the end I learned some useful stuff + I do love how it’s sort of a little installation now.

It would be fun to add tiny bits from time to time (flea-sized action figures and the like).

Yes! Or maybe a tiny X-Wing…