Yup… tried it on my pancakes… made for a fun afternoon in the bathroom, but made the pancakes crunchy.

I squirted this glitter glue into the engraved area, spread it out a bit, and let it dry overnight before removing the masking.

my wife has been doing that on and off for years. no need to pay someone $7, just keep a bag of cheapo glitter and self stuff 1 out of every 4-5 cards w/a little extra something something and await the cursing.

or, if you’re even more evil, do something like this.

I gave the kickstarter birthday card to my brother in law. He opened it in a restaurant. I was sad not to have been there to watch him try to make it stop.

Lol those cards are awful and awesome.

they’re amazing. and best used when you know they’re going to open them at an awkward time and place.

Funny story…back a couple years ago while we were all killing time, we had a Holiday gift exchange for those who wanted to participate…my Secret Santa apparently sent me one of those.

When I got the card, the envelope had been taped shut along one edge, and it looked like it had been sliced open, not mangled in the usual way that the post office treats mail. I opened it, read the sentiment and then thanked the sender, who was a bit confused at being thanked, given the nature of the device inside.

But that one didn’t have a device - apparently someone at the post office triggered it, and in desperation, they actually opened the card and surgically removed the player…I later found the slit in the card too.

(Aside from that being quite illegal, I get the biggest mental lift picturing them trying to shut that thing off. Karma exists.)

well that sucks that you didn’t get the full on experience, but it is amusing to think of someone "going postal’ on the package in the post office…

Just a basic Raspberry Pi case from Thingiverse with a logo etched on it. There’s absolutely nothing special about this, and that’s why it’s so special. I always wanted a laser cutter so I could make project enclosures, and the fact that this is so routine and boring and I can now go from “hmm, I should have a box for this” to a finished product while waiting for a pizza to be delivered is like living in some science fiction future. 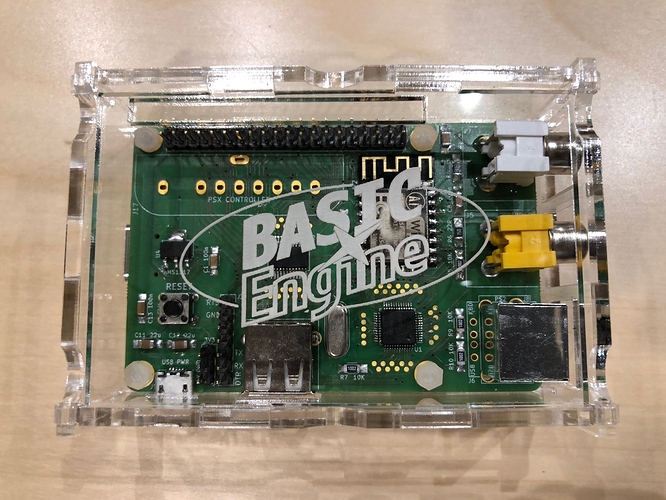 Everything looks better in an acrylic case. I never get tired of seeing them.

the fact that this is so routine and boring and I can now go from “hmm, I should have a box for this” to a finished product while waiting for a pizza to be delivered is like living in some science fiction future.

It is amazing. I have friends and colleagues who struggle with “how could I ever get this made”, and I am just “hold my beer” and out it comes. It also helps to be able to whip stuff out in CAD in minutes.