A few months before my GF showed up, I remember reading a post about some software that could make models like the following… 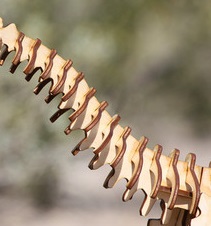 It allows the user to design two of the vertebrae and it would interpolate the ones in between.

I have spent over a day pouring over these forums and the internet in general and I cannot find the post or the software/website. It was a comment, not the primary topic. If anyone can point me back to that post, I would greatly appreciate it.

Are you talking about Slicer, perhaps?

Would slicer interpolate between end points like that? Or, just break up/slice an existing 3d model into stackable cut pieces?

I’ve never used it, but maybe OP is misremembering slightly. Seems you could always start with a loft and then Slicer it.

@chris1 is correct. Slicer would be what you’re interested in. Take a solid model in, it slices for you and provides cut files for the laser.

What I’m thinking of was something that would create those 2.5D critters/skeletons. It was specifically for that. Loft and Slicer is an interesting alternative.

I played with it a little bit months ago, but I’ve replaced my PC since then and can’t find it.

Slicer has limited formatting options. It only slices on fixed axis or radially. It would not slice along a curve like you’ve shown @esteele, with the ribs following the curve of the spine.

Perhaps you were thinking of this topic that allows interpolation between shapes in Inkscape.

That’s a useful topic. I hadn’t read that one yet. However, that’s not it either. This wasn’t a function of one of our commonly used tools. It’s functionality was somewhat limited, but focused only on generating the those kinds of models. It had a 3D WYSIWYG front end.

Don’t spend a lot of time on this. It was one of those things that you either caught it or you didn’t. For some reason, I’m thinking it was a web-site.

I knew I wasn’t crazy! At least not about that.

Yes, I’ve been waiting about two years to try out that software. Thanks for asking the question to get that memory to the front of my brain.

I know what you mean. I don’t have any particular project in mind. I just know that I want to try this 2.5D method of designing and see what I can come up with.