For those who may have use for such things, there is a $1 sale on a bunch of monoline fonts ending today:

I am not familiar with the vendor.

Huh, interesting. Not clear if they are single stroke open paths though. I guess I could spend a buck and find out for us.

Let’s see, which one looks good… Rogue one isn’t bad.

Unfortunately, on typing, it’s not a single stroke font, it’s a typical outline font, at least in TTF.

First thing: the legs on the y’s are truncated. Strange, I tried resizing the bounding box, no luck. 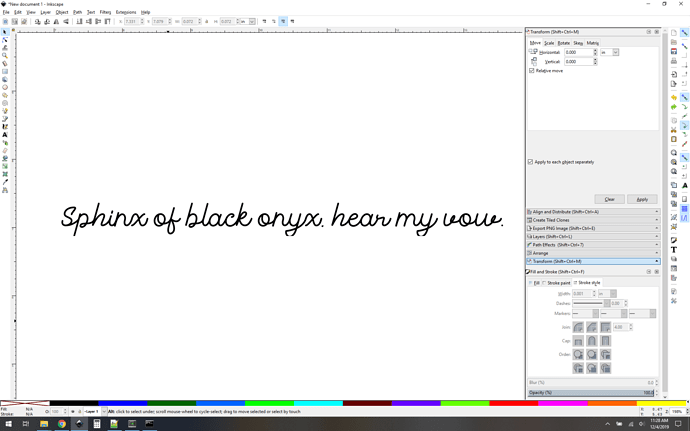 Even breaking the line didn’t help that. I wonder if it would print incorrectly? 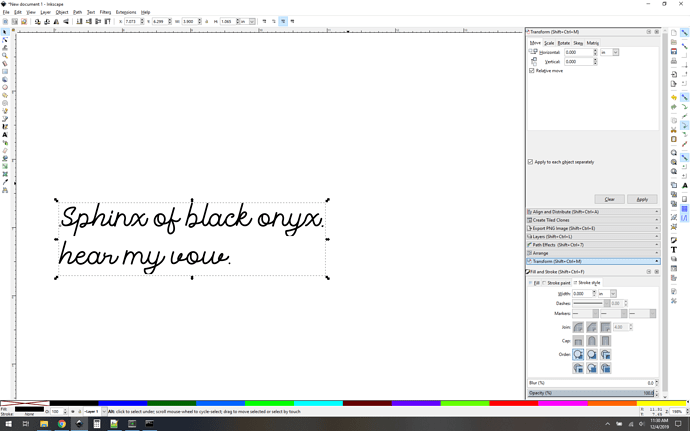 Anyway, I forge ahead. I converted it to a path, then set a very thin stroke and removed the fill. This revealed a few artifacts, typical font conversion warnings. Problem areas circled in red.

Overall not bad. You’d need to merge the shapes to get a single object, of course, but not bad. 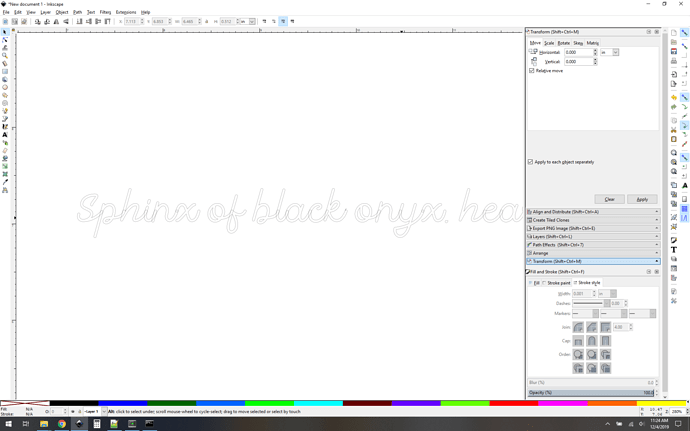 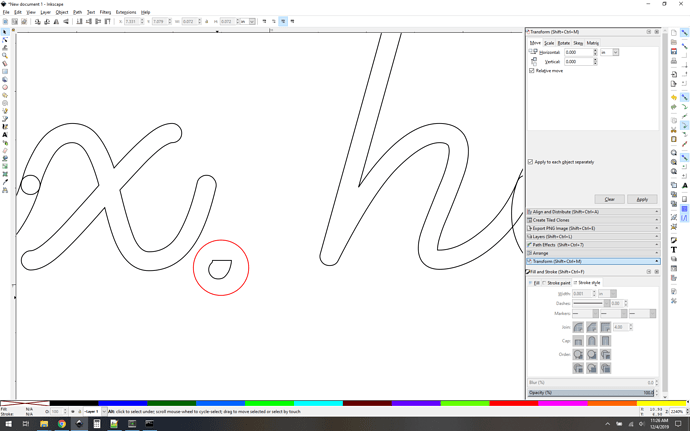 Slight mismatch on the overlap here. 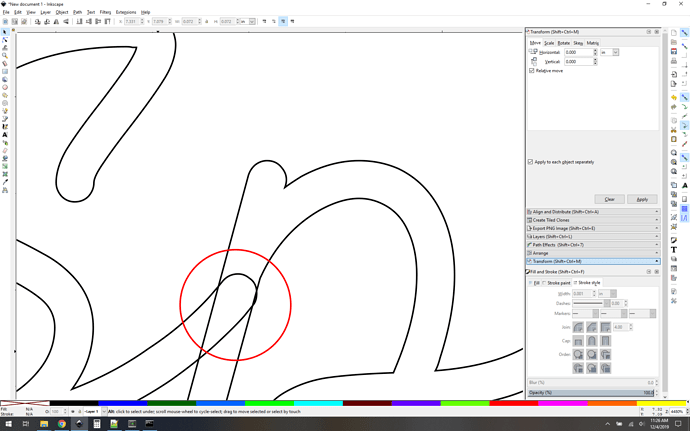 Leg on the Y is fine. Must be some sort of weird inkscape clipping thing, probably a way to fix it in some deep setting. 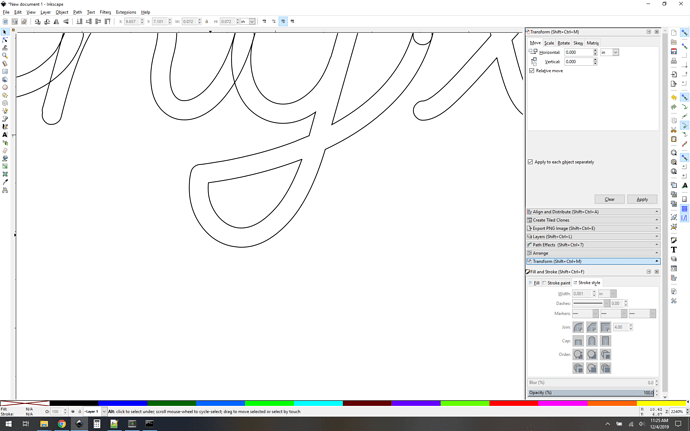 Another mismatch, and a total trainwreck on the swash of the K. That path would need to be repaired. 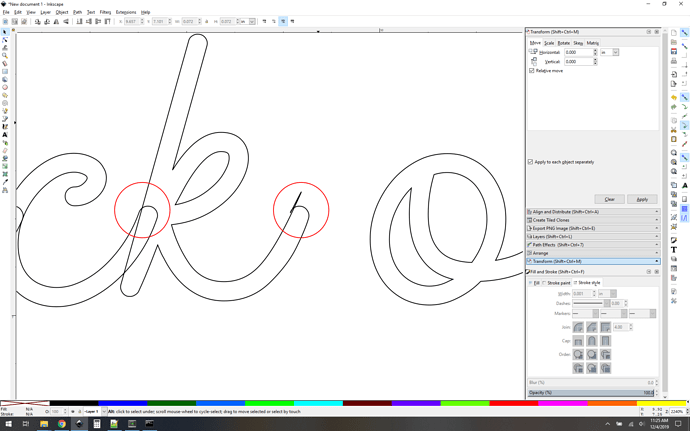 So, yeah there you go.

I am not familiar with the vendor.

Oh dangit! I am. I do not need more fonts.
(She said as she opened her wallet with a sigh.)

Ah! Thank you. I probably should have bought and looked at one before posting instead of assuming the person who shared it knew what they were talking about.

Wiki has a few good ones.

As far as I can tell–and please someone correct me if I am wrong–TTF/OTF fonts cannot be true single lines, i.e. open paths.

I’ve downloaded a couple of free font editors and tried to make a single-line font test… like, just a 2-node line, as a test glyph. The path is always closed automatically. And I didn’t like that answer so I googled all over and didn’t find any better news.

I feel like I have downloaded every “single line” font out there and when you do “convert to outlines” or equivalent in your editor, they all misbehave.

The only way I have found to make true single line text that behaves in normal vector editing software is that Inkscape plugin.

Not sure why they used “the quick brown fox” pangram instead of “sphinx of black quartz, judge my vow,” which seems more in keeping with the theme.

Yeah I remembered that thread at the time and chose it because you reminded me.

That is my understanding, too and, I have tried with professional font-making software, though not recently.

Hmmmm. Thanks for the heads up @evermorian and for the testing @evansd2, but since they are not true single line fonts I think I’ll take a pass. I have too darn many fonts as it is.

But if you ever do run across a single line font that behaves properly in Illustrator I’d love to know about it.

I never used one before, and it’s one of the options. TBH I didn’t even google that type of font yet to even have a slight clue. 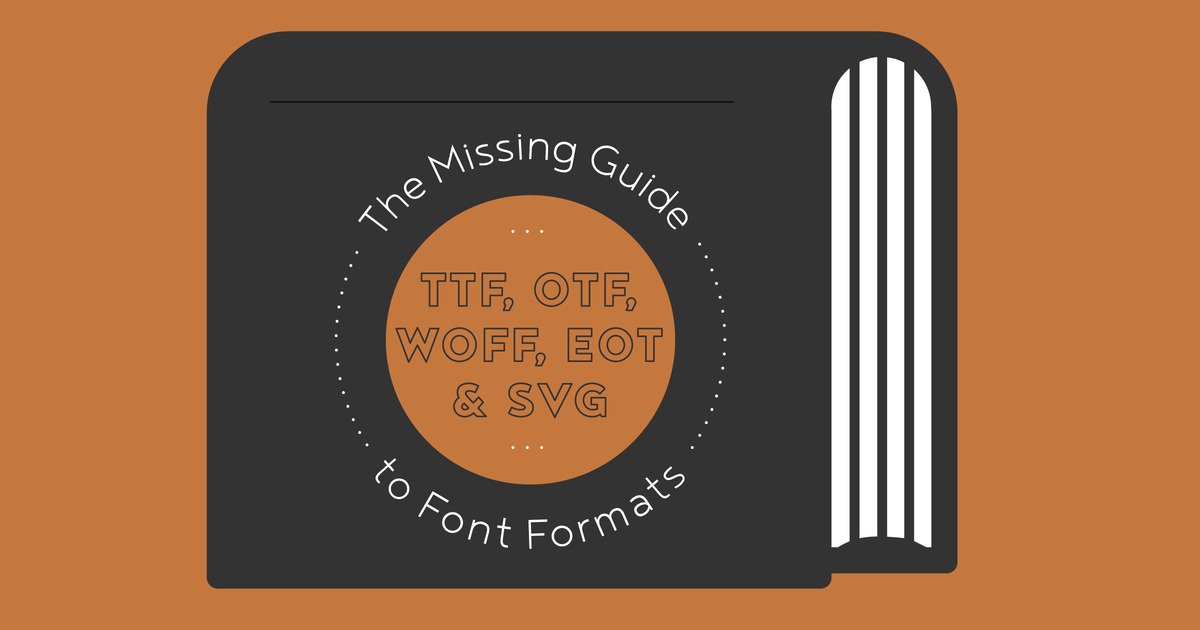 Ah, font formats! EOT, TTF, WOFF, SVG, WOFF2... There are so many choices! Unfortunately, despite the huge variety of formats, there isn’t a

WOFF is basically OTF or TTF with metadata and compression supported by all major browsers. It was created to live on the web. It is the result of collaboration by the Mozilla Foundation, Microsoft, and Opera Software. Because fonts are compressed, they load faster. Metadata allows for the inclusion of license data within the font file to address copyright issues. It is a World Wide Web Consortium Recommendation and is clearly the future of font formats.

WOFF2 is the next generation of WOFF. The WOFF2 format offers a 30% average compression gain over the original WOFF. Because it still just a recommended upgrade, it does not have the wide support of WOFF.

Listen, y’all be careful grabbing fonts from Design Bundle and Font Bundle. Very easy to grab fonts you already have again. (They don’t limit the fonts shown to the ones that you don’t already have.)

I did a little casual research out of curiosity. In case it is useful to anyone else:

it seems like one of the ways this can be handled is to make a single-line font in an outline font format like TTF. It renders strangely and, sometimes has extra lines added to close a shape. There are tools to fix those (like Inkscape extensions). I played with this a little in TypeTool.

For outline fonts that are of constant width, there are also tools to render the text into single-line vectors.

This person did some useful work on this in 2013:

A large amount of digital fonts is available for free on the web. One challenge with these fonts using a plotter is that the standard font... 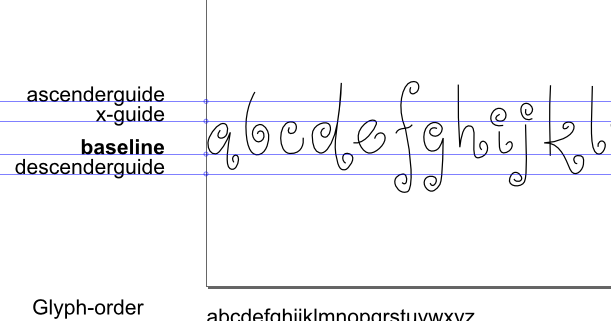 Extension to simplify font-creating with Inkscape

I previously posted a simplified solution for using Inkscape to paste multiple svg paths into svg glyphs to create an svg font which again ... 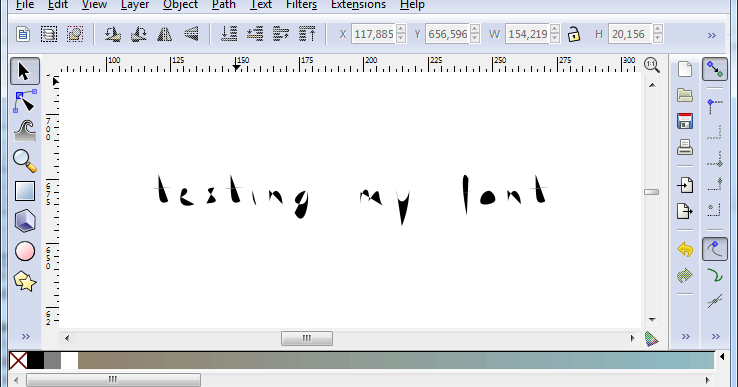 How to use temporary closed single line fonts

Single line fonts that are true single lined, but in the format of .ttf or .otf need to be closed paths to fullfill the requirements for th...

Lindsay Robert Wilson has this summary of available single-line fonts from a few years ago:

Of course, most people at all interested in this are familiar with the Hershey Text Inkscape extension:

These people make some commercial single-line fonts that work in a list of applications at the bottom of the main page:

I did a little research on single line fonts a couple years ago.

The search for true single line font sets goes on… (They can be scored instead of engraved, which is a HUGE time saver when you have a lot of text to process.) Good news - there’s a way to make them happen.

First, the only way I’ve found to make them work with Illustrator is through Rhino, which carries a fairly hefty price tag. If you have access to a student or teacher, you can buy the student versio…

Very easy to grab fonts you already have again.