Meet Moose. A thumb size bit of wooden moose that’s long lost both legs, one taped back on and the other completely missing. 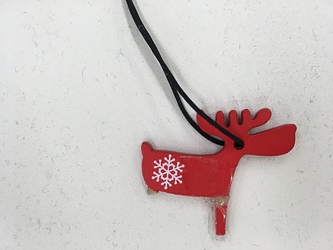 My co-worker adopted him years ago from a Christmas cracker, relocated him from office to office and now he lives on an office locker.

I felt for him; prostrate, unable to play with all his adopted brothers and sisters so Glowforge to the rescue.

A couple experiments cutting cardstock to confirm the model match the moose, that the toothpick axle was snug to the wheels but spun in the carriage, the wheels were the right diameter, and a few more for depth of the carriage pieces we had a wheelchair. 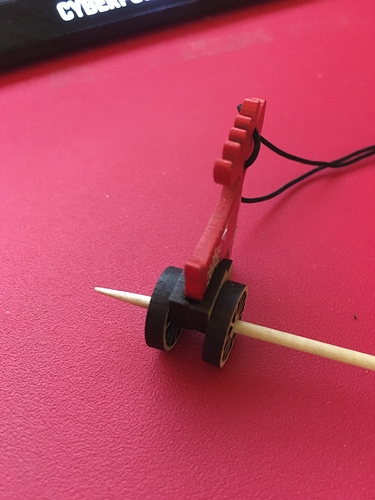 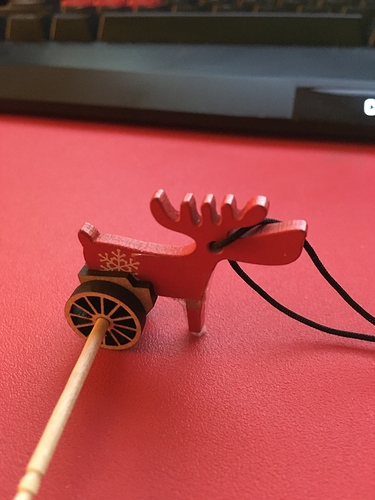 I needed permission to shave off the remainder of the back leg and to either glue the carriage together making it removable or glue it to Moose permanently. I brought the pieces and showed it off. Before I could say boo she’s found some glue and put him together, and clipped the toothpick.

Here is his current state. 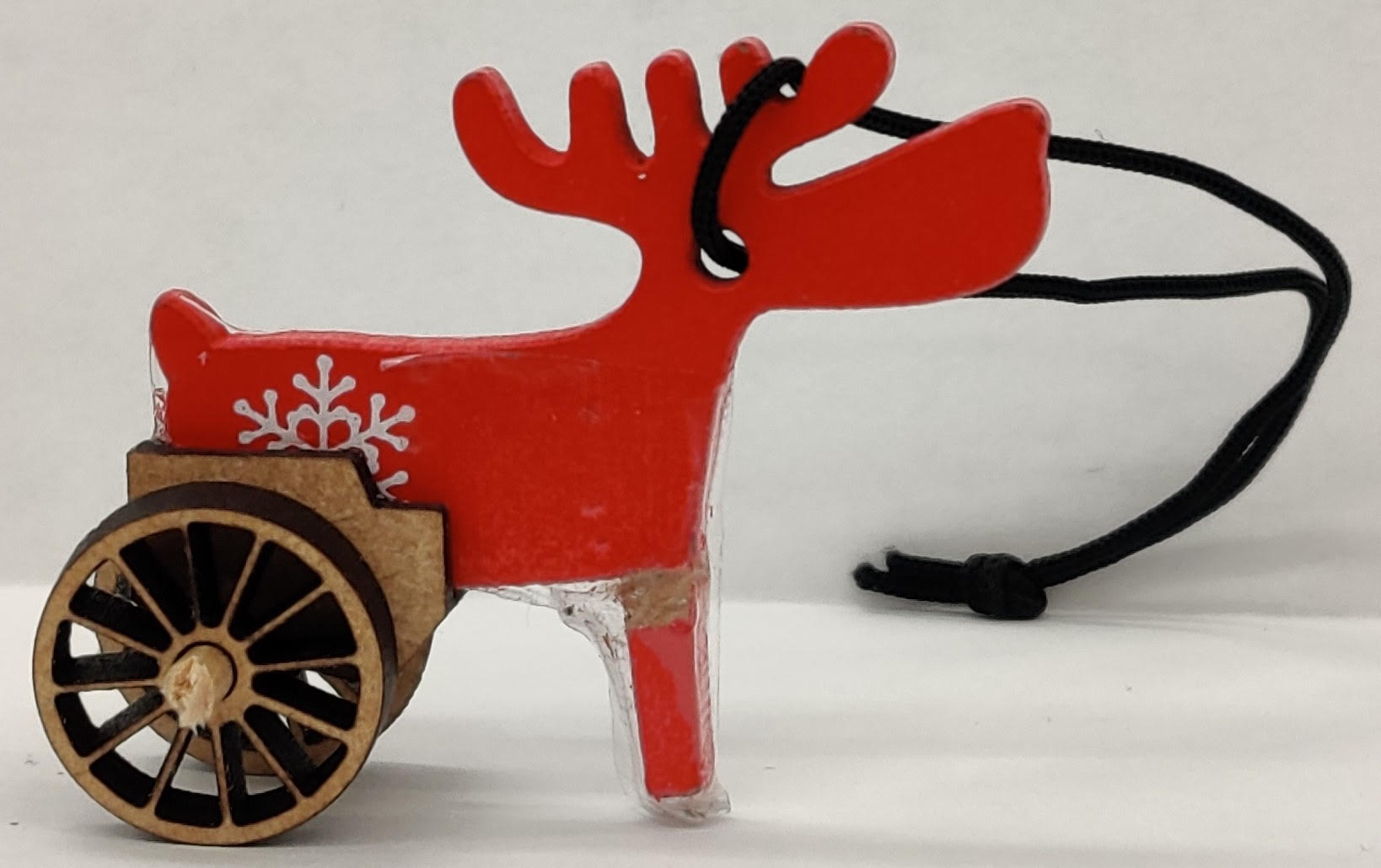 The wheels roll and she’s been playing with it like a kid who just fished out an early gift from the Christmas stocking. She’s a grown woman, not that far from retirement.

We need to sand off some toothpick and clean some excess glue but he’s now upright, can stand proud with his friends. I’m pleased.

Here are the carstock test prints, without the diameter testing:

Here is the final carriage burnt into draftboard:

You could re-create the whole thing from those files

Okay, that was really clever.

A moose rescue. Fits the season.

Thanks for story and file.

Good on you for rescuing one of our antlered friends!

This is too good to be true! I did not see that coming.

Way to give your friend a wonderful Christmas gift!

The wheels roll and she’s been playing with it like a kid who just fished out an early gift from the Christmas stocking. She’s a grown woman, not that far from retirement.

At first scan I thought it was the moose that was so happy (Which I suppose it is) but so much better that it is your friend as well.

That would have been wrong - the new moose wouldn’t have been the company’s moose. That’s why you don’t just bury the kids’ hamster and buy a new one pretending it’s the same hamster.

And it retains the history of the found & rescued moose that has survived moving and relos and reorgs and all sorts of corporate history.

At any rate… there should be another moose so he has a buddy.

If you had kids you’d know

Ummmm, yeah. No hamsters then.

That is so sweet. Love the wheels.

Mr. Moose has a new set of wheels! Now all the Moose are going to want to break a few legs so they can have a set too.

And can I just take a moment to say that I had to reread this line more than once becasue how you meant it is decidedly not how my brain interpreted it the first time through.

“I felt for him; prostrate, unable to play with all his adopted brothers and sisters…”

Wait, you felt his prostate why?!?!

Wait, you felt his prostate why?!?!

At any rate… there should be another moose so he has a buddy.

The original intent was to cut hundreds of new fully legged moose in cardboard and cover her desk. Thing is it’d look like a the scene of an accident. A bunch of bystanders in brown hovering over a red moose in pieces.

From there focus shifted to the victim.

Maybe next year I can leave a leftovers size box on her desk full of moose. She’ll have gotten over the novelty of this moose by then