While looking at the forum this morning I saw @joker post on his knife case and laughed because that was what I was doing today! 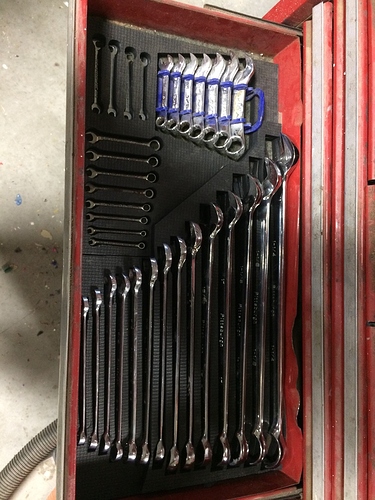 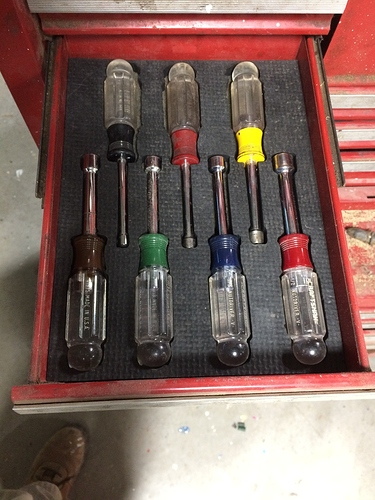 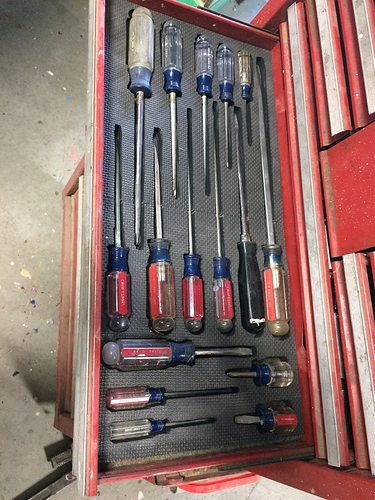 So my method was to cut a white piece of material the size of the drawer, arrange the tools on it, light it very well and then take a photo from directly above from as far away as possible to limit distortion. Then in Inkscape I drew a rectangle the size of my board and scaled the photo to it. Then I used the trace function. After very little clean up I sent it to the laser.
This worked great for the screwdrivers but not to good for the shinier chrome ones, those I ended up tracing by hand.
Tomorrow my plan is to place the tools on a light table to photograph, thinking the back light will make for some really clean trace outlines.

Sweet!! Looks mighty organized…now you’ll know when soneone borrows one of your tools…lol

Maybe steal from the movies and use green screen?

Take some brightly colored paper and line the drawer (solid bright wrapping paper maybe? As long as it’s nothing like the tools color)

Lay out your tools.

Done? Chrome reflections might cause you trouble but if you lit it well you can lower the magic wand tolerance to be pretty tight.

Dunno, I don’t do a lot of raster in Inkscape. I tend to use gimp for raster and send that to Inkscape.

Nice job! Now only if I had enough drawers to put precision cut foam in to hold all the tools.

You have definitely inspired me.

Great organization Tom!
Now you can inventory your tools at a glance! Aircraft maintenance in the Navy required us to set up our boxes with a place for every tool, our name engraved on each one, squadron and toolbox number. If you worked on a jet and were missing a tool, that bird is down until that tool is accounted for.

What type of foam are you using. I’ve read that many foams can be quite hazardous to users and hardware when laser cut.

Thanks, I’m a third generation maker and have a lot of space. I am not an organized person by nature:-). So what has happened is there are so many tools there is no way anything can be accounted for. Not in that screwdriver drawer is about 30 broken screwdrivers I tossed and another 60 or so I just put in a box.
I’m hopping having less and places for those I can stay a little more organized.

@mike10 I’m not completely sure. There isn’t any chlorine/chloride in it, that would be my major concern. 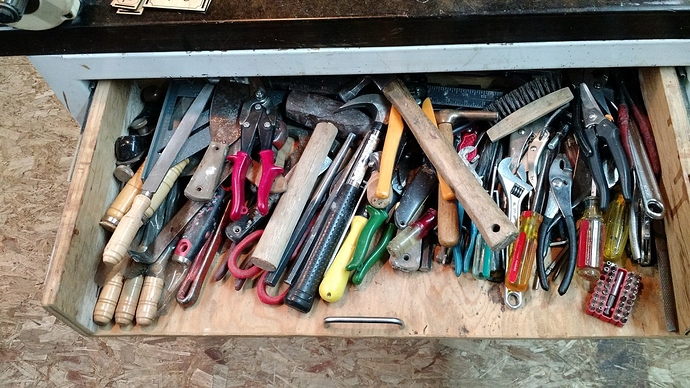 I was wondering where my tool drawer wandered off to.

At least they are all pointed the same direction.

Hey! Get out of my shop!

I have the exact same tool chest in my woodshop. Back in the day when it was new I had that same screwdriver set. You have done well to keep them this long.