A customer who once owned a '67 Jeepster requested a memento of it in fridge magnet form.
They wanted lots of detail, so I took it a bit further than my past frontend pieces and cranked up the character. I think it looks pretty good in maple. 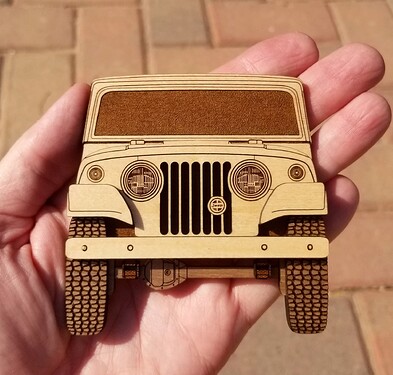 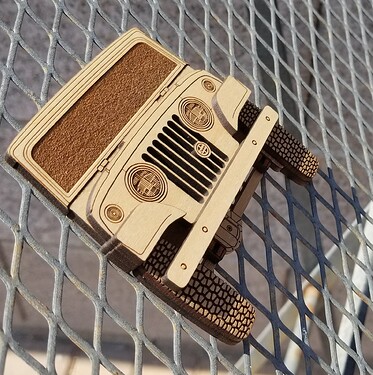 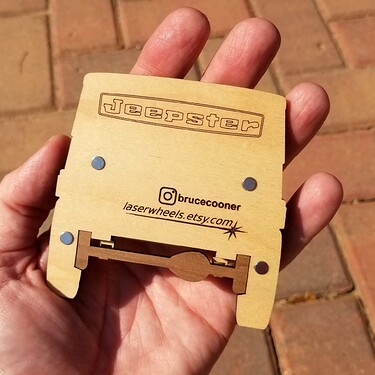 A friend whose mom has received my (non-automotive) work as a gift but knows I make, as she says “car stuff”, asked me to design a personalized gift for her friends’ 50th wedding anniversary.
She wanted a plaque that incorporated a Jeep CJ7, as they used to own one they wheeled in with a local club, but other than that she left the design up to me.
The result is about 5 x 7, and used cherry, walnut, basswood, maple, and a little bit of draftboard (I think all the types of woods GF sells

)
She loved the piece, and getting to give her friends something so unique to celebrate their special occasion. 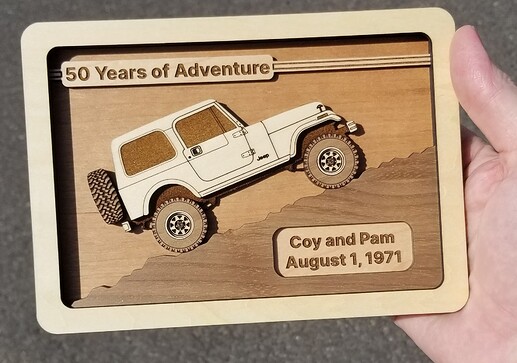 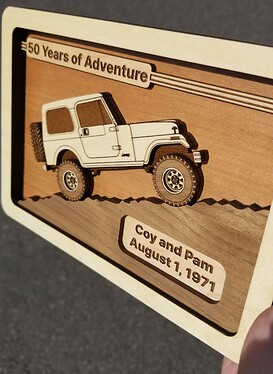 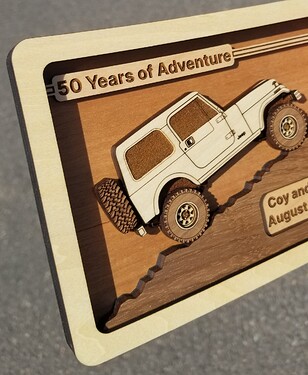 Earlier this year, someone requested a reproduction of their father’s rear engine dragster. It took some iteration to get the graphics to look right but they loved the result. 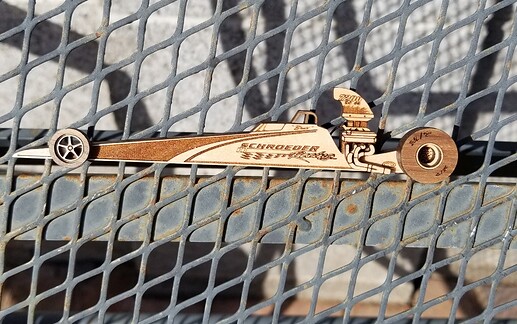 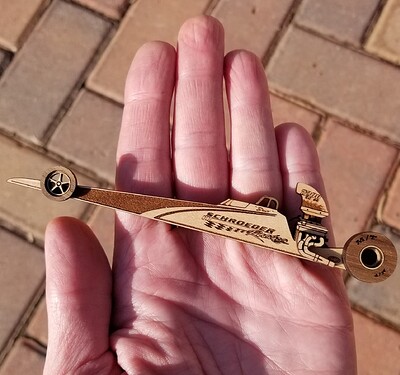 The teeny tiny exhaust header on the dragster was one of the most satisfying things I’ve made on the forge, oddly enough.

I want to do more in the larger format, but I still love working on the smaller pieces, and was pretty pleased with my palm sized FJ60. 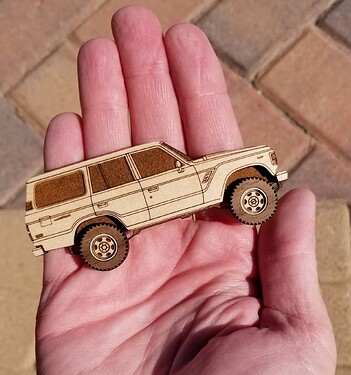 I’ve been amazed at how reliable ole’ Glowface has been in the nearly 4 years(!) he’s been running. On some steps his accuracy is a little off lately though, which really shows up in my work. But some new idler pulleys are on the way thanks to GF support, hopefully that and maybe a little belt tightening will get him back in tune.

accuracy is a little off

Can you explain this a bit?

These are terrific projects. I love the tread on the tires.

Fun! Those are cool.

These all look great!

Just about the cutest Jeep I’ve ever seen.

Curious…do you sell those? And, if so, how do you do that without copyright issues? The reason I ask is because I thought about selling some Camaro stuff, but I read some horror stories about people who got into some trouble for copyright infringement. Some almost lost their business. Maybe it’s only certain companies. The ones I read about were mostly doing Disney stuff. I also heard that Harley Davidson will go after you if you use their logo.

Wow these are fantastic! In the top Jeep pic the wheels look like they are real 3D wheels.

I created this Porsche 911 for my partner. Yours are on another level! 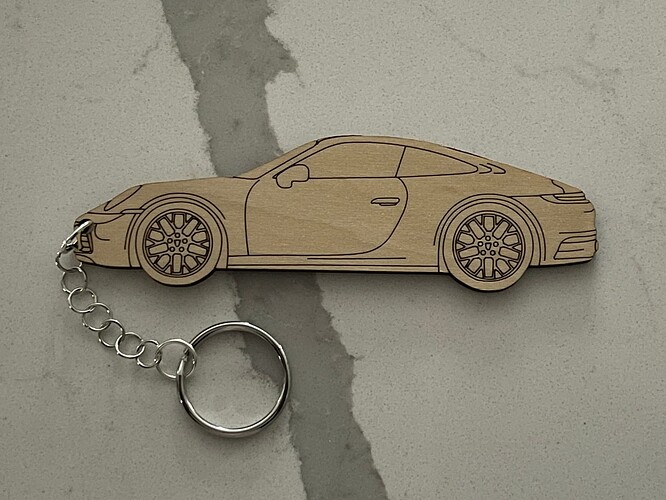 I sell a few of these in an etsy shop. I’m not sure if the shape of a vehicle is protected under copyright, it might vary from manufacturer to manufacturer. Logos and Disney (and other companys’) characters are surely protected though.

Wow, you really captured the character of the car, nice work. And really nice work on the wheels (I always spend an inordinate amount of time getting wheels and tires just so)

Thanks! I can see that you put a lot of effort into getting the wheels perfect, it really matters.

This one I traced from the photo on the configurator of the exact one he ordered!

Nice, I was wondering if the key fob represented one owned or wished for.
Lots of people purchase my work as gifts for someone who owns the real thing.

I recently made a little Lance 2465 travel trailer fridge magnet for some friends who have ordered one and are anxiously counting down the months until it arrives. 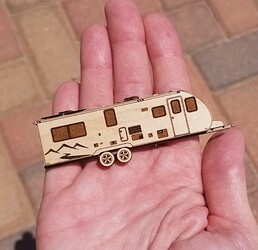 Then sometimes my designs are sometimes about my own wish fulfillment. I may never get to own an FJ60, but at least I can park a miniature version on my fridge.

If you look closely at the picture of the FJ60 I posted, you can see the door handles just touch the rear vertical line that wraps underneath them and back up to the line above. In the layout, the door handles are centered exactly between those vertical lines, which are made on a separate score step.

If I have a step located relative to another, it will sometimes (but not always) shift juuuust a little, sometimes horizontally or sometimes vertically, causing details to touch or leaving a gap where there wasn’t one in the design. I’ve seen it happen more as time goes on. It’s not always consistent from run to run on the same design either, making me think it’s a hardware issue. Maybe one time it can get the head spot on, the next the head’s inertia or some other physical force in the system might put it a little off. Or maybe the timing of the laser relative to reaching its begin/end varies a fraction of a millisecond between runs. Or maybe slight variations in the wood are causing it to burn differently. So many physical factors come into play here, I’m honestly amazed CNC devices work as well as they do at all.

It’s a mechanical device that’s been cumulatively run for around 300 hours, so the growing frequency of oopsies may just be wear on some moving parts, slack in belts, etc.

For larger pieces it’s not an issue. If I didn’t use my forge to make demanding tiny details sometimes requiring sub-millimeter placement, I’d never have noticed it.

Like I said above, there’s an issue with the idler pulleys support is helping me work out (major thanks to the support team!), I’m hopeful with a little tune up there I can get it more consistently closer to the accuracy it used to have.

It falls into both of those categories! Something he has always dreamt of and finally he is able to fulfill the dream. I bet they will love this but the question is will they put it on the fridge in the travel trailer?

I hope your miniature example gets to hang from the keys to a real one.

How awesome would that be?

My friends know I love a good adventure, so I’m pretty sure they’ll take the mini trailer with them wherever they roam.

A local artist and huge VeeDub fan in the Verde Valley of central Arizona once used some of my photography to promote an attraction in the area and repaid me with tickets to the attraction. I gifted her a little VW Beetle magnet to say thanks and, instead of leaving the magnet on her fridge, she stuck it to the glovebox of her Karmann Ghia that tools around one of the prettier areas of the state. I consider it one of the highest honors my work has ever received.

I once recreated a '66 Chevy van that had been turned into a mid-engined drag machine for someone who saw my work at a car/craft show. He ordered five examples, two to stick inside the actual van when he took it to shows. I thought that was really neat.

I hope your miniature example gets to hang from the keys to a real one.

How awesome would that be?

Yes this would be very cool but not sure it’s going to happen!

Awesome stories, thanks for sharing, just goes to show how amazingly good your pieces are!