My experiments with GF exhaust

My current setup for the GF is to use the supplied hose, and unfortunately there are 3 different 90-bends in this hose to get to a outside window. Total hose distance is ~7 feet.

I’ve tried three solutions for exhaust from the GF: 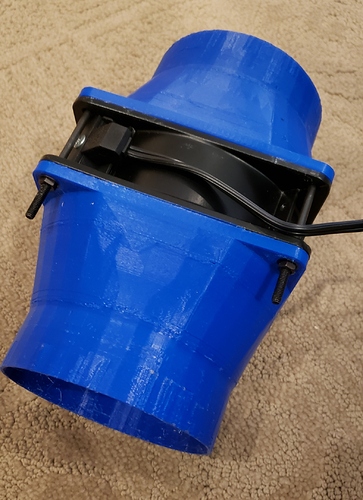 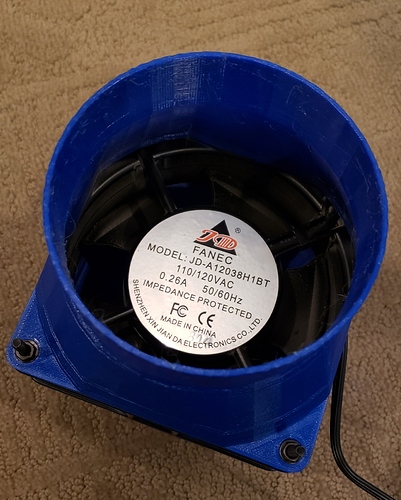 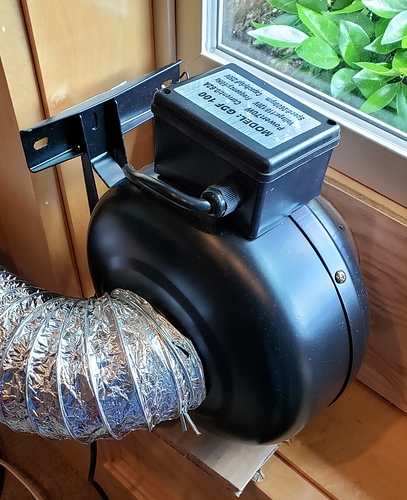 So, far I am satisfied with my #3 solution.

I do not think that having the Glowforge exhaust fan spinning is a problem as I have a similar Vivosun solution that runs most of the time and does pull my fan along. I did have a previous machine replaced that the fan was dead and the 200cfm Vivosun fan was barely adequate alone.

I also have a Blue-dry fan and filters that is 500 cfm and just running in the room cleans up any residual smoke or fumes. I intend for it to be the main filter eventually but it does a good cleanup job meanwhile.

How loud is the bluedri?

I’m seriously considering one. That or the Pullman Ermator A600, depending on how “quiet” one or the other is. The PE is higher CFM, but the design should be less loud.

I would go for the higher cfm as long as it is variable. Also check the cost of filters . At full throttle and open intake you can hear it over the running Glowforge but not by much

Thanks! How loud is it at the slowest speed?

My wife is asthmatic and I won’t to get a proper air scrubber that can go in the main living space for fire season. We were miserable in the Bay Area last fall.

My wife is asthmatic

You will know it is running but pretty much white sound to my tolerance is higher than squeals etc. I am also asthmatic and live by nebulizer a lot but the blue whale makes a big difference.

Now that I look at it, the BlueDri has activated carbon filter whereas the A600 does not. I suspect activated carbon is pretty critical for smoke stench removal. The A600 is likely quieter.

I’d recommend sealing the inline fan. I have the same, or very similar, fan and it has some pretty significant leaks in the housing. I used gaffer’s tape to seal it up.

I also ditched the GF supplied hose as the design kinda restricts air flow already. I went with a smooth aluminum bendy dryer tube. Much heavier duty and won’t get pinholes.

At some point, I’m likely going to extend the vent up to the roof. When I do, I might go full nuts and build a sort of fume hood around the GF using both the venting solution and something like the BlueDri to cleanup residuals.

Given asthma and likelihood of summer fire smoke I would pick up a blue whale even if there was no Glowforge involved. I was getting a bad reaction every time my housemate made popcorn but the blue whale eliminated that.

If you make the box I posted elsewhere and get some of that washable pre-filter the blue whale could take care of both fume and smoke entirely without pumping your furnace heating out the vent. Though it does have a nice 6" exhaust that could send the filtered air anywhere (unlike many that just dump it on the floor)

, far I am satisfied with my #3 solution

Nice solution. I’d swap out the spring clamp for a proper worm gear drive clamp. Gives more surface area to be clamped. An I’d also throw a wrap of HVAC foil tape around it too.

That would really seal things up.

That would really seal things up.

The small V8 bottles both seal tight and are quick on-off.

Solution to Odor Issues with Glowforge Beyond the Manual

As it turns out a slice through the middle of an empty bottle of V8 is exactly the perfect size to fit the exhaust with a very tight fit that takes only an instant to take off or on. [V8-exhaist]