My solution for a crank out window

After moving to a new home, I have been a bit out of commission because my office, where I keep my GlowForge had crank windows and I had now way to safely vent the GlowForge.
This totally caught me off guard since my previous window was a vertical sliding window and I had made this fun/simple/adjustable solution: 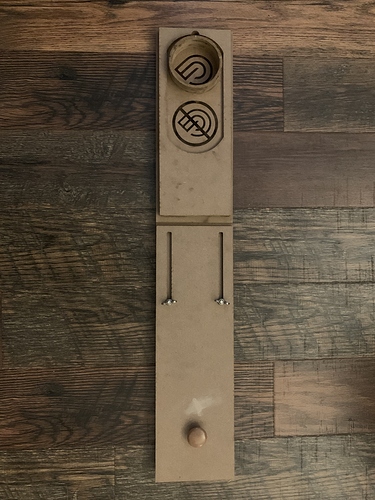 This solution allowed me to easily put the exhaust in the window and while it was there, I could even slide the vent open and closed.

However this design doesn’t work with crank windows. Now I had to go back to the drawing board. In addition, my wife asked me to minimize the impact and what was visible from the outside. So I after thinking about it quite a bit, I came up with this: 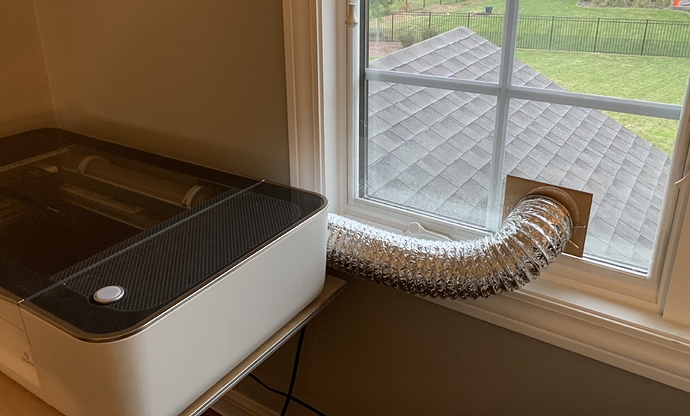 I was amazed at how little impact it has on the windows. In short, I put a piece of plexiglass on the screen. but before I mounted it, I cut a hole for the vent and using my GlowForge!I cut the mount and put it through the plexiglass. Now all I have to do to use the GlowForge is open the window. The plexiglass keeps it sealed, but I can keep the full view and the only thing you see from the outside is a very small square with a hole it it.

I mounted the plexiglass to the screen with white strapping tape so you barely see it and because it is on the screen, if I really want to, I can easily remove it. I don’t have to worry about cold air or water getting in because the plexiglass is inside the window when it is closed.

Now the only thing I have to do is make sure to open the window when I cut. I suppose if I forgot, it would be really apparent really quick as the fumes would collect between the window and the plexiglass. But lets hope I don’t do that.

If anyone would like them (and has vertical or horizontal sliding windows) I am sharing my designs for the old sash.

Here is the new one

I did a similar trick. My GF is in my basement workshop. I was going to just blow a 4" hole above the foundation sill next to the dryer vent, and install another dryer vent for the GF. But fortuitously, I smashed the glass in the casement window with my weed wacker by mistake. Solution - cut a chunk of 1/4" plexiglass the size of the window opening, hog a 4" hole through that for the GF vent, and install in place of the missing glass. Caulked around the edges after installation. I put an auxiliary fan on the back side of the vent, so I can run the GF with the internal exhaust fan shut off and pull the smoke from the far end of the vent hose. This keeps the hose at negative pressure and zero smoke escapes. In my original configuration I had the GF pushing with its fan and I had a little odor escaping. I installed a magnetic dryer vent connector on the input end of the auxiliary fan, so when I’m not using the GF it’s not connected to the outside air. I made a separate flat cover that goes over the open end of the connector on the fan, so I don’t have cold air coming in to the basement when the system isn’t being used. Been working great for a couple of years now.