My take on the Dice Tower

I’ve gone through a few different iterations of dice towers, including trying out a few posted here in the forums, but eventually decided to come up with something different. My son goes back and forth at being a Star Wars fan (Percy Jackson is his latest obsession), and since I’ve been trying to spend more time with him playing games, I came up with this model.

EDIT: Forgot to mention that this is with medium Proofgrade Draftboard, and Red opaque acrylic. 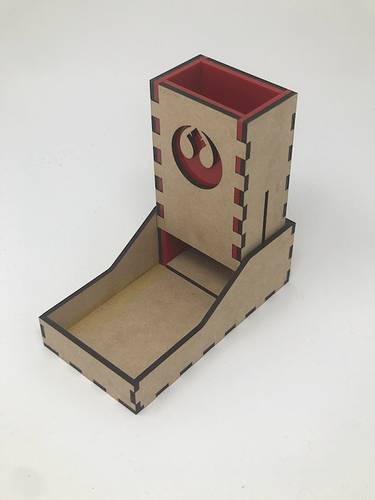 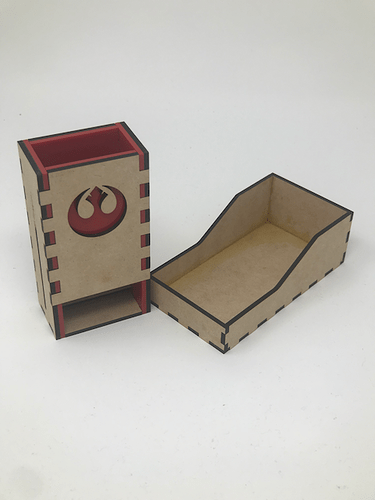 I’ll probably play around with this some more and come up with different designs, but I definitely need to make the tray shorter, so that it ends up being the same height as the tower when closed. 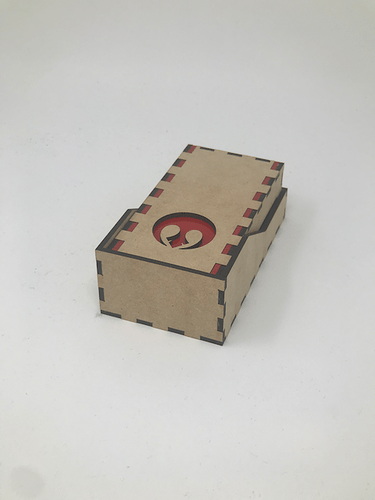 i do like that acrylic inset. especially in the finger joints.

Me too! Very unusual treatment!

The first one that I made was just a box made of Draftboard, with the Rebel logo engraved on it. I made a mistake on measurements, so it didn’t go together correctly, but even looking at it, it seemed kind of flat.

I looked through Dice Tower pictures online and found a few with inset designs that I thought looked cool, so I decided to try it out.

Very nice! My children range from a teenager to a taxpayer

I’ve only had my Glowforge a couple of weeks but my adult son has requested a dice tower for playing Magic (which of course, I’ve never played), so I have been following these threads closely. Hopefully, in a few more weeks I’ll be ready to tackle one for him.

Oooooh…you definitely want to surprise him with one of these:

I made a counter to track life points in Magic: the Gathering from 20 down to 0. The design uses planetary gears, which are pretty neat because they rotate without needing an axle. The SVG for the mechanism design is licensed under a Creative Commons Attribution-ShareAlike 4.0 International license. (See this follow-up post for attribution info.) [IMG_2423] [IMG_2426] It’s very fun to watch the little dials spin around. I made a video of it in action [life%20tracker%20(no%20copyrights)] T…

I have it bookmarked! I have many, many things bookmarked LOL but that is one I plan on coming back to sooner versus later.

I think I have read every post on this forum and facebook 2 or 3 times in the last few months, including going back and reading as much as possible. Can’t tell you how much I appreciate the wealth of knowledge shared.

Very cool design. Love the Rebel logo on the front.

You will never regret the time you spend, you will grow to regret you didn’t spend more.
Cat’s in the cradle you know?
Really nice design on that! I may have to emulate it.

That would be perfect for Imperial Assault.

That was the game that I was originally designing it for.

Woohoo! Our group is mid-campaign at the moment, with the Rebels carving massive swathes of destruction through the Imperial ranks. It’s a fun game, but we’re hoping to use it as a gateway drug for D&D.