Has anyone ever replaced the green board on the inside left of the machine?

It has been done. Have a problem?

There was a project to entirely replace the GF circuit board with a new 3rd party board, but unfortunately the project shut down (not enough community interest) after producing a few prototype boards; someone here might have saved info on that (I, being stupid, failed to do so).

If I’m not mistaken, I seem to remember the company was able to supply that replacement board to @raymondking32 .

Glowforge has been kind enough to send me replacements for that board, yes, you remember correctly!

Hello
I’m being told that my circuit board has to be replaced as well, would you be able to tell me how you did it??

Well to make a long story short Glowforge replaced my machine after another board didnt solve the problem My machine was still under warranty but at first they werent going to replace it. From the pictures I sent them they said I had put a material in my machine that had caused corrosion and I told them that , that was bullshit because I had only put wood, Acrylic, and tile. So after about 4 weeks of back and forth with them they finally sent me a new machine. I found a video on you tube but I dont have it anymore where a guy shows how to take the left side of the Glowforge panel off. It was very easy to do. Then you can get to the circuit board real easy. Go to you tube and try to search how to remove Glowforge circuit board. You will find it. And good luck with that because they never want to admit when they are wrong.

Thank you, that’s exactly what they said to me, they said i put vinyl in it which isn’t true i actually have 2 vinyl cutters. I’m hoping to have them send me out a new machine as well. Thank you so much for responding at least i know I’m not the only one they’ve done this too.

I found out that where the board is located is a bad design on their part. All the smoke and all the tiny pieces that the laser zaps get pull out the exhaust and right over the circuit board. Like I said…A BAD DESIGN ON THEIR PART. The board is right in front of the exhaust. My advice to you is … if and when you do get a new machine make sure you keep the circuit board clean. Top and bottom. The bottom is where the problem is. Because its so hard to get to dirt builds up on the pins of the circuit and if enough build up there it can short it out causing all kinds of error readings. Mine was it was “Overheating”. But it really wasnt But in any case the machine would not work. So make sure you keep it as clean as possible because from what I have found out from the past 2 years is thats the reason for 95% of Glowforge problems. Dust. Hope you get a new machine and keep it clean. Best way I found to keep the circuit board clean is a soft paint brush and a can of Air.

Thanks for the additional info, at this point they are still only offering to send out another circuit board i am hoping this fixes the problem, i let them know that if it doesn’t I’m expecting another solution other then buy a new one and i will keep fighting. I wonder of anyone has actually replaced the board and had it work correctly? I refuse to believe that they can diagnosis the issue from some pictures especially since they are wrong.

The pictures just help visually. Support has access to the machine logs generated as the laser operates, that’s how they can troubleshoot remotely.

“Vinyl” refers to PVC, polyvinyl chloride. many “plastics” are PVC. It’s the chloride that’s the problem in a laser. when vaporized the chloride mixes with atmospheric moisture and becomes hydrochloric acid. Even a little will destroy the electronics, but it will corrode everything metallic.

Before you laser any “plastic” ensure it isn’t PVC.

I have cut ANYTHING that wasn’t laser safe no plastic at all just wood & acrylic all laser safe. It’s complete bs i have received emails from other people since posting this that it has also happened to who also didn’t cut things that weren’t laser safe. I’m going to continue to fight because i did nothing wrong.

I have talked to a guy on the forum and he had 2 machines with the same problem. He told me that both machines were fixed with a new circuit board and he had put electrical tape on the back side of the board where the pins had collected dust and shorted out. He said since he put the tape on the board he has not had any problems since.,

Sorry for the late reply, yes, I’ve replaced mine and had it work. Mine was diagnosed through the logs by a group of people that were on an alternate version of the forum, unfortunately, that group has disbanded. Not to say Glowforge was incapable of diagnosing my problem accurately, I think that this is a problem that’s rare enough that when it does happen, there are multiple fail points that it could be, and the logs can only give so much information.

Anyway, there are only 3 screws holding this board in place, so it’s not too complicated to do for yourself, but you also risk damaging the cables, and some of those are a much more involved process of replacing. Originally I removed the glass panel of the GF to access the board which gives you direct access to it, and I would recommend taking a photo of where each of the cables are connected and how they lay in the machine. It’s possible to access the screws without opening the machine, but you’d need a half sized screwdriver, and a way to get good torque on it to get the first rotation - my screws were fairly tight.

The process of removing the glass panel can be difficult, but there are guides here and on YouTube for doing it; easy enough to use the forum’s search function to find one that is comprehendible. As far as I know, I was the first, or one of the first, to request the part so it took me a while to get it, and it came from a used machine, which ended up not being a problem since it has worked ever since. As Jody mentioned, I put black electrical tape on the solder joints underneath, because upon inspection of my broken board, I noticed corrosion buildup where the machine sucked the smoke through. I live in a humid environment, so this buildup can retain moisture, and electronics aren’t a fan of that.

Good Luck…It took me five weeks and the board was not my problem either. They were not going honor my warranty at first but after I kept arguing with them they finally realized that I was in the right and had not put any material in my machine that was not laser safe. Good Luck.

My Glowforge pro was overheating right on the start of a print even though there was no heat in the room with an ac on. Its never been able to work since then. Unfortunately for me, my printer is in West Africa, Ghana and for that reason can’t be shipped back. So they want me to purchase a new circuit board but they can’t advise on how to install that. So they directed me here instead. And its not even guaranteed that will solve my 0verheating issue after that.

Mine did the same thing and they had to finally send me another Glowforge. If there a lot of dust under the circuit, it will short out. Mine did. I got a new board from them, and it didn’t work. After raising hell with them for a month they finally sent me a new one. This is my 3rd Glowforge and I wished I had never bought one. Very poor design on the placement of boards and how they get dirty. All I can say is Good Luck with them because you will need it. And they take their time about getting back to you.

which board do they want you to replace?
on the left side or the right side?

how much did they charge you for the board?

I am in the middle of stripping a glowforge basic down for parts, I may be able to offer you some insight. 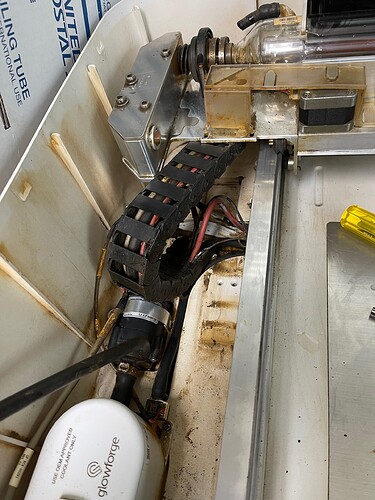