For my birthday my wife got me a Sous Vide ( https://www.amazon.com/Anova-Culinary-PCB-120US-K1-Bluetooth-Precision/dp/B00UKPBXM4/ref=sr_1_1?s=home-garden&ie=UTF8&qid=1475470027&sr=1-1&keywords=avona+sous+vide ). I’ve been wanting one for years, and my primary reason, because of the precision temperature needed, was to try and temper chocolate with it. That was my first test, and while I didn’t get to run through the whole temperature range I wanted, the piece that I tempered is holding quite nicely with no bloom! So if I run through the whole process correctly, I should be able to perfectly temper the chocolate every time! And without the $900 tempering machine!!!

Today’s experiment was chicken, and it came out perfectly!

I have a Sansaire and the liver pate it makes is my killer app that proves it’s worth. Hadn’t thought about chocolate tempering. Thanks for sharing.

Anova is a great choice, I have three of them and I very pleased. Congrats. 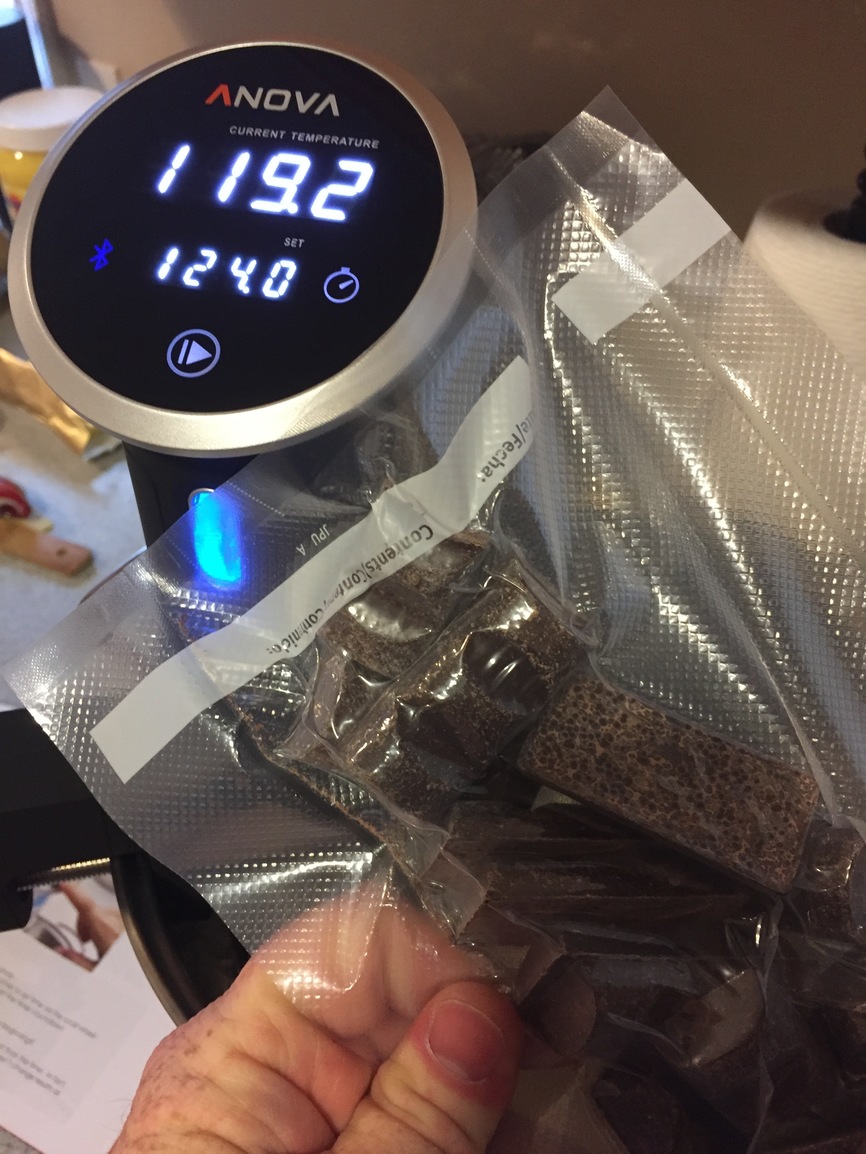 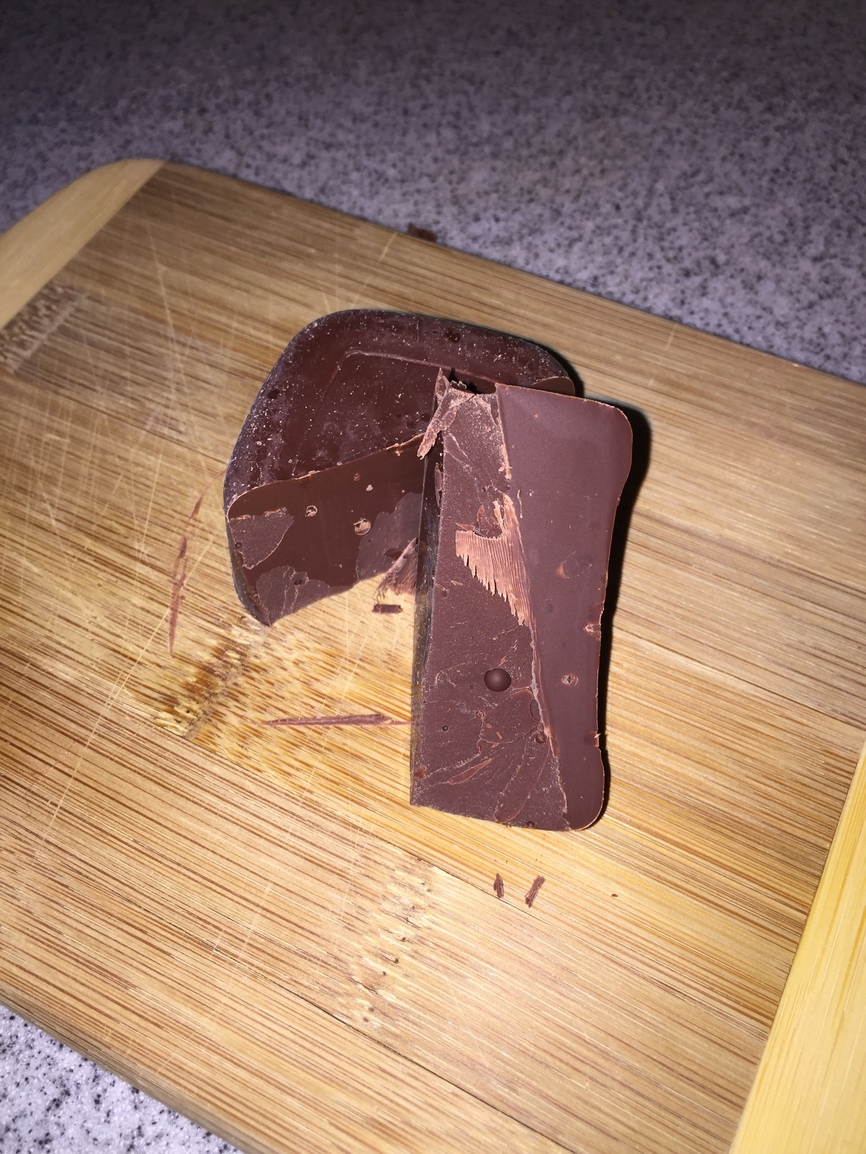 I’ve had my Anova for about 6 months. Love it! I don’t love the IOS App for it, but having it on WiFi is great. I’ve had some really good steaks and chicken made with it.

When I get home I’ll grab my creme brulee recipe. I did it in the anova using mini mason jars and it worked perfectly!

Creme brulee is my favorite thing to sous vide. I personally use the ChefSteps recipe and am curious to see yours.

Mine is actually a modified version of theirs! I took the recipe I had from working in restaurants and used their sous vide instructions to do the actual cooking!

I got one as well for xmas

I make a pretty mean creme brûlée! I’ll definitely have to give it a try in the sous vide!

I know following the chefsteps method for cooking worked fantastically for my recipe! My next one (whenever I get time) is cinnamon buns

I’ve had a Sansaire for a while now. I pretty much only use it for steaks, but it sure is awesome. Can’t wait to try and use the Glowforge for the final sear.

I’ve had an Anova for almost a year now. Haven’t used it for cooking yet though. I use it to heat my sparge water on brewing day. Works great and has allowed me to move from using lp gas to all electric.
All the recipes I’ve looked at seem to require cooking over night. Being that I never decide on what’s for dinner until at best a couple hours before hand, that makes its use some what limited for me.

All the recipes I’ve looked at seem to require cooking over night.

ChefSteps and Serious Eats will keep you busy.

Fish for 30-60 minutes, chicken, beef and pork for as little as an hour… You can do a lot same-day, and you don’t even need a vacuum sealer for a cook that’s a few hours long.

(I’m an electric brewer too… or, I will be as soon as the system I ordered is actually built and delivered.)

I love mine. The connection to the iOS app was a pain though. “Simply crawl under your desk or roll the ANOVA and your phone under there so it’s 2in from your impossible to get to router. Also pretend Bluetooth has something to do with your router!”

Once that was taken care of I’ve been all in. We need a recipe thread for sure. I’m trying to convince my wife to let me sous vide the Thanksgiving turkey this year.

My wife did the research and found that the wifi option was overpriced and didn’t provide much benefit. The one I got is Bluetooth only and was very easy to set up with the app.

The chicken I did yesterday was in the water for a couple of hours to defrost, then I seasoned it, vacuum sealed it and it cooked for probably 3-4 hours, but was probably done in 1.5-2 hours.

I have a hodge podge of pieces that together work as a souse vide, and I love it! Makes a London Broil as tender as a Filet Mignon…

I’ll look at more recipes. I’ve heard nothing but good about this cooking method.

On a side note, you’re building your own electric brew system? I though of that but after stumbling on the Grainfather (another GF) I decided to go with that. With the U.S. version is only 110v so you don’t get to temp fast but otherwise I love it.

On a side note, you’re building your own electric brew system?

I decided to pony up and buy one. I have too many unfinished projects already, and if I tried to build my own electric brew system it would be a pile of parts for 6 months.

Wow, that’s quite a setup, you aren’t messing around.