To all of you including the big man Dan! I am really curious to see if your all working on a Larger Glowforge, meantlarger bed size deeper body for tumblers and so forth? Bigger tube? Let us all know I would like to stay with the same company! Thanks Dan and hope we can hear from you on this subject!

Glowforge support does not monitor the forum. You can send an email to support with your question.

Glowforge is very tight-lipped about future products or improvements. It’s unlikely you’ll hear about any new hardware until it’s ready to purchase. To get news as soon as it’s available, subscribe to the announcements forum. The CEO posts what’s new and upcoming at Glowforge every month or so:

This category is for major news, announcements, and updates by the Glowforge team.

All of the above.

In addition, consider they are targeting a different market. Crafters don’t need a larger machine with a rotary. There are already commercial products in that space.

You don’t find commercial lasers in Michaels or Joanns. Same with Cricut or Silhouette - and there’s nothing wrong with that. Just a different target market.

I hear you but, I have looked into all brands and Glowforge would literally take the market even more, look at the Full Spectrum Titan, do that with Glowforges camera and ease of use and millions of people would come running same as when they first launched! I was just hoping they were working on it was all!!

They could be, but it would be highly unlikely you’d know until they were ready to sell it.

I know! I’m about burnt out on doing research on lasers! Just hope I don’t by a different brand and they come out with a larger one!

If you do, they will.

If you wait, they won’t.

For sure, for sure

There are quite a few of us that would like a bigger deeper bed, and more power.

look at the Full Spectrum Titan

That company rebrands Chinese lasers I believe. Wishing to copy glowforge’s success, and aside from a couple of innovations, they copied the product and did a poor job of it. They badmouthed the company’s product and offered $100 discount to anyone who would cancel their glowforge order and buy theirs. FS eventually sold their failed effort to Dremel if I remember.
Glowforge builds a quality US built laser, and is run by a CEO who’s business ethics I admire.
IMO, there is nothing about FS glowforge should emulate.

There have been a few folk with post-warranty machines that did major modifications in that way but even the ability to get repairs is lost when that is done.

To all of you including the big man Dan!

You have to address him as "Big Man @dan " to get his attention.

This made me LOL for real. So true!

If you do, they will.

If you wait, they won’t.

Big man Dan CEO! You all have to be with me on this!

I don’t want Glowforge to make larger machines, or machines that are more like industrial lasers. That market is already well served. I want more stuff that fits into a small crafter’s home workshop. More print head options for the Glowforges we already own (diode laser, router, pen/marker holder, blade cutter, inkjet printer, 3D extruder). Maybe a compact rotary diode laser, half the size of a Glowforge, just big enough to do tumblers and other cylindrical objects. Whatever they make should feel at home in a Michaels or Joanns IMO, and cost less than their current lineup. Let the giant 4 foot wide CO2 laser be their top end product.

That actually sounds pretty awesome! I wonder if that is possible in the future?

I wonder if that is possible in the future?

The carriage plate having a magnetic attachment and pluggable data/power cable implies that the print head was intended to be swappable from the start when they designed the machine. We’ve got this great CNC platform that could be moving around any number of tools using that plate.

Neither the cable to the head nor the distribution board it ultimately connects to have the power to run a dremel hand tool, let alone a productive router.

The X-axis mechanism is already close to its limits with the weight of the head alone.

Could such a machine be created? Sure! But it’s not the Glowforge as we know it, and would be significantly more expensive.

Could still do knives and markers.

A cricut is a really good pen plotter, and the entire rig is probably less than Glowforge would charge for a pen head.

Alternatively you can get something like an axidraw or a more dedicated pen plotter. They are compact and capable machines. 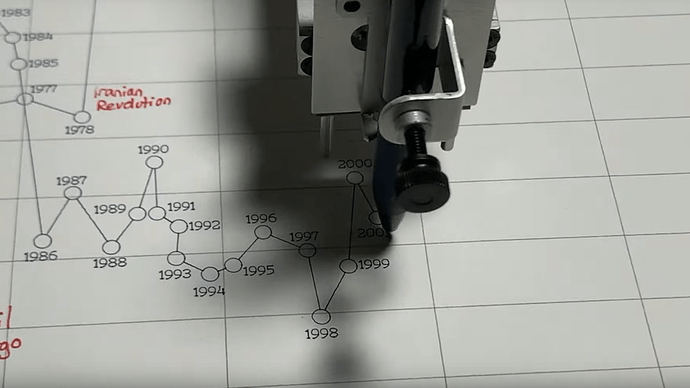 Pen plotters have developed from fragile devices into powerful artistic robots! Read on for a list of some of the best XY plotters around.

That being said having a hot swappable pen head would be slick because you could do plot+laser ops on a single material in the Glowforge.

Anyway it’s all a pipe dream, my gut says that they aren’t even thinking of pursuing alternate heads.