It’s pretty nice at night as well. This is a little lake just outside of Ruidoso called Grindstone Lake. The clouds mostly participated and let the Milky Way come out to play.

Not the darkest skies I’ve been under but can’t complain. I think that’s El Paso glowing in the distance. I thought Alamogordo at first - but I know they are very strict about light pollution due to the aircraft flying training missions. 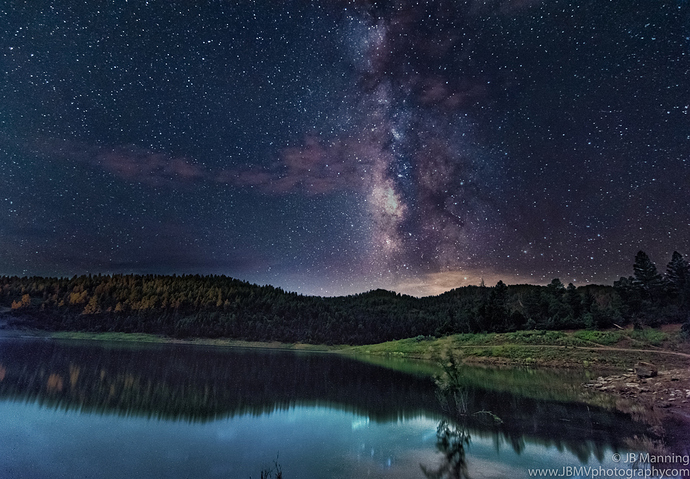 I feel ya about the light pollution. I tried to capture the Milky Way last week when I was about 30 min west of Denver up in the mountains. This is the best I could do:

Milky Way with flashlight 2048px.jpg1575×634 923 KB
That’s Denver’s lights on the right. (I painted the trees on the left with a flashlight in a time exposure to get them to show up.)

That is so beautiful! I live in town and see very few stars on a regular basis, much less the Milky Way.

What she said. Those are both beautiful night shots.

Most of the USA, I think I’ve seen 80% cited, can’t see the Milky Way from their residence. I’m lucky enough to see it from my front porch. Definitely one of the things that I love!

Are you planning to shoot the upcoming eclipse?

I’m debating on what my plans are. I have a couple of friends road tripping to Jackson Hole, WY - so have considered that. I can’t imagine how many people are going to be up there in that area for that though.

Nothing like a little pressure - ~1 minute to make sure you’re completely dialed in.