Is it a creator’s curse to never be satisfied with a final design, or is it just me? Ever since I made my logo I’ve done small revisions here and there. It started as small fixes in the imperfections, then simplifying it so that when I compressed the size it wasn’t muddy on my lasered cardstock. I was happy with what I had for a while, but still wanted to do something about it eventually.

Then in November I was tricked by the beautiful new iPad design and I bought one with a new Apple Pencil as a companion to the Glowforge. I figured that if I was going to be more serious about making the Glowforge my primary source of income, then I needed to begin hand-drawing my own designs (at least on something bigger than my Galaxy note9) in a more organic way than with the previous tools I had been using. So I began with small things such as pretty cool earrings (I’ll post about those eventually

), and then I decided I was going to take on my logo head on.

Originally I had just used a random image on a google search for my fingerprint design, and a quick signature on a sticky note uploaded through my scanner and threw them together in Photoshop. The problem was that the fingerprint was far too detailed, and as I mentioned, got a little hard to decipher when made smaller. My signature wasn’t satisfying to me, especially because it didn’t really represent my signature, but something that I kind of did in a hurry out of excitement, I mean, you can’t even tell that there is an “a” there!

Okay, so I knew what I wanted to fix; which of course, was my entire logo! I began hand drawing a fingerprint, which if that sounds like fun, it’s because it sort of was. I stared at my own thumb for inspiration and just started drawing lines until I had a basic outline of my thumb. Then I filled it in with detail lines, but I didn’t want it too cluttered, otherwise I’d be back at square one. So I came up with a rough draft of what I wanted (which at the time was another final design

) and used the old signature, because really, I didn’t mind at the time. That’s when I began noticing my signature at work was entirely different than the one I was selling to people, so once again I went back to the drawing board (literally!). I stayed up the night of New Year’s Eve and decided that the simplified version of my fingerprint actually should be a bit more detailed and worked on that for hours, the following day I analyzed my signature and decided which route I wanted to go in. I have three distinct signatures, and had to decide what elements I wanted of each one. I mean, I don’t want to give my literal signature out, but a hero signature was what I needed, so that’s what I spent hours also working on. Is it perfect? No, but I’m not a perfect person, and I’m definitely not going to be selling to perfect people, so who cares anyway

Guess this is kind of long post for me wanting to share my creative process, but I just thought if someone could understand, it was probably the lot of you. Here’s an image of the evolution of the logo, which, as my wife said, “this is it…until you decide to change it again” (she knows me too well 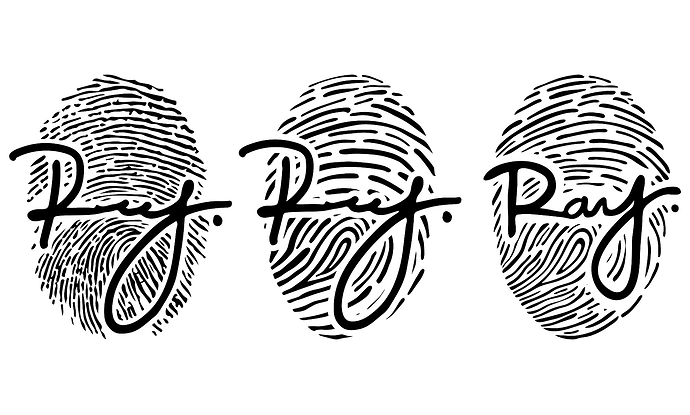 I’ll still end up using the middle fingerprint for smaller stuff, but I’ll be updating it with the new signature, and maybe tweaking the thickness of the lines and, and, and…see there I go again!

Still, thanks for the creative influences and the support. This community never ceases to make me feel good about what I’m doing!

I was tricked by the beautiful new iPad design and I bought one with a new Apple Pencil as a companion to the Glowforge.

I was tricked too. I love the new iPad and Pencil. I upgraded from a 2015 iPad Pro. I am anxiously awaiting the Adobe Photoshop app.

All 3 logos work well. Nice write up, and tells me that I need to use my iPad pencil for more things.

The newer designs definitely look cleaner. I love my Apple Pencil, but I can’t draw to save my life, so… not quite the most useful tool for me.

I enjoyed reading your story and I ‘get it’. My own logo was barely readable when engraved on card stock, especially. Rather that just making it larger and larger, I had to tweak the lettering in it. Not all things are as they seem.

I also upgraded from the other model, and had a pencil for that one, but just never felt like I was good enough to use it to draw. The new one makes me feel less like a below average artist and more like…well an average one

I am anxiously awaiting the Adobe Photoshop app.

Oh, yeah, definitely with you there. I’ve been using Adobe Draw which is actually really nice once you get used to the layers, but it’s palm rejection needs work. I also use Autodesk Sketchbook which actually has a pen only mode, but the options are kind of overwhelming. It offers so many different mediums to draw with that I ignore most of them to make it easier to eventually vectorize. I’m much better at line art than regular are, that’s for sure.

tells me that I need to use my iPad pencil for more things.

I got an Apple Pencil for Christmas 2017 and like my best friend who got it for me said, " you’re never going to use it." I actually really only used it a couple of times, but my wife had drawn one earring design we did end up making into something on the laser. I think the feel of both the new iPad and new pencil together is what makes me much more excited to use them now. That, and I’m not exactly an insomniac, but I do tend to enjoy the time I’m laying in bed, so that will occasionally turn into drawing for hours* instead of sleeping

(if I were better the time would probably be cut in half!)

The newer designs definitely look cleaner. I love my Apple Pencil, but I can’t draw to save my life, so… not quite the most useful tool for me.

Thanks for noticing! My best friend just messaged and said he looked the new one the best…as if that weren’t the point

I used what I knew about Photoshop and watched some artists draw to get where I am. The layers panels are seriously a life saver. I can’t tell you how frustrating it is to start changing stuff and then wish I hadn’t changed so much…

Yes, exactly! I immediately thought of you when I mentioned that, because I know you also use cardstock for your designs (which are fantastic, btw).

When I was in school, I kind of had a reputation for being a good writer, and spent a lot of time helping other people with their papers. Someone asked me one time, while I was helping them, how long it took me to write a paper. My response: “As long as I have.” I was always tweaking things right down to the last minute, no matter how early I started. I’m the same way with art. So no, it’s not just you.

Glad your new toy got you where you wanted … Kudos!