No traditional window in my studio - creative solutions needed!

Heyyyyy guys, OK, so I planned to use my Glowforge at my studio (which also doubles as my retail space) BUT I only have a door and a glass garage door - here’s the picture: 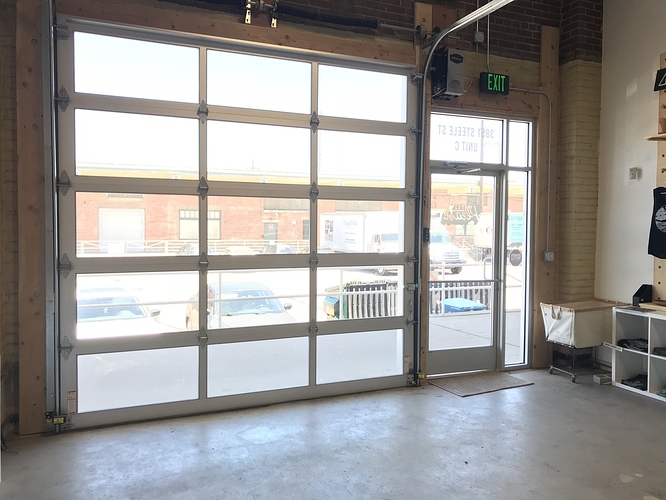 Right now I have the Glowforge at home but I’ve used it maybe 5 times since I got it because it lives in the living room of our studio apartment and I just can’t handle how invasive it is in our small space. And now that I know that the air filter is delayed I need to figure out a temporary solution to get it to my workspace because at home it’s basically a very, very expensive paperweight.

But, hence the dilemma, our workspace has that glass door and glass garage door and that’s it as far as windows go. To make it more complicated, I don’t want to have it permanently at home near the doors because this is the front of our space which is a dedicated retail space.

So I’m thinking maybe putting casters on a a sturdy table and rolling it up to the garage door and inelegantly feeding the hose out to the side of the garage door (if it’s open just enough for the hose). It seems super janky and I feel like there’s GOT to be a better way so I thought I’d ask you clever folks. Appreciate any suggestions, I’m at my wit’s end here!

might be able to make in insert the size of one section of the garage door; I’ve done this in the past to run a/c exhaust. its awkward, but functional. 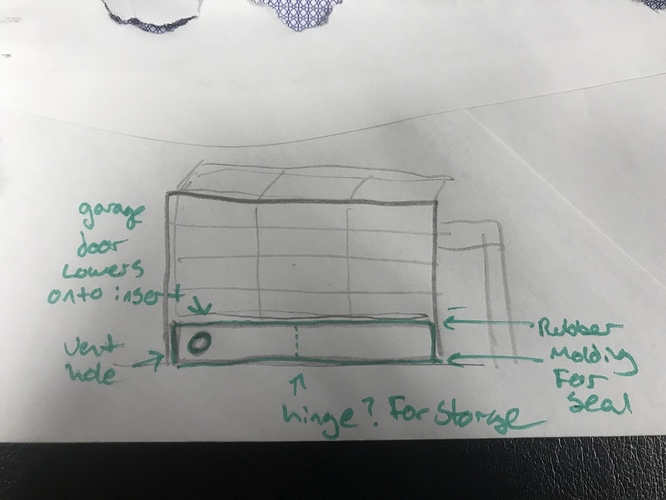 That’s basically what I do with our sliding door (maybe I’m just okay with janky?

). I keep the Glowforge low to the ground, and the hose just gets tossed out the door on the ground (minimizes bends that way). I have a problem with the exhaust coming back in due to wind, so I made something to span the opening with a space for the hose and it blocks most of the blow-back. You may find it easier to do that with your regular door than the garage door.

Honestly, unless you’re showing off the Glowforge during use, I wouldn’t worry about janky if it gives you a workflow that fits your needs.

Yeah, I’m thinking that I might have to do something like this, especially since it’ll get cold before the air filter arrives.

True! I have no problem with janky, I’m mostly just worried about once it gets cold and I can’t have the door open, then I guess I’ll just have to figure out a rig like @jbv suggested. Good call on the wind - I didn’t even think about that and it definitely gets windy around here, I’ll have to figure out something for that!

Oh, also, forgot to say in my last reply - thank you for this! Definitely helps me visualize what I’ll probably have to do if not now then in a few months.

Glass cutter, a magnetic blast gate and some 3m vhb tape. Cut a hole the right size in one window, install the blast gate and have your glowforge on a rolling cart. Roll up and connect when in use.

Yeahhhhhh, that sounds fun but pretty sure our landlord would murder us since he just put the garage door in less than a year ago.

Cost to replace a window isn’t bad. You could talk to him and offer to pay it. In that case I would remove it, install acrylic instead and the. Replace the glass when you move

the one negative there is that you’ll be blowing fumes/smoke out into the retail front. and if there are other retail storefronts there, they may not be particularly happy with you pushing that out in front of their spaces as well. something to keep in mind.

Hm, interesting. I definitely don’t have enough prowess to do that myself but I’ll ask our old contractor how much something like that might cost. Thanks!

Yeahhhhhhh, I’ll probably be only able to use it at night when everyone else is closed no matter what I do. Luckily the whole place is pretty deserted at night. I’m just not sure there’s another option - getting a vent out through the roof seems way too expensive for a temporary solution (and with our high ceilings it might not even work?) Keeping my fingers crossed that air filter ships sooner rather than later!

Cut a dryer vent hole in the wall and be done with it?

I wouldn’t vent out the front… I know you said you’d only use it at night… but that limits you dramatically, much like having it at home. There’s no way to do a dryer vent hole out the back of the building somewhere? Or even go to the roof (with a blower assist). If you’re a good (long term?) tenant, and you pay for the install, most landlords will accommodate such a thing.

Given the amount of light gap under the main front door I’d be worried anything you do would leak plenty of air back in. Given that I’d probably try a heavy tarp hanging off the bottom of the garage style door and then make sure the glowforge exhaust hose stretches a good foot or more out side onto the sidewalk if that only gets you minimal smells on the street and does ok indoors I’d think it worth trying till the filter arrives. If not a strong booster fan might blow enough away to dissipate.

Would cancelling the filter give you enough money to have a vent installed in the roof?

Otherwise, replacing one of the garage door panels seems the best option.

If I read correctly, that is also a retail storefront? other than putting a hole through wall or roof (can you tap into the bathroom vent?) that garage door is about the only option. Which leaves two possibilities. I have a sliding window that the exhaust goes out of and I made a nylon canvas that fits the space and used the Glowforge to make a 4" hole in it. Something like that could be run at night and put away when not in use.

However… What if the front of the garage door had a long planter! it could have wheels on the bottom to roll out of the way when needed as a door and a large hidden chamber that would absorb any smokes or smells and planted with real or fake greenery it would make a very presentable storefront.

I would love that BUT our space is surrounded by neighbors. Here’s a quick drawing. 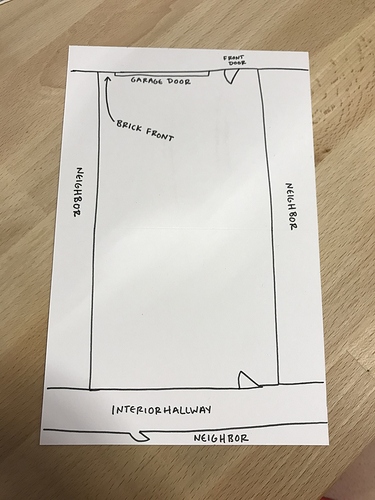 The only wall space we have that isn’t with a neighbor or common area (like the hallway) is brick and in the front of the studio (which is the retail space) and I definitely don’t want the laser to live in the retail space and also don’t really want to cut into the beautiful brick. Also, the building is on the historic register I believe so I worry about doing anything to the exterior. Basically the perfect storm of conditions that mean I still think the air filter is my best permanent bet.

Which neighbors don’t you get along with?

Sadly our unit doesn’t go all the way to the back of the building (all of my problems would be solved if that was the case!) Here’s a quick drawing. 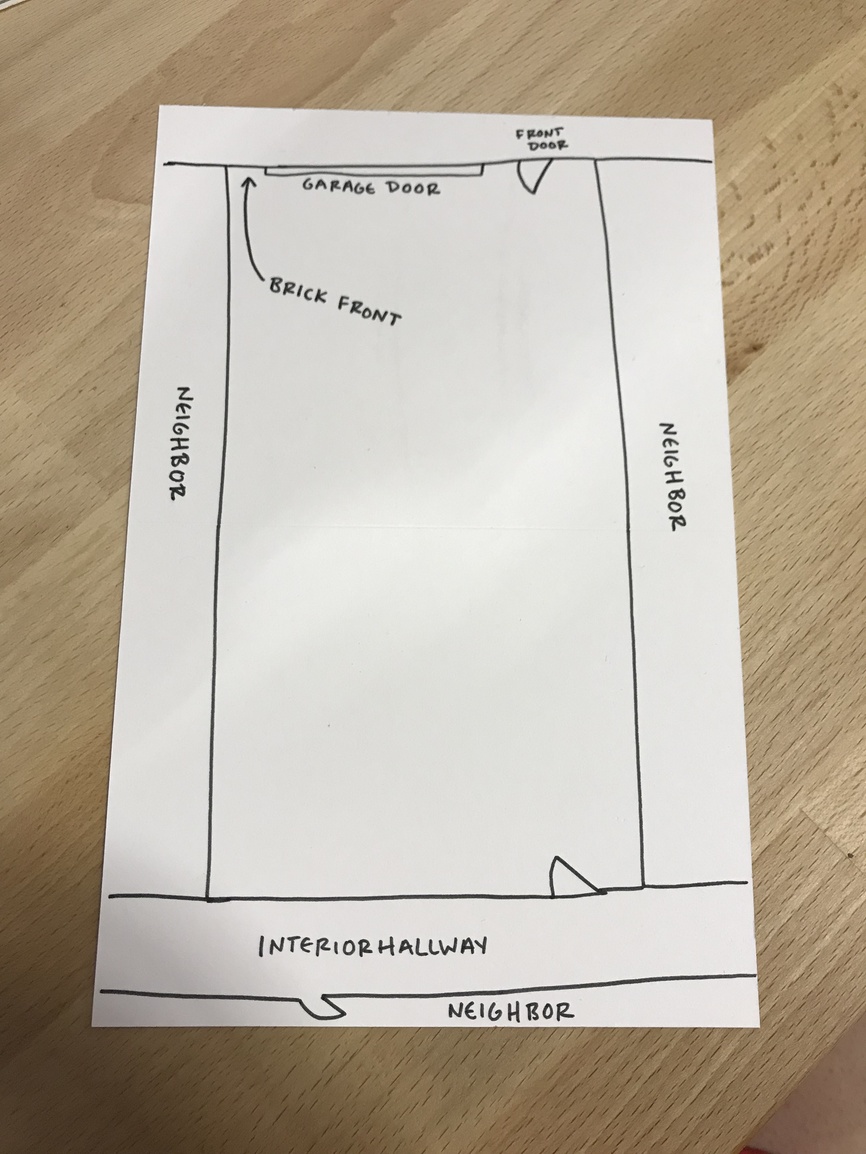 The only thing I worry about with the roof is that our ceilings are high (like a good 20-30 feet) and I thought I read somewhere that there was a limit on using a blower assist to go that vertical. Maybe I’m wrong? Even so, I worry about the cost of finding a blower that powerful. Again, maybe I’m thinking this would be more expensive than it actually would be, I could definitely ask about it if I can figure out the blower situation.