No traditional window in my studio - creative solutions needed!

Not sure how expensive the roof solution would be (and if it would feasible considering that our roofs are a good 20-30 feet high) but I should probably look into it!

We have a ton of those square ikea shelves that we nail gunned wood to the front of, I could probably use that idea and put a vent in the wood covering - that way they could stay in the front of the garage door and we could use them as display and I could just move them under the door when necessary. Not 100% smell proof but would be super consistent with the rest of the shop. I’m not explaining very well but attached a picture of one that we already have made that acts as our register of sorts. 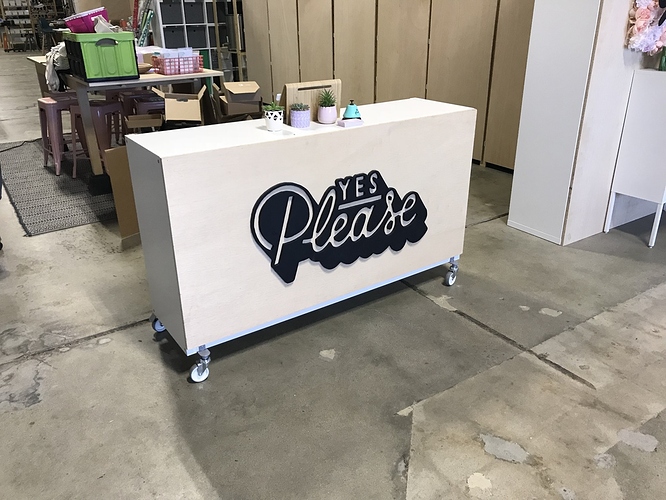 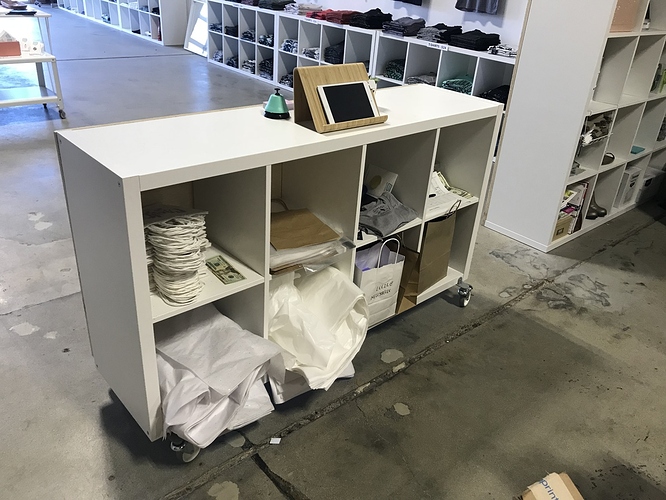 on a side note, that’s a great use turning the shelving unit into a portable counter like that. looks great.

Thanks! We learned reallllll quick that in order to open a retail shop on a budget we had to come up with all sorts of IKEA hacks.

So if venting isn’t really an option (I say if you don’t use the hallway, lock the backdoor and vent there), a vent in the garage door is unappealing and the air filter is October (best case) how about the get creative solution? Place the glowforge on a rolling IKEA hack, wheel it to the front, lift the door, figure out a way to stick the exhaust hose to the side of the wall so the smoke and smell mostly drift up and away and incorporate the glowforge into your business? Looking at your website it I didn’t see a ton of room for personalized items (at least at first glance), but you’re obviously creative. When the glowforge isn’t being used to entertain/personalize things for customers you could use it for what you bought it for. This way the backroom isn’t in the front clashing with the retail.

One idea I had would be stocking canvas tennis shoes and then using the laser (assuming it’s not too time consuming) to engrave/bleach a saying into them. Or screw customizing stuff for customers, make some rolling partitions/walls to mark off an area around the glowforge and let the customers gape at someone creating art (or whatever) like they do at people making fudge in a candy store. It’s a bonus if anyone orders a glowforge using your referral code.

Oh yeah, I learned long ago that I hate doing custom work (so thank goodness there are so many other people willing to do it instead of me haha!)

True, I could definitely do some kind of temporary exhaust out on the front wall, I’ll have to think more on that!

I could also see the appeal of having other people see me do glowforge stuff (though my inner introvert is freaked out by that) but I think most of the work I want to do is making minimal and modern home accessories so it’s completely separate from my current business, hence why I’d do most of my laser work at night anyway. Though I’m definitely gonna try the canvas shoe idea for fun!

@kiwischloffel Is the top right window separate from the panel below it ?
If so, with the addition of a small fan, that might give you the smallest mod to get the exhaust out of the front wall.

No kidding, this one is really cool: Pulling out the Besta units a bit, meant that Ekby Alex drawer units could be mounted vertically. The drawer interiors are modified into tool cabinets.

Yeahhhhhhh, I’ll probably be only able to use it at night when everyone else is closed no matter what I do. Luckily the whole place is pretty deserted at night. I’m just not sure there’s another option - getting a vent out through the roof seems way too expensive for a temporary solution (and with our high ceilings it might not even work?) Keeping my fingers crossed that air filter ships sooner rather than later!

Just remember it’s not a giant plume of smoke like out a smokestack. It’s more like someone smoking out front (which can be annoying too). It’s more smell than smoke and if you’re cutting acrylic much nastier smell then most folks like. Can you not go through an outside wall like the back? Sure you might have to pay someone to cut the hole, depending on what the building is made of (such as concrete or brick) but really not a big deal to install a dryer vent through a wall. I would hazard multiple businesses near you might have a dryer which is the same install, and far more damaging to a building since wet vapor comes out (this is pretty clean dry smoke and didn’t even stain my deck in a year of cutting where my GF vents out over - and it’s only 2" above the deck surface)

The problem is that we have a shared hallway in the back of our unit and our only exterior wall is up in the front of the shop and I already know that the laser can’t live there because the retail space. Another option is the roof but considering the fact that I have no idea how long I’ll be in this space I don’t think that I want to spend the $$$ to get the roof done because as of now the laser isn’t going to be an instant moneymaker because I won’t be doing anything custom. So even though it sucks I think I’m stuck waiting for the air filter and having a temporary solution until then!

Above the ceiling are there any roof ventilators that you might be able to splice into? Or do you have a bathroom? Most areas require a vent/fan?

Be careful tying into existing mechanical infrastructure. There are specific codes those are following, and you don’t want to run afoul of the man ™.

There is always this solution:: It has 10" intake and a 6" exhaust and will move more than twice as much air while at the same time filtering both smoke and smell so it could exhaust into the shared hallway or even into the shop.

I have not come up with a good way to go from the ten-inch intake to the 4" hose but it has cleared the house of smoke and even cooking odors on several occasions. the Glowforge operates at 200-CFM but the machine operates at 500 - CFM so in theory, you could just lay the exhaust nearby and get a good result