Nothing that hasn't been done before

But it’s my nothing this time! Just playing around, getting to learn the tricks and limitations. For example, this pencil blew away the first time because I forgot about the air assist and didn’t use a magnet. Then I played around with the settings a bit to get something that cut through the paint but didn’t char the wood so much to make it black-on-black. And then since I saw a cork trivet in the kitchen, I quickly grabbed a free teapot SVG from the Internet and engraved it. That part was super easy and I can’t wait to make some customized coasters as gifts. 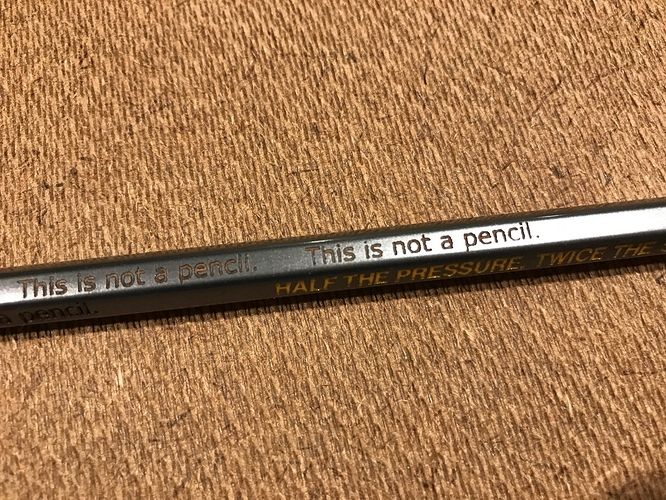 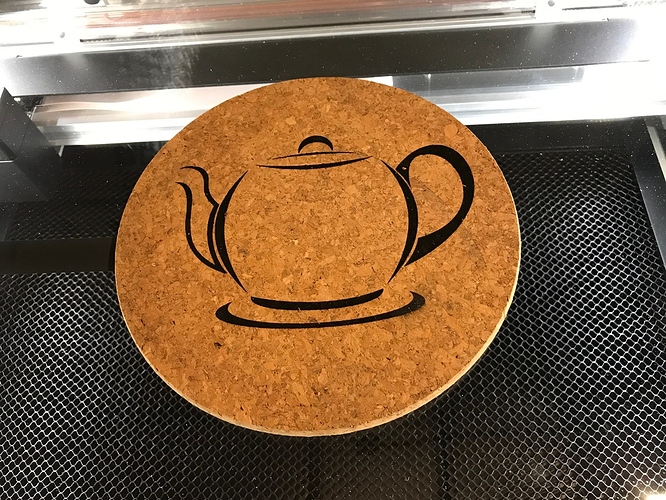 I’m about to do pencils for the kids this weekend. I’m curious how you aligned the letters on them? Is your unit that accurate? Or did you do a test run and line it up to that? Or…?

It’s that accurate. If you have the patience, you can see the whole story on my YouTube channel.

Yeah… I figured you’d say that. And I’m very happy for you and the others who aren’t having the alignment issues that I do.

I just did a bunch of "I was stolen from Mrs Hatch’s desk! " pencils for my wife. School started today and she said some of the other folks were already thinking up projects for me

I used @marmak3261’s pencil jig but altered it to fit an Amazon Basic yellow pencil and 3/16" foam core instead of cardboard.

Doing a pile of them for the local MakerFaire.

I like your coaster. I may steal the inspiration

Customized pencils for the kids’ first day of school will have to become a tradition when the forge finally arrives. Wish I had it for last Wednesday when our oldest had her first day of kindergarten. Bravo.

Sorry… didn’t mean to add fuel to your fire. I haven’t done enough to understand the parameters. It worked well for a single pencil directly under the camera, on one evening. And after I shimmed up the corner and got the lid straight and the machine almost perfectly level. I can’t say if any of those are variables or if I just lucked into one that was calibrated on a Monday.

Sorry… didn’t mean to add fuel to your fire.

Heh. Of course it’s not you! Honestly I’m really really happy yours is working the way it’s supposed to! Driving me a little insane that mine’s not. I know the pleasure of having proper accuracy from my 1st unit and anything less makes me… I’m going to stop talking now.

So which direction is the phrase on the pencils? Once they get sharpened enough, are they eventually going to say “I was stolen” or “Mrs Hatch’s desk!”

I don’t know who you people are who have managed to hold on to a pencil long enough to lose a significant portion of it to sharpening.

woodworking tends to chew up pencils in no time. When you are marking on unsanded wood all the time, it’s like writing on sandpaper. I’ll go through an entire box of #2 pencils in about 2 months of lots of woodworking.

Also, you have to keep them sharp so you can be more accurate in your marks, so even if the tip is “good enough” for paper work, it might still be sharpened for more accuracy on the wood itself. So yeah, LOTS of waste on pencils

Ah, woodworking. I have to admit, I probably haven’t used a pencil in anger since grade school. And I was that kid who was forever losing things.

Now, several many decades later, I have become quite adept at not losing things, but I also have no use for writing instruments, so I’ve still never managed to use up a pencil or go through all the ink in a pen.

hahaha I was the “scavenger” of pens and pencils in school. If you dropped a pen or pencil, and I came across it, it was mine. I always ended up with more (and sometimes MUCH Better) pens and pencils than I started the year with. I never needed to purchase new pens and pencils cause I had a good fistful at any given time. The mostly used up pencils were great for a number of things, but my favorite was pulling the eraser off, whittling a little notch, and using them as projectiles.

We were NOT safety conscious in school. Pencils, paperclips, bent metal were all valid projectiles. The only thing that was banned was a rolled up paperback workbook that was duct taped at the end and fired using surgical tubing. In the initial tests, it flew across the gym, hit the upper wall and at the point of impact it was STILL rising. We all looked at it and determined for ourselves that it was not permissible for us to fire it at another human. Figured it would take a head clean off if you hit someone squarely.

I am the same way. I don’t use them quite as fast as you do with my woodworking, but they do need sharpening often.

Is that an Ikea trivet? I picked up 3 of them last Friday when I was there buying my GF table.
Don’t have any plan for them but figured they’re cheep and laserable, how could I pass them up.