Off the wall topic

In an email ‘conversation’ with my niece about family ancestors, etc. the mention of this family artifact came up…a bullet mold. There are so many varied pools of knowledge on here, I couldn’t resist asking if anyone might know what caliber ‘bullet’ this would have produced. The tool itself is only 5" long. I measured as best I could with my calipers, the inside of the mold and it’s approx. 8.83mm.

Any input on our family puzzle will be appreciated. 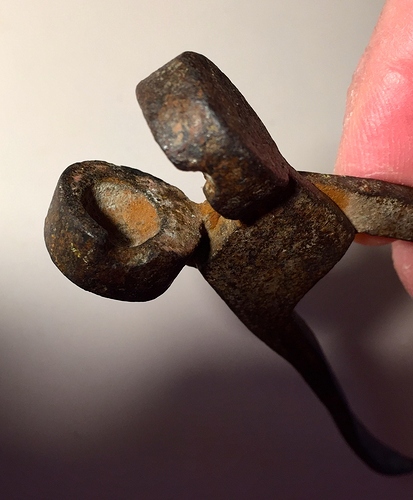 I’m no expert, but it looks like it was made for ball ammo; 8.83mm would be about .34 caliber. Round ball came in about every size/caliber you could think of (within reason); lots of oddball stuff existed.

Probably whatever caliber this one is 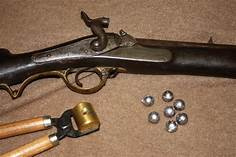 typical sizes varied. Examine anything you can find on flintlocks and you will probably come up with something that mirrors your tool.

Thanks to both of you! My nephew is also sleuthing. Originally, just by looks, it was surmised to be a .50caliber and mostly likely have been used in a muzzle loading rifle…but the new measurement has disproved that. I look forward to any more input and I will report back as well.

@brokendrum, that looks to be a .50. Sweet old weapon. Percussion cap so sometime after 1833. Any markings on that thing?

Originally, just by looks, it was surmised to be a .50caliber and mostly likely have been used in a muzzle loading rifle…but the new measurement has disproved that.

Those old firearms were often handmade in whatever size the local gun maker would make them. It was pretty arbitrary early on. The bullet mold was then made to fit the barrel that had been bored out. They were often a package (although there were gun makers who would make odd sized firearms and then kept the bullet mold for themselves which forced the buyer to come back to them for ammunition). They didn’t usually last because word would get out and the gun maker who provided the molds with their firearms would get the business instead.

Oh, there’s a theory that this odd sizing of firearms and ammunition was done to mark the maker & to prevent theft since if you didn’t have both pieces (firearm & mold) you weren’t going to be able to use the firearm. That was likely apocryphal though as any decent blacksmith or gun maker could make another bullet mold to match.

Saw what you did there !

As each weapon was handmade start to finish I would have thought there would be a lot of natural variabilities, But back when Muslim fanatics were our friends (and the Russians were in Afghanistan)I saw a documentary of them hand making AK 47 s with nothing more than a pair of calipers for accuracy.

I thought I was being sly

? People filled with excessive and single-minded zeal for a lightweight cotton cloth in a plain weave?

Kidding…I know it was a typo.

The really bad ones are devotees of Satin

The really bad ones are devotees of Satin

Though in the Old South the Muslin Brotherhood was pretty scary as well.