Once More into the Fray

Made on a Glowforge
proofgrade, plywood, organization, jules, gfugc-homeimprove
Jules September 18, 2017, 4:49am #1

AAA Battery Box. Kinda/sorta goes with the AA Battery Box shown before somewhere. Definitely seems to be turning into a cityscape of some kind. 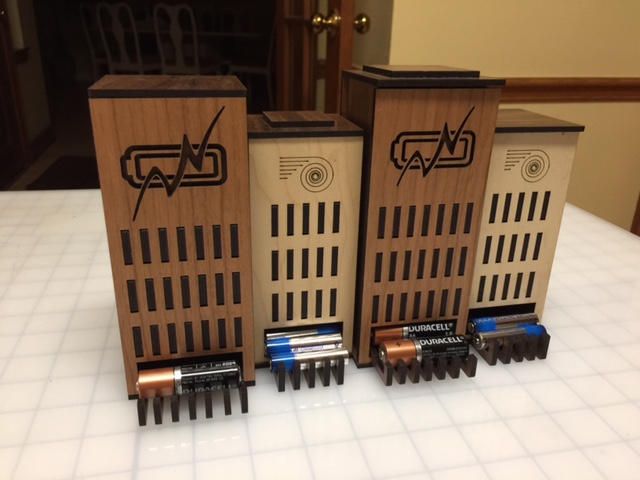 Just need the villain Drain and the hero Spark to fight in your city.

Resistance is futile. At least it’s not just a Flash in the pan.

Sooooo not up on my superheroes. How about River?

River is made of chocolate!!

I soooooo love these battery boxes, and can’t wait for them to hit the design store! Your designs are so well thought out.

Awesome! But as I’ve mentioned before: I’m an idea thief (a candidly honest one, appairently). And your idea has just been stolen.

@Jules, I’m a bit confused, how did you cut the shallow mortise & tenon? I haven’t tried that on the GF yet, and my inexperience with lasers is obvious. Is an engrave in PG repeatable enough with the laser to cut consistent depths?

Yes, it absolutely is! At least on the Proofgrade ply - it’s very repeatable.

I’ve been using it lot in my designs lately - I like a little bit of a trough to run the glue in and keep things aligned while it sets up.

Great design, I especially like the ‘fingers’ that retain the batteries!
I need to do one for the hot melt glue sticks.

There’s a hot melt caddy in the free designs section that includes a space for the glue gun.

Yeah, I made one of those up too. Works great for keeping things corralled.

I’m going to have to look at that to see if it would work well for holding embossing stuff.

These particular designs might not work for anything other than the specific battery size. The batteries go on a little roller coaster ride inside. The tight fit is needed to keep them from hanging up and getting stuck. (Which is the worst part of trying to design one of these things - i hate battery dispensers that let the batteries continually get stuck halfway down.)

The next one in the series might be adaptable though. That’s it for the roller coaster models.

I was thinking the hot melt caddy. So much to think about.

Chuckle! Whoops! My mistake! Yeah, that one would adapt a lot better.

I still want the battery bit, and I do like the rollercoaster designs.