Pro just arrived, so I pulled out one of the designs I had been planning and got down to business.

I belong to a local Buddhist temple, and I’ve been making onenju (mostly stretch bracelets styled after the full-sized kind used in services, though I’ve started making those too) for the last year or so. We needed a stand so we can sell them in our bookstore, so I opened up Adobe Illustrator and laid out what I want. This is some of the medium plywood that came in the starter set.

Main mistake I made was related to center of gravity. Put the first few onenju on aaaaaaaand over it went.

So I went back on the same plywood and cut a 5" baseplate to replace the 3" one I’d designed, and voila! I’m thinking of some smarter joinery work to make this stand upright and withstand some jostling, but hey, not bad for 2 hours out of the box, right? 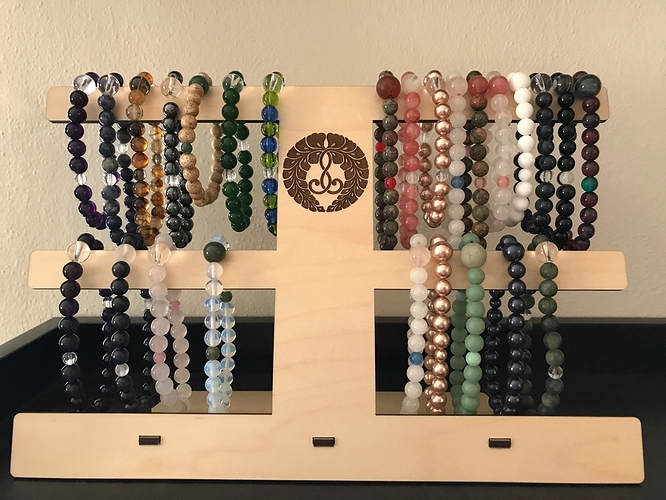 Awesome second project (I’m assuming you made the ruler)!

You just never know where I’ll get my inspiration! This gives me a idea for something I’m working on. Thanks

Oh how lovely and unique!

Looks great! Congratulations on receiving your Pro too!

Nicely done! You will smile every time you see the display!

Looks lovely! Would making a vertical bracket behind the front beam along the middle tongue help prevent the facade from flopping over?

Most likely! Obviously I’m not a structural engineer.

I have some ideas for how to shore it up, since customers are going to be (unintentionally) rougher with it than I am. Fortunately, I have all this cardboard lying around…

Beautiful - both the oneju and their stand. Not bad for 2 hours out of the box!