At Makerfaire they were cutting out drawings. I asked if they could do two at once and they seemed pretty adamant that it could not be done. So we watched them cut my girlfriends first, then they went back and cut mine.

I’m not sure if this answers your question, but I think it’s what you were asking.

This is a technical question about the actual ability of the machine. Would appreciate a response from GF on this.

You have to drag and drop the design on to the material in the UI for placement. It does not put it on there for you.

Dragging and dropping for precision engraving would not be very precise. So there’s object recognition for things like an iphone or macbook. The GF already has the ability to do that for a single object. The hardware can apparently already handle it. It’s a brilliant feature.

What we want to achieve is:
a. Multiple ‘object preset’ jobs;
b. ‘Custom object presets’.

I agree, that would be awesome. It might be something they do in the future. Unfortunately there are a lot of things it cant do right now because the software isnt finished. Were still waiting to see the greyscale engraving, 3d engraving, and a list of other things that havent been completed yet.

Until then, and even if it is a feature, I have a feeling you will get a much more accurate engrave on something if you make a jig for those pieces to fit in, and then make a file to cut over the top of that jig with all the pieces laid out in it. 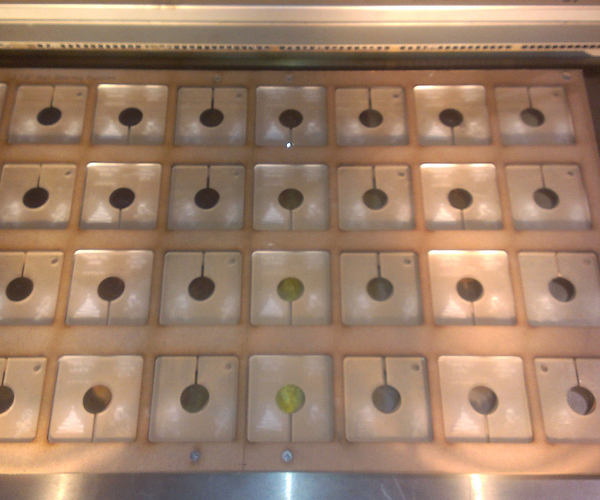 So there’s object recognition for things like an iphone or macbook.

Sorry for the bad news but it’s a no on the object recognition. There were I believe other posts about templates you could use for specific objects, but the glowforge at least at initial shipping won’t be recognizing a random device just dropped in.

One of the few times it’s come up:

Unfortunately, there’s a reason that comment was only in the “back in time” segment and not in our crowdfunding campaign or anywhere else. We worked on the feature and could not get it to work well. We ultimately scrapped the plan and went with the direction we’ll be shipping: precalibrated materials with embedded barcodes for “it just works”, and the ability to test and save material profiles for your own favorite materials.

Sorry for the bad news but it’s a no on the object recognition.

Really? So the GF cannot recognize the macbook or iphone anymore? That would be a real shame. It’s still on the website as a feature and of course in the promo video.

Does that mean feature 8. OPTICAL ALIGNMENT is no more? At all? I am confused…

I don’t think that’s referring to the same thing. I think the post you linked is referring to material recognition, and it makes sense that only the Proofgrade stuff would fall into that category due to the barcodes.

I think the OP is talking about auto-device recognition, like where the video shows engraving on a macbook. The question (I think) is whether an engrave on a device (say an iPhone) can be duplicated to a second device automatically, regardless of device orientation in the bed. And then, will this have to be done on subsequent prints? or can it be done on multiple devices on one print?

Based on the video, copying an engrave and pasting it onto the material is a manual function. Multiple copies of the engrave can be done at least on a single sheet of material (based on the promo video anyway - red and white invitations). As for doing this on a device… Even if the functionality was there, I would probably make a jig so that my device was in the same position every time, and I don’t think I would trust it for multiple devices at the same time.

I think that they could probably do multiple designs at once, but not multiple sheets of material. The Maker Faire demos were on small pieces of wood. If they had a bigger piece, then I don’t know why they wouldn’t be able to cut multiple designs at the same time. It’s just a matter of importing those steps and laying them out… which is all done manually.

Is that really true? It’s still in the primary sales literature…

it’s going to set the focus at the correct height and power settings for engraving on those objects, it’s not necessarily going to align a pattern on it. We are still going to be responsible for aligning that optically.

Feature 8 promises more than that…

8. Optical Alignment
The dual cameras align the laser head with the frame, with your design,and with your material. Glowforge realigns with every cut and engrave, adjusting timing and position, so every print comes out perfectly.

it’s part of the promo video

True. I wasn’t implying that it would align according to an object. Just recognize it visually. I was specifically responding to

it’s a no on the object recognition.

Inside of a single print…yes. If you have a file that has both vector cut lines and engravings in the same file, some deep, some shallow, the software will calculate the relationships between the various parts of the design and reproduce them exactly. But the overall placement of that design on the material is still going to be our responsibility.

If you’re planning to buy a bunch of pre-cut wooden doodads for instance, and just engrave them, you will need to create a jig to hold them in place, because otherwise, they might shift, or not be placed square, and you might get engraving that wasn’t centered. The engraving would have to be positioned on the doodad by looking at how it turns out on the camera, and dragging it around manually. (Not sure if rotating the design is an option.)

If you wanted to cut them out and engrave them from a bigger piece of material though, you can rotate the design any way that makes it fit, and the machine will do what you want. But the initial file would contain both the cutting and engraving information at the beginning.

(Probably doing a terrible job of explaining that, but that’s how I understand it will work.)

I think the issue is that you are reading between the lines of the promo language. Yes the camera aligns the head with everything. It allows the GF to know where the head is precisely, So when you manually move your design over an image of the material things are aligned perfectly, with the frame, design and material. In essence it’s a positioning sensor. The GF also understands the z axis depth automatically. So technically the language is accurate. But it does not and never was advertised to understand the shape of random material so that the design can be automatically placed. And nothing has been advertised about multiple instances of a design other than manual control. That’s not saying that the capability isn’t possible with the existing H/W. Just that it’s not advertised as something we will get. It might be in the hopper.

For a potential use case, consider the following.

User X wants to make a snowflake for their classroom. They have a segment of a snowflake (1/6th of the design) that they created, but the snowflake is going to be a wooden one, with 6 removable pieces (one for each “arm” of the snowflake).

Ideally, the image/design/drawing would be duplicated on each segment.

Not the best use case, but it was what came to mind first.

Correct me if I’m wrong, but this is my current understanding of how the Glowforge alignment works.

From my understanding, it can recognize macbooks & iphones as a material for settings, but not for alignment purposes.

It would be awesome for auto-aligment to be added as a future feature. Hopper?

(Oh cool…it’s a new word for a Registration Mark. I love collecting words!)

Inside of a single print.

@Duality it is what @Jules said. Glowforge does exactly what they say in the specs. Unfortunately language can sometimes be interpreted exactly the way we want, not how it is meant. Specs do change and this forum has made many suggestions that GF engineers have considered or planned. -Rich

Pretty much. I think its a term used a lot with vision systems. We use them for circuit boards to align surface mount components.

They can be a simple as a dot. Or much more complex depending on the imaging system and application. A fiducial marker or fiducial is an object placed in the field of view of an imaging system which appears in the image produced, for use as a point of reference or a measure. It may be either something placed into or on the imaging subject, or a mark or set of marks in the reticle of an optical instrument. In high-resolution optical microscopy, fiducials can be used to actively stabilize the field of view. Stabilization to better than 0.1 nm is achievable.