I spent the whole weekend making all of this. My friend is having a little Christmas craft fair this evening that I only found out about 2 days ago. She asked if I could make some stuff for her booth. The Soul Runner one is a running group that she runs (over 1000 members!) 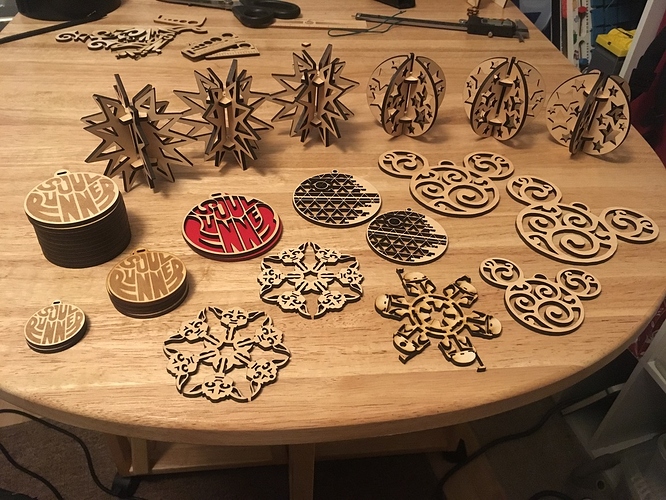 They’re great! And with such short notice too. Nice job!

Wow you have been busy! It’s one thing to run off a bunch of items like that on the laser, but the real work is in pulling the designs together and getting them all setup!

Really like your take on the famous rodent heads.

Wow, that’s great. So cool to be able to respond so quickly to a request!

Wow! Did you sleep?

Those death stars are sweet!!

those look great. how many hours of cutting is that?

Grand total of about 4 hours. Thanks!

I did all of this in about 8 hours time. Plenty of time to sleep!

Thanks! The dirty side of laser cutting is the weeding.

Weeding is far better than trying to scrub the smoke residue off of the cut / engraved pieces.

These are really nice.

I found out that depends on the number of units. The first 2 hundred tokens I did out of 1000 took hours to weed, where soaking them in alcohol for a few minutes allowed me to wipe the residue right off.
For a few pieces masking would be quicker.

Nothing like a little time pressure to test (and grow!) your design abilities. Your friend must have stolen the show with these ornaments