Over the River and Through the Woods Ornament

First off, I want to say thank you to @geek2nurse for the nativity ornament file the other day. I took that and modified it with some new pieces to make this Grandma’s House Ornament. I made the holes a bit more snug so no glue was necessary, though I did break the fragile little deer twice. Good things he’s a small piece! I love this base and can see so many other possibilities for pieces to pop into it!!! 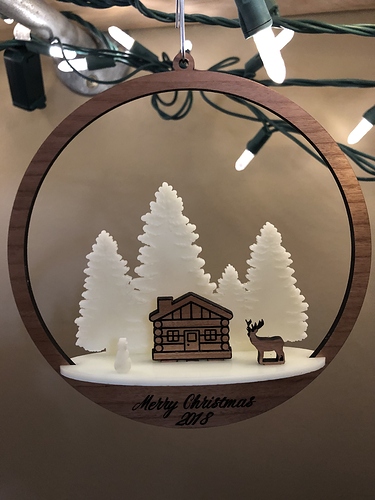 Ooh, I love this!

Cool! I love the rework as well as the original.

Nice modification. I love how this community works together - sharing experience and talent.

So awesome! The acrylic for snow really makes this piece! Well done!

The ornament is LOVELY, but your header cracked me up. I thought maybe it was a birthday gift for an aging friend who was born on Christmas (Grandma’s house is over the river)! Thanks for the inspiration and the chuckle!

Thank you, I can’t believe I missed that!!! I really meant over the river, I promise!

Oh, I know! And I wouldn’t have said anything, but it gave me such a good laugh.

Even if not intended, I’m glad it gave you a good chuckle

The house is a drawing of the house the kids all grew up in. We’ll be retiring one of these days and moving to NC and the old homestead will be sold. So I made one for each kid this year (they’ll have to assemble it

) so years from now they’ll have something from their childhood. The snowman is from our blow-up Christmas decoration days (used to have a yard full of 15’ tall inflatables) and the bear is represents our chainsaw carved bear who has stood guard at the end of the driveway for most of their lives. (His name is Randolph.)

Thanks to @geek2nurse for the original design and @josephtpage for his take on it that led me to ours. 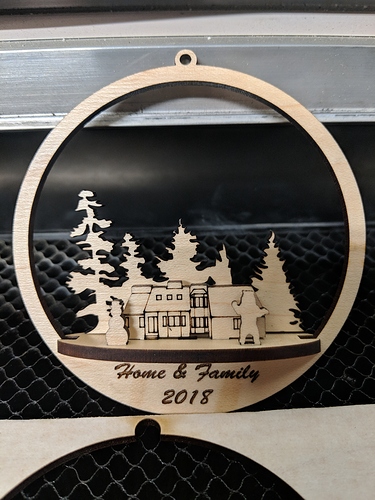 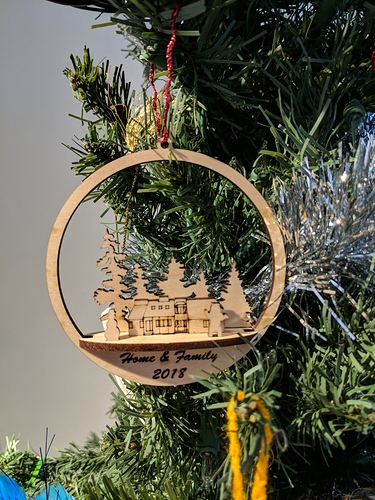 Amazing job @jamesdhatch After this I did something similar and made a design based on my childhood home where my mom still lives. 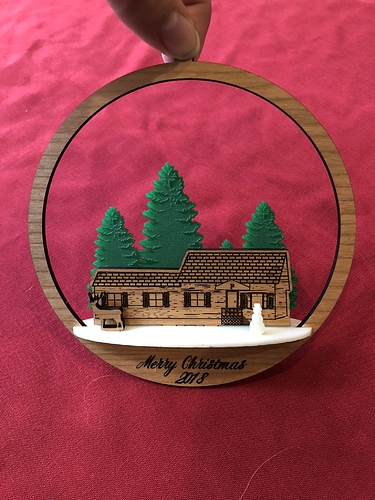 Then went ahead and made a teacher gift 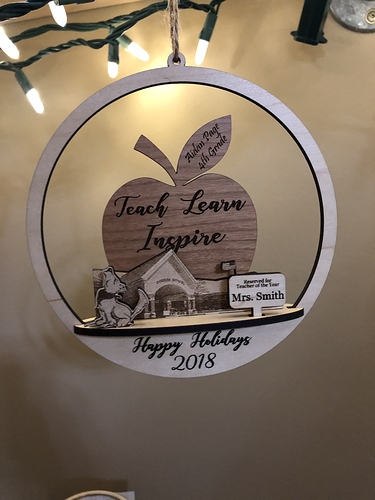 And finally, my cousin recently bought property near where I grew up in Northern Wisconsin and so I made them this. 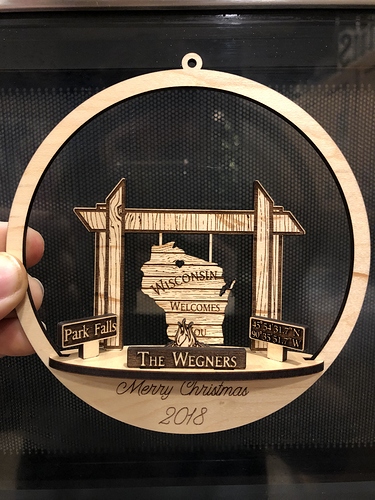 After this I did something similar and made a design based on my childhood home where my mom still lives.

I was going to use white acrylic for the base & snowman and green for the pine trees behind the house but my wife objected - she said simpler was better. I’ll probably go ahead and do one anyway so I can have it on my project shelf.

Yours look great! My wife & I were out driving through the town my mother grew up in and my grandparents lived until they died - the house was gone

I remember it (we spent every Christmas and lots of holidays there) but don’t have a picture of it. Kind of bummed.

How did you get the deer to work? The legs on mine were just too thin no matter how much I fattened them up until they were just too pudgy. They kept breaking trying to put them into the slot.

I use a needle nose pliers to push down on the base rather than the deer itself.

I was doing that but couldn’t get the proportions of the legs and antlers right - too complex a design I think for something less than a half-inch tall. I used a pick to push against the base rather than a pair of pliers though. In the end Randolph won out

Yeah I definitely ran into those issues as well, the antlers on mine are barely hanging on. A light breeze and they may just fly away! And believe me, I broke several deer while getting them set but I can be quite stubborn! I liked the pliers because I was able to manage the force in small squeezing increments which I think helped. Either way you did beautiful work!