can i split an image in paint shop pro and use it with my glowforge?

Don’t see why not.

Paint shop pro is just a raster editor like any other.

If you want to make it a little more automated, you might like pine tools. They have an image splitter that works nicely.

how long does it take to split an image on pinetools? i have been trying for an hour

What exactly are you doing in PSP? Splitting in image should involve copying it, then cutting half the canvas size off - then doing it again but cutting off the other side of the canvas - it should be more than a couple minutes work.

i have not tryed it in paint shot yet, was trying it on pinetools, but cant get it to work

have u used the pinetools to split an image

Yes go back and read what I posted. I provided pictures and everything.

Maybe this will help (this is the Pinetools screen) 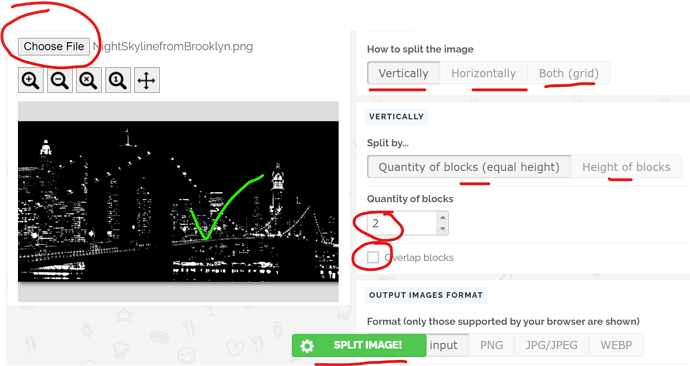 can you split an pdf and svg with this?

It’ll accept an SVG as input, but it can’t output a SVG.
So it’ll render it as a PNG and split that.

This could be useful for an engraving.

Give us some more details of what you’re trying to do, and I’m sure folks here can help you learn how to do it.

“An image” is sadly not giving us enough information. You originally asked about Paint Shop Pro - which is a raster editing program. PSP, or Pinetools can easily cut images in half. .jpg, .png, .tif - those are all raster file formats.

You then asked about PDF and SVG - those are called “container” formats - they can hold either rasters or vectors.

Most raster programs will not open .svgs, but can open the raster portion of .pdfs - so you can see why we’re having a hard time answering your question.

If all you want to do is engrave an image, then your best bet is to make it a raster and cut it in half in what should be a few minutes work. Most vector programs have some sort of Export As/Save As bitmap function. In the case of Pinetools it’ll do it automatically when you upload your .svg.

If you’re trying to cut out a shape then you need to stick with the vector format - it’s still doable, but more complicated and no, PSP or Pinetools won’t do it. Illustrator will, as will any vector editing program. There are instructions for that here:

Need help dividing map into four panels Beyond the Manual

I’d use the Shapebuilder tool in Illustrator for that. One thing you have to do is make sure that the paths for the map are cleaned up… no stray points, no overlapping shapes (that one has several), strokes only on the paths and no fill color, and for this application, to save yourself a few steps, you need to make make sure there is a tiny gap where the interior lines almost meet the outline paths. [map-split1] Sounds harder than it is… Give everything a stroke color and no fill. (CTRL+A…

I’ll be “that guy” to come out and say aligning a split raster image to the edges of material so they line up when joined is simply impractical.