Painting Engraved Acrylic: to lacquer or not to lacquer?

I just wanted to share the results of some tests I did recently. I engraved some “No Trespassing” signs out of black acrylic and wanted to paint the engraved portion white.

I had heard varying reports about first using lacquer before painting so I thought I’d do one of each and share. If you use lacquer, you have to wait a day in between the lacquer and paint for the lacquer to dry.

The lacquer did help smooth out the finish on the paint, making it the superior performer. However, the difference was not very noticeable.

Ultimately, I think the lacquer first technique is only worth it for big or high-end pieces. I’ve included some pictures for comparison. 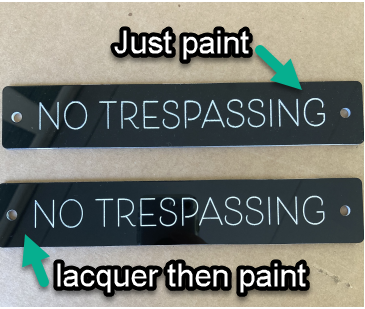 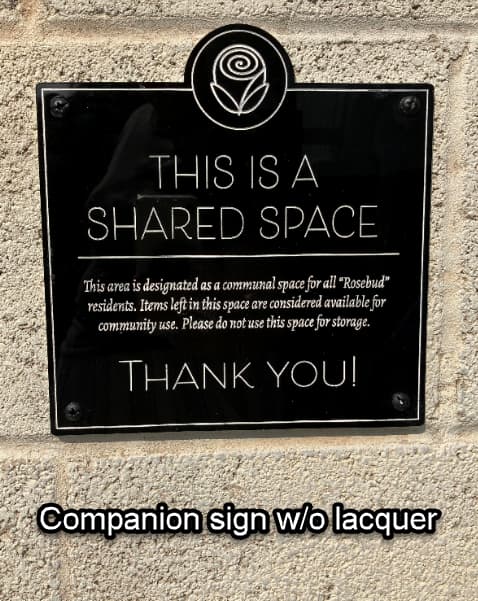 *For clear pieces, I think the “paint the back” technique gives the best results but this is very useful for colored acrylic.

Thanks for sharing your experience.

Observations - not criticism! I’ve never heard of putting lacquer down first, but flood-filling engraved acrylic is something I do often. It can take many coats to get a smooth result, if that’s needed. I would expect it to have a similar result - the first coat(s) cover up the pattern generated by the engrave process, then it all starts to smooth over. Sounds pretty much like the same process.

For white lettering/details, I use Kilz from a can, and slap it on thick and put it out in the sun for a few hours. It’s be best I’ve found for bonding to both acrylic and wood - it’s a primer, after all. I even do that for acrylic colors, but put down Kilz as a heavy base coat first - then lightly brush on the “craft” acrylics I have when that is dry.

Honestly can’t see any difference between the two samples in your first pic. Can you take a close-up pic showing the difference?

Thank you for the insight!

In this case, I was going for full and even coverage, not necessarily smooth-to-the-touch, but I think the principle is probably the same. Though the video I watched originally (How To Paint Engraved Acrylic - YouTube) suggested you need lacquer to stop paint bleed, I didn’t find that to be the case. If anything, It served the purpose you described of covering the pattern from the engraving so you have a more even surface to paint on.

I’ve included a close-up shot (please excuse the dust ). The unlacquered lettering has more bubbles/ black spots after the first coat in comparison to the lacquered version. But, as you said, it doesn’t make an impact from a distance or after multiple coats. There were definitely not issues with paint bleed on either one though the edges of the lacquered version are a bit neater.

I used the Rustoleum 2x Paint and Primer in white with Rustoleum Lacquer in satin. 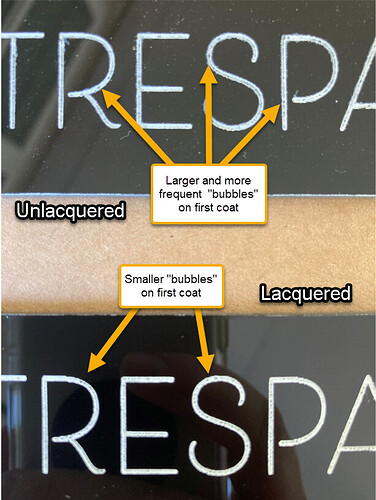 Lacquer (or clear poly) can be used to prevent paint bleeding into the cut/engraved edges of wood, which is porous. Not an issue with acrylic.

Ah! So interesting. Thank you for clarifying. I’ll keep that in mind.