Another classic game that made its way into our household in the early 2000s. I remember playing with my mom and dad every Friday night followed by a blockbuster movie.

This is made with 0.19" thick African Mohagany MDF. Finished with glossy poly. 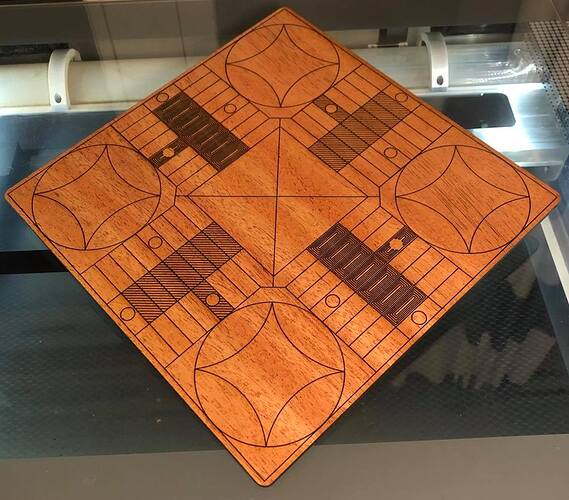 Object:
Be the first player to get all four of your pawns into your home.
Contents:
Game board, 16 pawns (4 each of 4 different colors), 2 dice

Set Up:
Each player takes the 4 pawns that match the large circle nearest them
and places each pawn on a small circle. Roll the dice to see which player
goes first; then play moves to the left.

Playing:
Moving onto your start space:
Roll both dice. In order to move a pawn from its circle and onto the start
space, a player must roll a 5 OR the total of the two dice must add up to 5
(a roll of 4 and 1 OR 2 and 3). If a player rolls TWO 5s, they can move two
pawns onto the start space (as long as there isn’t a pawn already on the
start). If you have a pawn on your start and you roll two 5s, you can only
move one pawn out to share the start space.
If a player does not roll a 5, or dice that add up to 5, they can’t move out
and the next player goes.

Doubles: Any time a player rolls doubles of any number, they get one
extra turn after taking this move (even if they roll doubles again).
Landing or passing another player:
If a player either passes or lands on a space that is occupied by another
color pawn, the pawn landed on goes back to its large circle.

Safe spaces: Any pawn/s that are on a space that has a small gray circle
are safe. They do not go back to their large circle when another pawn
passes or lands on them.

A pawn can always land safely on a space that has the same color pawn
on it, but no more than two pawns can be in the same space.

Reaching Your Home Path:
Once a pawn is on one of the 5 color spaces leading up to its home, it
cannot be sent back. Pawns can never enter a home path other than their
own.

Ending and Winning the Game:
A player must reach their home space by exact count. The first player to
get all of their pawns home is the winner.

Thank you for this beautiful gift. We had a Parcheesi Board when I was young, but it was not nearly as nice as this. The wood is great.

Awesome job! Thank you for sharing!

This is great thank.

So is Sorry basically just Parcheesi?

I remember playing this with my first family long ago. I haven’t seen it in ages (not really looking) so I thank you and will make this then play with my now family

I also used to play this years ago. Thank you for sharing!!

Thank you for sharing!! I have never played this. Will be reading the rules to learn more