A claybord is often used as a way to get more depth and contrast in a painting or drawing. Its basically a thin layer of clay spread over some particle board. The artist would scrape away the areas that would be darkest giving them more depth before painting over them. There are other uses too but thats the main one. I figured since its just clay it would be fine to pop into the laser and the results where pretty good. The level of detail is amazing even on lpi. I need to do more tests to see if i can get more contrast and clean it up a little but for just guessing im really happy. One problem iI did run into which you can see int the photo is the wavy lines. My guess is its clay dust that is pulled over the photo from the extraction fan because when it was only partly done the detail was so good i could see the checkered pattern on her shirt but as it got farther along it started to faid. There really isnt any smoke at all or smell which is nice. 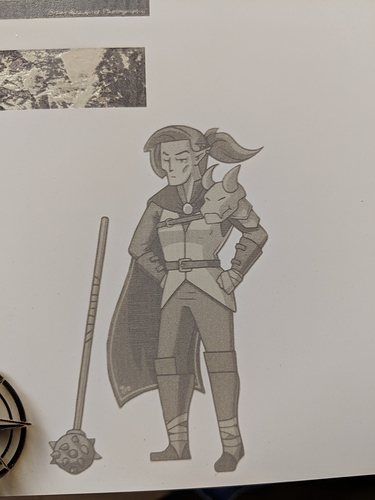 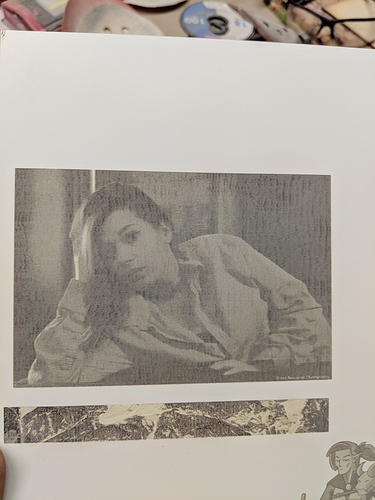 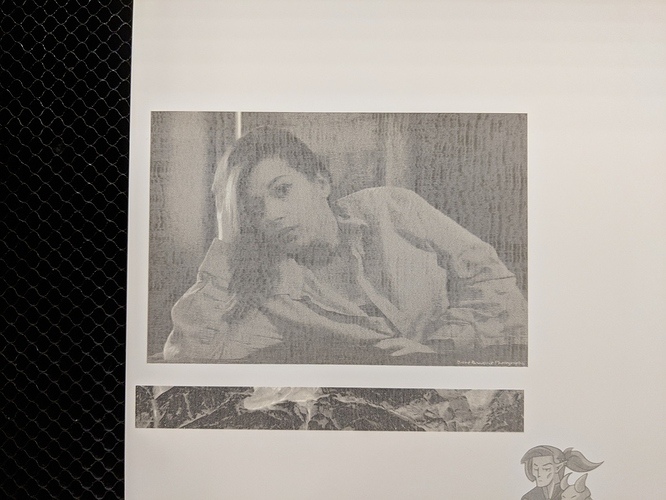 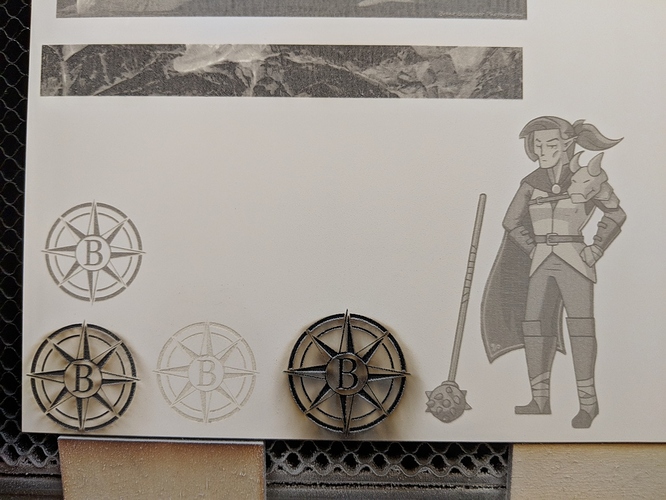 IMG_20180803_203347.jpg1154×866 275 KB
i ran a few tests, the dark b’s are all the way down to the particle board and i got that by going full speed and 90 power. The image was done full speed 80 power 340 lpi vary power. Curios to see how converting it to dots works or maybe a slightly smaller image to see if the dust doesnt ruin it. I sprayed a coat of clear lacquer because it will crumble if you touch it and you will lose your shading which i did deliberately on the middle B. All in all not bad but more testing required.
19 Likes
Jules August 4, 2018, 1:00am #2

That’s really cool, but I have to toss a warning out. Polymer clays are frequently made with a PVC base (they’re not natural) and PVC is a big no-no in lasers.

The risk you run lasering it if it is PVC based is rapid corrosion and damage to the machine, as well as health problems to yourself if you breathe it.

So I’m not sure how safe it is to use the laser to burn the coating away.

(If you can…you might want to find out the composition of the coating before burning any more.)

That’s a good point deffinetly something to check.

Clayboard isn’t made from polymer clay; it’s made with real clay (the kind that comes from the ground).

it’s made with real clay (the kind that comes from the ground).

How much is in the ground? Is there a forthcoming clay crisis? I wonder about some of these natural products and whether we’re using them all up (like diatomaceous earth - it’s used for all sorts of stuff, filters especially, but how much can there be since it’s the bodies of ancient organisms).

I think it will take us a while to run out of clay.

Punch it 'til it works! Love that there’s another Drawfee fan among us 'forgers.

Drawfee is awsome glad someone knew who that was! If you want to check out some other stuff Ive posted on here I’ve done a bunch of drawfee related projects.

There is plenty of clay left in Missouri. When the blast furnace steel mills shut down and moved to induction, the need for firebricks went away. Around Mexico, Missouri had up to 5,000 people working in the big brick plants. It’s still a great clay. Got some powdered kaolin when I was building my oven.

I checked just to be on the safe side and it says all natural and no mention of any pvc so I think I’m safe. That is something to think about though because I just though oh it’s clay thats basically just dirt and water how bad could it be but you always need to think about what other ingredients may be going into even seemingly natural materials. In this case I also checked for dyes or binding agents.

My house is built on a bed of Bentonite clay, The Denver Aquifer. Sediment washed off the Rocky Mountains, among other things, it is used in pharmaceuticals as a filler. Introduce water, by which capillary action penetrates between the platelets, and the hydraulic pressure will lift a house. Ask me how I konow that.
We will never run out of clay.

the hydraulic pressure will lift a house

Not in a fun way, I’m guessing?

Very cool! I was wondering if that Claybord would be useful in a laser. I like learning about new materials.

I wonder if you could follow up with a low power pass to dislodge some of the dust? Not enough to engrave deeper, just enough to move the dust. 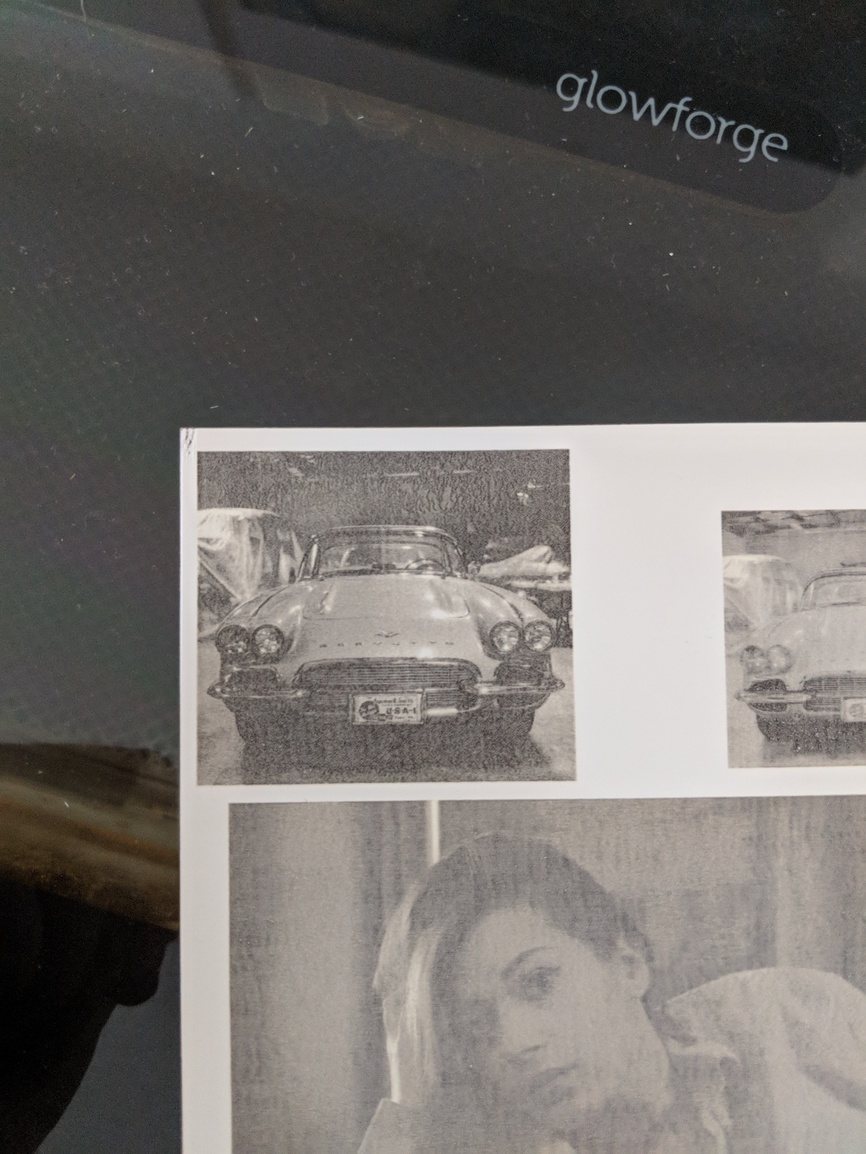 so far here is the best result. its converted to dots, full speed, 86 power, 340 lpi Just for context this was a black and white shot I took on 120 roll film at work so it was already very high contrast and black and white.