I know folks have seen some amazing vehicle projects here on the forums, and this (while real) is almost a tongue-in-cheek version of those, but I did pimp my ride. Now for a philosophical question, have you ever considered the electrical system of your snowblower? I know, I know, you’re thinking “my snowblower has an electrical system?” well, of course it does, since they aren’t diesels, and I’m not talking the electrically powered ones, they have to have something generate the spark, so traditionally that’s all it does. Now mine also had a headlight (a small halogen bulb).

Now other than a geek exercise why would one contemplate the electrical system of your snowblower? Well because you need to add some serious lighting. Now why do I need such serious lighting? Well because despite my city narrowing our street (such fun) by almost 5’ to make the street exactly 2 plows wide they always fail to plow to the curb leaving our street actually way too narrow so I am often out in the street snow blowing the snow bank back to the curb (we’ve tried putting reflective markers on the berms, etc, and nothing works). The biggest challenge is I live right past a chicane in the road, and the plow never quite gets back to the curb for about 50 yards after coming out of the turn. So this means I am out in the street in the dark and since streetlights are far apart on our street (normally I love the lack of light pollution) I needed to be able to both see and be seen.

So my first lighting mod was buying some ATV LED headlights and hooking them up in place of the halogen. They worked pretty well, except weren’t nearly as bright as advertised. Mounting them was a little tricky so I ended up cutting come reinforcing grommets with the Glowforge in acrylic for where the mounting bolts go through the plastic deck of the snowblower controls. I did notice that whenever the snowblower was really working hard (like a snow bank) the lights would dim and pulse slightly. But for my purposes seemed OK.

But at the beginning of this year I had a close call with a plow in the dark, and decided I needed to pimp this ride to be more visible. Luckily you can purchase LED based hazard strobes (like you see on every emergency vehicle) the ones I purchased fit into the side turn signals of a car and are only a few mm thick. They have something like 30 strobe patterns and are pretty clever in that the first one you hook up becomes the controller and all the others after that listen to it. You switch patterns by grounding the blue wire to the negative lead, and you cycle through each pattern.

What I quickly discovered was just like the headlights they weren’t quite as bright as I had hoped. They also didn’t seem to want to cycle through the patterns and mostly had a fairly high-frequency pulsing effect. I mounted them using 3D printed mounts to the handlebars. But then the problems began which was when I would engage the blower in a snow bank and the engine would slow the blinkers got very unhappy and would blink very rapidly in almost a shimmer effect and dimmed and now the headlights would dim greatly and pulse at about 2hz.

So I first figured I had overloaded the alternator and looked into upgrading it. The toro I have is powered by a Tecumseh engine which has an “alternator” about as sophisticated as the little generators we all built in 2nd grade. My father who owned a model T informs me it used the same design, which are a bunch of magnets glued to the inside of the flywheel and a coil bolted on the front of the block. I looked up and yes, you can get a much more powerful alternator that fit my engine off eBay and a bigger coil which would triple the capacity (used in models with heated handlebars). My father (an electrical engineer) informed me that wasn’t my problem, it was that the voltage was unstable when the engine slowed down. So what I needed was to add a battery (like a car) that could keep the voltage up when the motor slowed and the alternator would charge the battery. Well that had the appeal of not taking my engine apart, but then I realized I needed a rectifier/regulator like in the car to manage the battery charging. Then in a total face-palm moment realized I had been running my lights on 12V AC; now the good news is LEDs are diodes and so will deal with AC but that means they are only getting power for half the waveform. OK down the rabbit hole. I ordered a super cute tiny moped/ATV lead acid battery (about $20) 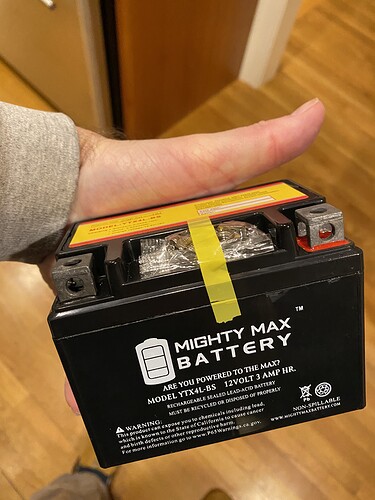 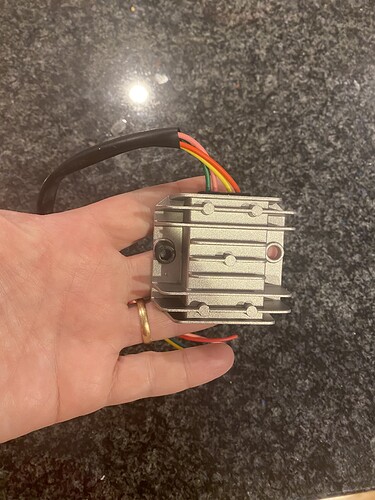 Then I had to design a 3D printed case since a snowblower has no mounting points for anything. My case used a clamp to hold onto the cross bar of the handlebars, 3D printed, worked remarkably well (well initially wasn’t awesome, but we are in the rabbit hole now) 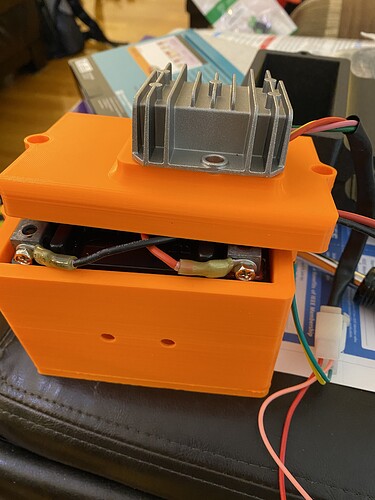 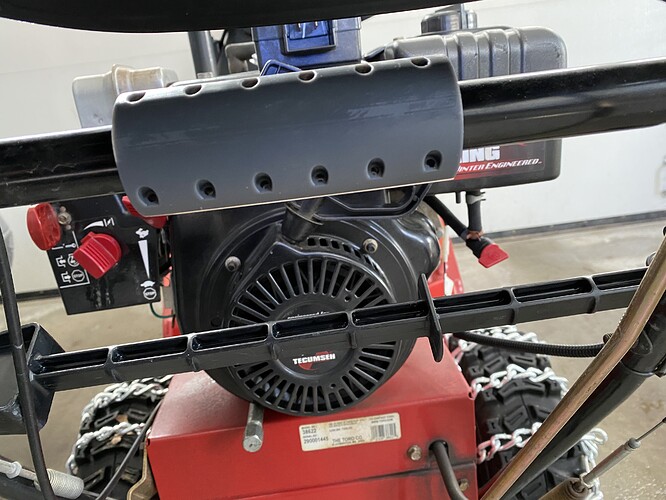 First thing I realized was I needed some fuses for safety (the holes in the case front is the mounting for the fuse box) so I ordered a 4-circuit fuse panel for an ATV and mounted that: 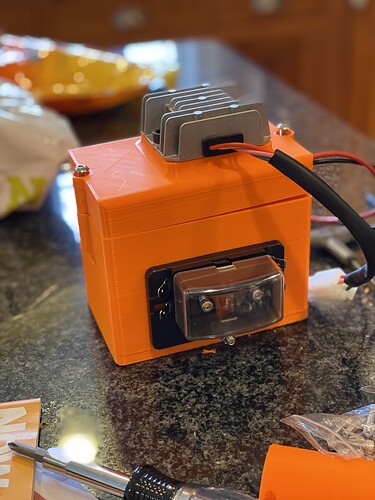 This is when a deeper dive into the electrical system happened. The engine wouldn’t start when I Hooked this all up. My father me disconnect it and check if the stator of the alternator was floating (nope), so at this point I had a choice of diving into my engine and modifying the alternator or pivoting. At this point I thought about it and realized, wait, I’m not driving cross country in my snowblower so the lights only need to work for a couple of hours, and if they run out then so what. So I will externally charge off wall power.

So I purchased a 2A trickle charger (NOCO) but then realized my battery box had no easy way to charge (I didn’t feel like taking the top off every time) but then found the charger has swappable pigtails one of which has eyelet connectors which I could bolt on and just have that pigtail permanently attached. Problem solved. We had a snow storm coming that evening and so put a quick master switch in the circuit before the fuse box and then set out to snowblow. The lights were insanely bright now that they were running on DC and stayed constant regardless of motor speed.

Now the next thing I realized was having the switch just dangling off the cord was never going to last so that needed a mount, and in a total fashion faux pas had printed the case in orange (Ariens) while I owned a Toro (red) so clearly that needed fixing. I also moved the fuse box to the top as I no longer needed the rectifier. 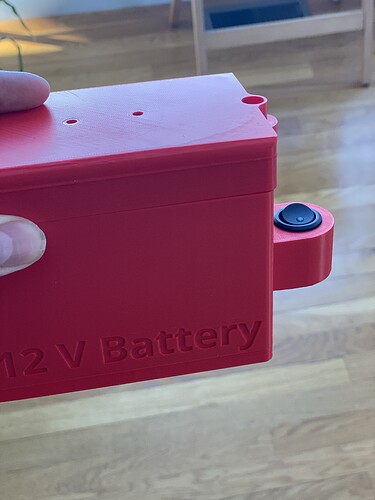 image3024×4032 2.37 MB
So now it has an illuminated switch. I also realized since the box isn’t watertight (no o-ring) I put some drain holes in the bottom and studs to lift the battery 1mm above the floor to allow any water to seep out. We’ve had 2 storms to test it all out on and works great. Even better I ran out of fuel on the street, and felt pretty safe leaving it there as I ran up the driveway to get gas that nobody would run into it, now that the lights stay on even if the engine is off. I can independently switch the strobes from the headlights.
24 Likes
geek2nurse February 22, 2021, 1:57pm #2

When I saw the title I really hoped this was going to be for Luna.

That had to be very satisfying, nice work.

I really hoped this was going to be for Luna.

as sophisticated as the little generators we all built in 2nd grade.

I don’t think even Hanahauol was teaching that in second grade even as they were teaching French and arithmetic and a lot more.in kindergarten.

Masked medical professional during the day— MacGyver at night!!

That was an awesome engineering hack. You are a very talented guy for sure. I love that battery box. What type of 3D printer made that?

Check out drone lights if you decide to do it again. Lots of anti-collision lights (I like the Firehouse ones) available for night flying. About the size of a quarter and visible for 3 miles. They are rechargeable & last several hours or you could just power them via a USB power pack. You can also get white ones that ratchet up visibility all the way to artificial sun that are used in SAR.

All of that was on a Prusa i3mk3

Your battery box is first rate. I can’t imagine where you get all the time to do so many cool things. I thoroughly enjoy seeing everything that you are making.

I always learn something new with your in-depth posts! Today it was “a chicane in the road”, a term I have never heard before. Glad you are well lit and we don’t have to worry about you getting flattened out in the snow!