My son is a Cub Scout and we’ve had fun in recent years making cars for the Pinewood Derby race. Even though Mark Rober is sort of right (dads do most of the work), I’ve been trying to get my son to do more and more of it. But he’s still too young to be getting his hands really close (less than half an inch) to a scroll saw blade trying to cut thru 1.75" of wood. But now we’ve got a Glowforge, so he/we can make design choices that don’t require risking his fingers!

I’ve been doing some testing with a dummy block of pinewood, to see how deep we can engrave holes to put weights in, and whether we can use the GF to cut all the way through for shaping.

I tested engraving a 3/8" diameter hole at a few different speeds and depths (and LPI by accident), and when I combine them in a single equation, I get a pretty good relation between those factors and the hole depth: 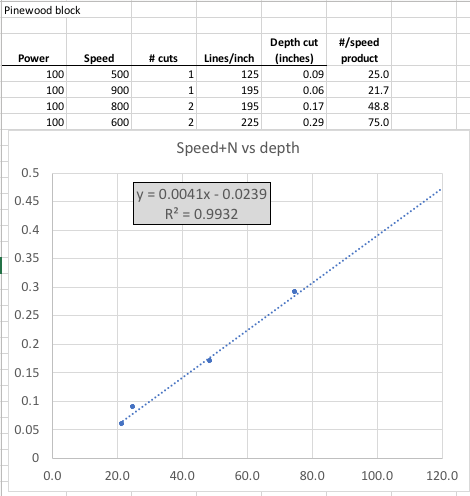 I tried a settings combination using 3 passes that should have given me a depth of 0.45", but it was closer to 0.42". I think that’s due to a combination of the focus being at the wood surface and not down the hole, and soot etc. partially blocking the beam on the third pass.

I also did a few different line cuts to see how deep we could cut. Then I used a chop saw to cut part of the wood away to see a cross-section of the cuts: 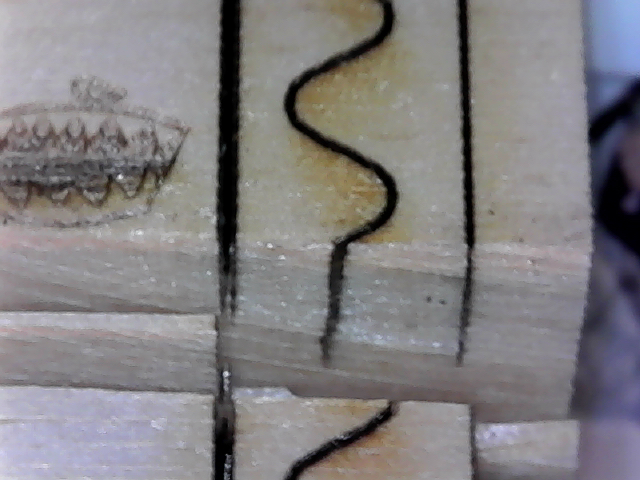 Going from left to right, I had:

I may do more experiments with changing speed, doing separate passes each set to a different focal height, etc., but it’s clear that we could cut all the way through at least 0.4" thick wood, and probably more.

The weird feature in the upper left is a shark mouth from some airplane nose art. My son said he wanted to put a mouth on his car, and we may just engrave something like that!

I had a post where I made some coin banks for my kids where the center sections are made of .5" common board(which I believe is pine) after some trial and error I was able to figure out a good setting to cut through the entire .5" It took 3 passes at different focus heights but worked out great in the end. im sure there are other settings that would also work, but once i got to one that did… i stopped tweaking.