Wow! I’ve had similar ideas running thru my mind, but could quite bring it to the workbench. You, my friend are my new hero. The exotics add such an amazing . contrast. Thank you for sharing!-ok+8i

That wenge/padauk piece is still one of my favorite things ever.

Constant means: do it to all pieces

I use inkscape - set stroke to be 0.006”, then use the “stroke to path” function to offset the original path. I find that it gives better result than the offset function in some cases.
[/quote]

@evansd2 Wondering if you would be willing to provide more detail on how you actually do the kerf compensation. It’s making me nuts that complex curves don’t offset in a way that allows them to align when joined. I can see the problem in software. If I offset the wavy curves pictured here at .003", 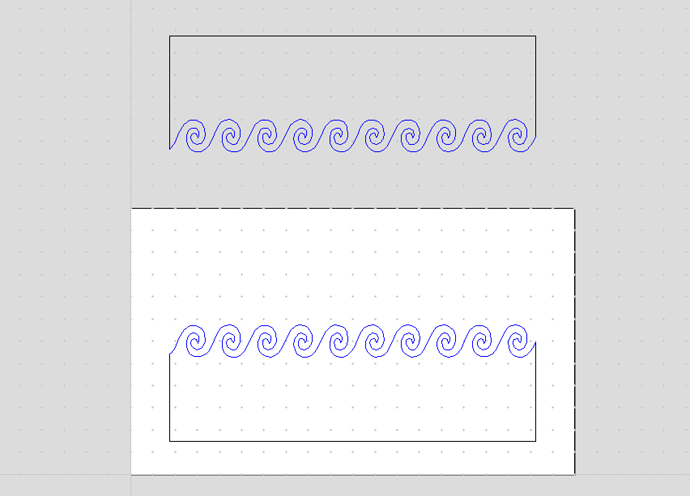 You’ll want to close your shapes and then kerf adjust each shape individually using a stroke line thickness equal to your kerf. It’s explained here:

You’ll want to close your shapes and then kerf adjust each shape individually using a stroke line thickness equal to your kerf. It’s explained here:

Inkscape - Adjusting for Kerf in your Design

Thanks @Jules ! I read the document, and it makes total sense to me. So if Inkscape isn’t a great solution for kerf adjustment on complex shapes, which is my particular problem, what is? Or is my wavy line example relatively simple and Inkscape would be appropriate?

I do all my work in inkscape and I use the stroke to path method to kerf adjust, just like Jules recommends. Given that you’re trying to emulate my curve I’d say you’ll be fine.

I’m not at my pc so can’t look directly at your curve, but if it’s got a lot of weird nodes sometimes that can cause issues with stroke to path. I’ll have to dig deeper in a bit… but the bottom line is that you want your path to be closed, you want your nodes to be necessary (no double nodes), and ideally sharp corners are to be avoided, as they can lead to unsightly overburn.

I talk a bit more at length in my various tray posts. You might want to search the forum for “@evansd2 tray in:first”, it’s where I apply a lot of these methods and discuss technique more deeply.

Thanks so much @evansd2. I’ve read your posts, which are the inspiration for all of this! It’s the actual process of kerf correction that I wasn’t clear about, and now I have a much better understanding. Good reminder about sharp curves too…The other challenge for me is that I am very literate in Vcarve Pro from CNC work, and minimally so in Inkscape. So I’ve been trying to do as much as possible in Vcarve before dealing with Inkscape. I know that I need to learn Inkscape or AI to take my laser design to the next level…

Love this forum and all the support! Thank you.

FYI - this is applicable to many applications. For the small community here of AutoCAD users, Jules’s Inkscape write up is invaluable as well. I’ve done some of my own testing / markups with AutoCAD and I’m getting pretty good at this.

Thank God for this community!

For the small community here of AutoCAD users,

“Solved”? No - but I haven’t seen a problem with it - yet. I’m about to start making some frames for kick ass retro National Parks posters we want to hang around the house (we frequent a LOT of National Parks as we love to travel and hike). I want to do something with different species of wood for each and will be trying to create a thin (1/8") laminate structure to put on the frame. Each frame will have some detail element on it that will utilize these techniques shown in the post.
I’ll post pics if it turns out ok.

I use AutoCAD exclusively and have done several wooden signs with extensively curved letters. I create the lettering in Illustrator, export it out to AutoCAD, explode the text once in AutoCAD and it’s converting the letters into Splines. You give it a level of detail when you do this, I’m using the default of 10 when I do, and I haven’t had a single issue yet using this technique. They may be tiny segmented curves, the the GF cuts them perfectly as an arc.

I’ll do some testing tonight during our latest blizzard here in Denver.

In creating polylines it is all arcs and lines (complex lines cannot be included in polylines). I wrote a Lisp routine the would test a series of filleting from tiny to large so each arc was as big as would fit in the location and every one was tangent at every end point.

Depending on the settings arcs are drawn as a series of straight lines when displayed and the default was pretty awful as early computers operated more slowly when trying to display an actual arc. Long ago that setting was ridiculous, but it was still the default the last I looked,

No matter the display even on the old computers the info was always stored as an arc.

I’ve been thinking about this and again will do some sample cutting (last night wasn’t the right night for laser work). But the tolerance for a spline can be set - typically it’s a factor of 10 as a default when you convert a spline (I have no idea what this means) but I’ll do some test cutting to figure that out. BUT - why would it matter? If both mates of a cut are using the same technique, and something is segmented on both sides using exactly the same line for cuts (offset to compensate for kerf) I’d wonder if you’d end up with gaps. I could be completely wrong and perhaps the line segments with the offset would produce a gap, but at that small of scale I can’t believe you’d even see them let alone have them throw off the cuts.

Ok - so first tests from AutoCAD - and granted I’m both stealing a design from evansd2 (who is AWESOME BTW) and trying this on proofgrade materials. I plan to order some 1/8 hardwoods from the various Ebay shops in the next few weeks as soon as I figure out exactly what I want, then I’ll nail this down further.

First pic - this is cutting 2 segments, one out of Maple, one out of Walnut, and the kerf on the Walnut is offset .005 - when I tried to do this with both segments, the pieces wouldn’t fit together as that was too much compensation for the kerf. It’s not perfect, and in watching the laser fire and cut, I’m puzzled as to why it cuts the way it does. Everything is on the same layer in CAD, and these are circles, cut into arcs, changed into Plines and joined together. So it is a contiguous line in AutoCAD but it treats it on some level as just arcs. It’ll cut the bulk of the arc together, but the small “cap” on the ends that’s a .1 arc, it doesn’t continue around that arc, it does everything then cuts it at the end of the cut. Weird. 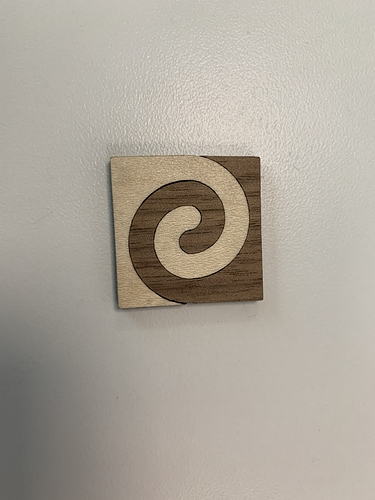 Here’s the same piece flipped over: 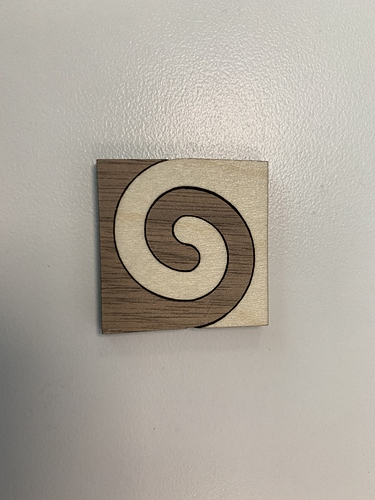 You can see what evansd2 is talking about with the laser cutting at an angle. That’s the same piece with a very tight kerf, but there’s a significant gap. Honestly the gap looks pretty cool as it adds a black line around the cut, kind of like a micro inlay, but if that’s not the look you’re going for, more kerf analysis is needed. Luckily evansd2 has given us many many posts on all of this, so all I need to do is figure out the “resolution” issues with CAD.

I say this as the arcs aren’t very accurate, which I think is a function of the PDF I’m creating using the plot command. I’ll test that theory more tonight (unless I’m painting the upper hallway).

Good gravy, that is some incredibly beautiful stuff!

EDIT: Oops – meant this as a reply to @mrinken!

Are you cutting one piece right side up and the other upside-down like (I think) @evansd2 does? That matches the slants and lets you get a little tighter with the kerf.

Another trick is to set the focus to half less than the height of the wood – @jbmanning5 does that with his puzzles, and it makes the kerf look smaller on the surface. (Updated per @jbmanning5’s response below)

As for the laser path – your arcs must not be connected. They need to be joined into a contiguous line segment for GF to treat them as one continuous path.

Are you cutting one piece right side up and the other upside-down like (I think) @evansd2 does?

I do and he did not it appears.

Basically flip one side in your art horizontally before you cut and go from there. You’ll get more even kerf compensation and can most likely up the amount you’re compensating.

The tricky part is knowing how much to correct because if you go too tight you can deform your pieces and end up with strain escaping as a deformation at the edges. We’re actually seeing the beginnings of that in meinken’s piece, you can see how the edges don’t exactly match up. That could be down to a missed symmetry in the source art but it often comes from going too tight on your kerf adjustment.

Nope - I wasn’t doing that. But this was a first test - I’ll set the kerf adjustment for .003 tonight and flip the design before the cut and post some results. Again, this was proofgrade, not sure that matters (and I was using proofgrade settings).

And my buddy who owns a cabin up in Grand Lake said it’d be cool if I could do this for his drawer fronts on his drawers with a pine tree cutout. Going to give that a whirl too…