This was a pretty fun and informative practical build. I needed a stand for my HVLP spray gun so I could easily filter materials and fill the feed cup. It will also be handy for when I don’t want to empty the cup between coats of whatever I am spraying. These can be purchased, but I was having trouble finding one that would fit this small gun (for a reasonable price) so I though I would make one and, at the same time, use the opportunity to sharpen my ever struggling, but improving, Fusion360 skills. 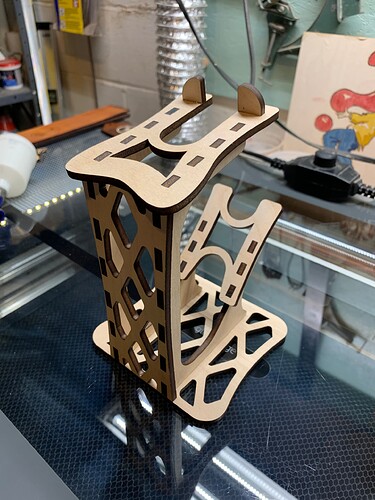 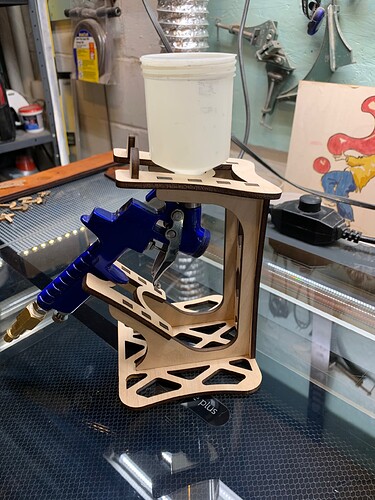 So, a couple new to me techniques that I employed in this design…
Fusion360 allows you to import a photo into your design (in my case, I imported a profile photo of the spray gun taken with my phone) and scale it to actual size. I was then able to use the photo to essentially build the stand around the gun. This was invaluable in getting the various standoffs and cradles in the just the right position to hold the gun in the position I wanted it.

Additionally, after many aborted attempts and several YouTube videos, I was also able to hammer out a pretty easy way to make the diamond pattern on the base and the back by using the repeating pattern function. This also turned out to be a fantastic way to quickly make perfectly sized and spaced tabs and slots for assembly.

I know many of you on this forum probably have mad 360 skills. For those who don’t (myself included), but have always thought it might be useful and have wanted to learn, I would encourage you to give it a try or pick it up again. There is, admittedly, a fairly steep learning curve. I have been slogging my way through it for about a year now. If you have any interest, however, in making 3D objects out of an assembly of parts (including boxes which I know many of you do) I think you will find it an invaluable tool. Best of all, Autodesk offers a free hobbyist license. They deactivate a few features, but I have not so far found any of them to be necessary. There is also a wealth of instructional and tutorial videos on YouTube. This is pretty much how I have taught myself.

Anyway, happy making…however you may choose to go about it!

Very nice! I love practical builds and nice uses of Fusion 360, this has both.

The thing about Fusion 360 is that it does not have all that steep of a learning curve as much as one that is kinda like a curb. Looks super steep from the beginning but push past that and getting better is a pretty normal gradient.

That’s a really good way of describing the process. The hardest part for me was getting up over that “curb”. Once I had internalized the basics and fundamentals of 3D design the rest has been a pretty steady (and fun) acquisition of new knowledge and skills.

I like the look of it! Kudos for working through Fusion 360 to get where you wanted to go!

Wow that turned out nice!

I am so busy with work I haven’t had time to make anything. I do have a couple projects that I need to do for someone else this weekend. Living vicariously through the creativity of the Glowfolks.

Even though it’s a practical build, it’s really quite lovely. Well done!

I’ve tried to go up the fusion 360 hill of a learning curve couple of times now. I returned for another time and couldn’t find a free option anymore for hobiests. Is that indeed gone, or is there a way to legally use the software at a free or reasonable rate?

Yeah, they don’t make it super easy to find. This link should get you there.

Compare features and functionality between Fusion 360 for personal use and Fusion 360 and learn which CAD, CAM, CAE and PCB software is the right solution for you.

This guy has a series of very clear and concise tutorials targeting the absolute beginner. Helped me up the learning curve quite a bit. 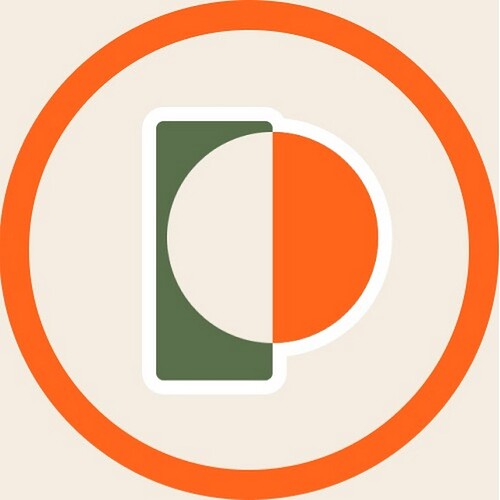 Making CAD Education Accessible. Learn Fusion 360 with our concise tutorials for 3D printing, woodworking, and more! Are you looking to create your own designs in Fusion 360? Join the PDO Academy and gain instant access to our step-by-step Fusion...