This is a gift for our neighbor. He has suffered from PTSD for many years, and it has been getting steadily worse. He found that making rosaries with different kinds of beads and giving them to charity gave him helpful therapy, and we had him over for beading tips a time or two. (He even gave me a set even though I’m not Catholic). Now his disease has progressed to the point where he can no longer make them, so he told us he wants to give us the 1-step looper that was his most prized tool. I thought I’d make him a rosary box in return. 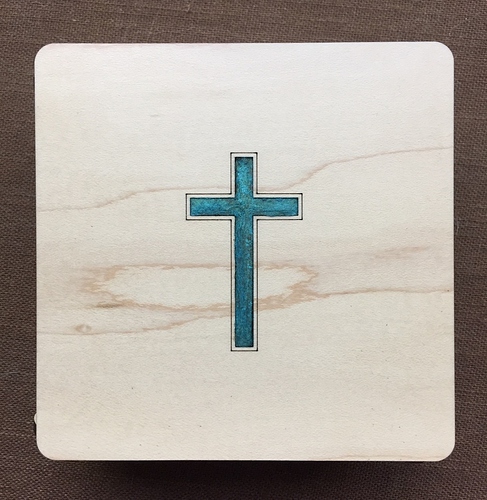 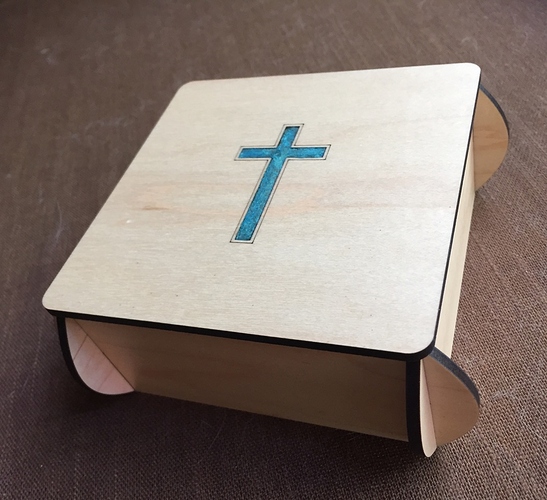 It’s a very simple design, with a single half oval tab on each side, made out of Proofgrade 1/8" maple. SO nice to not have to apply finish! The top has a cross engraved into it with a scoreline surrounding it. I made a prototype of the box and lid in 1/8" Baltic Birch, and I had intended to do a walnut veneer inlay into the box lid. But while the inlay fit perfectly in the BB box lid, it was a hair too large (I believe due to the smaller kerf of the Proofgrade, which I did not adjust for), so it got mangled when I made the attempt. So I dug most of it out with a craft knife and rather than cut a new one I decided to do a resin inlay. I used Magic-Glos UV resin with Pearl-Ex mica powder added to give it color and sparkle. I really like the effect.

decided to do a resin inlay. I used Magic-Glos UV resin with Pearl-Ex mica powder added to give it color and sparkle. I really like the effect.

I really like the affect also. Now to go research how to use Magic-Glos UV resin with Pearl-Ex mica powder added

What a lovely gift! The box is elegant in its simplicity.

And I do hope that he is able to find another outlet. I’m a firm believer in the notion that Art Heals.

Beautiful thought and gift. Simple is often the most elegant.

Great looking little box. I love the simplicity and your warm regards along with it. I’m betting he will be very touched by your thoughtfulness.

Very good. I’ve been taking notes for getting our church gift shop off the ground and this type of box would be good. The resin is so nice. And the ProofGrade finish is just so good to have. Thanks for sharing.

I used Magic-Glos UV resin with Pearl-Ex mica powder added to give it color and sparkle. I really like the effect.

Wow, I don’t know how a walnut veneer would have looked, but this is so cool. It looks like turquoise, which having lived in Israel for several years, you would see on many of the traditional/historic local religious artifacts used as an inlay. It immediately made me think about a “holy land” type artifact.

I used Magic-Glos UV resin with Pearl-Ex mica powder added to give it color and sparkle. I really like the effect.

That resin inlay is absolutely gorgeous! It looks like turquoise inset into the wood!

So considerate! If only we could respect each others beliefs and leave it to the God(s).