Pricing feels hard, curious what other people are charging for an 8x10 photo considering engrave time, material, paying yourself…? 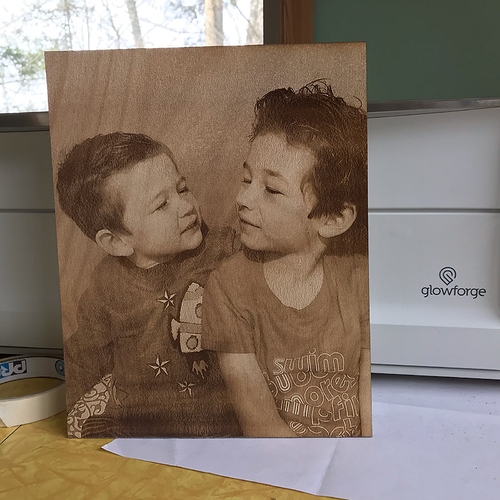 Don’t know the answer, just have to say you did an outstanding job on this one!

thanks! I think the credit should go to the photographer, I really didn’t do much, brightness & sharpness key!

I have turned down a few and suggested they get another photo without a lot of face shadow.

Wasted a lot of time before I realized those were time sinks.

I have been charging $20, but that gets accepted so quickly you just know you low balled it.

I have been charging $20, but that gets accepted so quickly you just know you low balled it.

That seems really low - consider cost of power/fan/laser life/time/experience into the equation also the material costs. Figuring out pricing is frustrating but valuing your skill set and abilities is important. I definitely still struggle with this as a working designer that makes things on the side.

For a freelance project that involved an engrave, I did a price check of the file with maker-friendly outsource option Ponoko. I used that as a reference point and factored other things in when pricing the job.

Yeah, you need to at least double that for an 8 x 10. Those take forever to engrave.

I’ve said it before but it bears repeating, if you’re not embarrassed your charging too little.

I can’t tell you what the market is on those, but if you’re doing various sizes, the easiest method for printing at least, is to establish a price per square inch.

That price can vary depending upon the artwork. For example, a painter gets multiples per square inch of what a photographer gets.

i think the problem with pricing photos is figuring out how much time you will put into pre-engraving file prep. and testing. and conversations with the client about the quality and engravability of the image they want to use.

pricing out the actual engrave itself comes down to what you want to value your engraving time at (i.e., material cost + labor cost + whatever you want to tack on for usage cost (electricity, eventual tube replacement, the space you give to your shop, etc)).

but that prep time is harder to estimate for me. it varies.

The thing with that model is that as you become more proficient and master the editing process, knowing how your input will translate to output, you should be charging less because it takes you less time. But, a master of something shouldn’t charge less just because they are a master and can do it faster and better.

Check out Etsy to get a feel for pricing. I have seen $45 to $135 for 8x10. Quality engraving such as yours can fetch the top end. Some people create a personalized frame for the picture & fetch more.

i agree that you get more proficient as you go. but i still think it changes your pricing model. you’re building in profit, but you’re accounting for your increased cost in valuing your time more instead of planning more time. sounds a little weird, but when i was doing some freelancing as a designer, i changed my hourly rate to do a similar job (both 500 pg yearbooks) a few years later because i was more experienced. but i did the job faster. in the end, the cost to the client was similar, but when i worked out all the production and design work in my estimate spreadsheet, it looked different.

may seem like it’s tomato/tomahto, but not every job ends up coming out the same when you change your hourly rate for estimating, but your number of hours goes down because of efficiency.

I have been figuring out prices on Etsy as well…I low balled one item in my business plan idea…it changes the dynamic for what you can do.

Great job on this. I cannot help you with pricing as I only do things for gifts for family and friends.

Very nice work! What kind of wood did you use?

I have been using baltic birch for mine, and have been charging based on time because the material is fairly cheap, with a maximum of $40 if it’s a single pass. My longest time spent on one is 2 hours 15 minutes. But I also have only been selling in person to people I know.
I haven’t delved into online selling yet.