Can you print arduino pcb’s. If so will boards be added to the laser approved materials in the store? 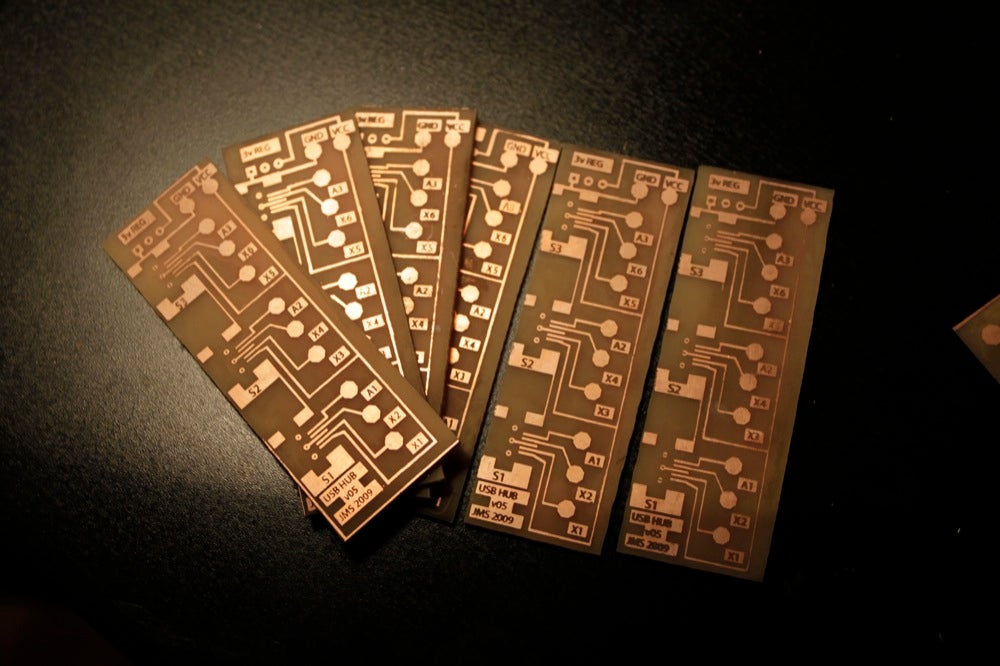 Custom PCB Prototyping Using a Laser Cutter: I am going to walk you through the process of prototyping a Printed Circuit Board using a laser cutter and supplies from your local Radioshack and hardware store.  This is a process I have perfected after...

Lots and lots of prior art. Just search the forums for “pcb”.

In general, the first step of posting here should be to do a search, it’s amazing how much info we have to share!

What I am reading is that removal of the copper surface is still best achieved with etching solution. masking with black paint as a resist and laser engraving the resist surface is the procedure described above…

A while ago, [Marco] mounted a powerful laser diode to a CNC machine in an attempt to etch copper clad board and create a few PCBs. The results weren’t that great, but the technique was promi…

Yup. the laser itself can’t remove the copper.

I’m wanting to do a bit of this myself. I get concerned, however, in that we are told that Copper is an excellent reflector of the infrared light produced by our CO2 lasers. In ablating the paint that is being used for resist, are we going to reflect too much of the laser light back into the optics?

No Idea… some of the people on those threads are suggesting lasering at an angle to avoid the reflection, so its clearly a concern. Maybe there’s a better way to laser the mask and then apply the mask to the copper as a transfer before etching… needs researching, I guess.

Got my GF yesterday, so I’m not exactly “expert” you know?

Two coats of black laquer. Then use the laser to remove what you want to etch. I had mixed results, and switched to laser printing on the silicone sheets. I’m about to do a photo emulsion PCB. That won’t use the Glowforge though.

I can confirm that it is possible.

Thanks for the suggestion! I’ll make sure the team gets the request.

Apologies that this thread was closed. It was opened in Problems & Support but shouldn’t have been closed after it was moved to Beyond the Manual. I’ve reopened the thread so the discussion can continue. 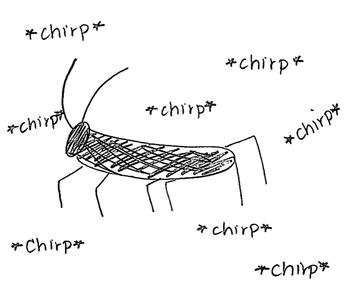 There was a post earlier about the reflectivity of copper, and some debate about the safety for the laser. I think it was confirmed that damage was unlikely. I was unable to find the reference however.

I cannot offer any procedural help, but I KNOW that copper mirrors are the best mirrors for the chinese lasers. Hence, polished copper is the IDEAL reflector for lasers. (SarbarMultimedia on youtube is my source for copper mirrors info) Given the context of this thread, I would NOT use copper as it would likely reflect the laser’s beam.

Rather than open a new thread on an old topic, I figured I’d add to this one.

I have been prototyping some PCB boards for arduino and Raspberry Pi projects for clients, and I have the process on the glowforge about as far as I will take it. 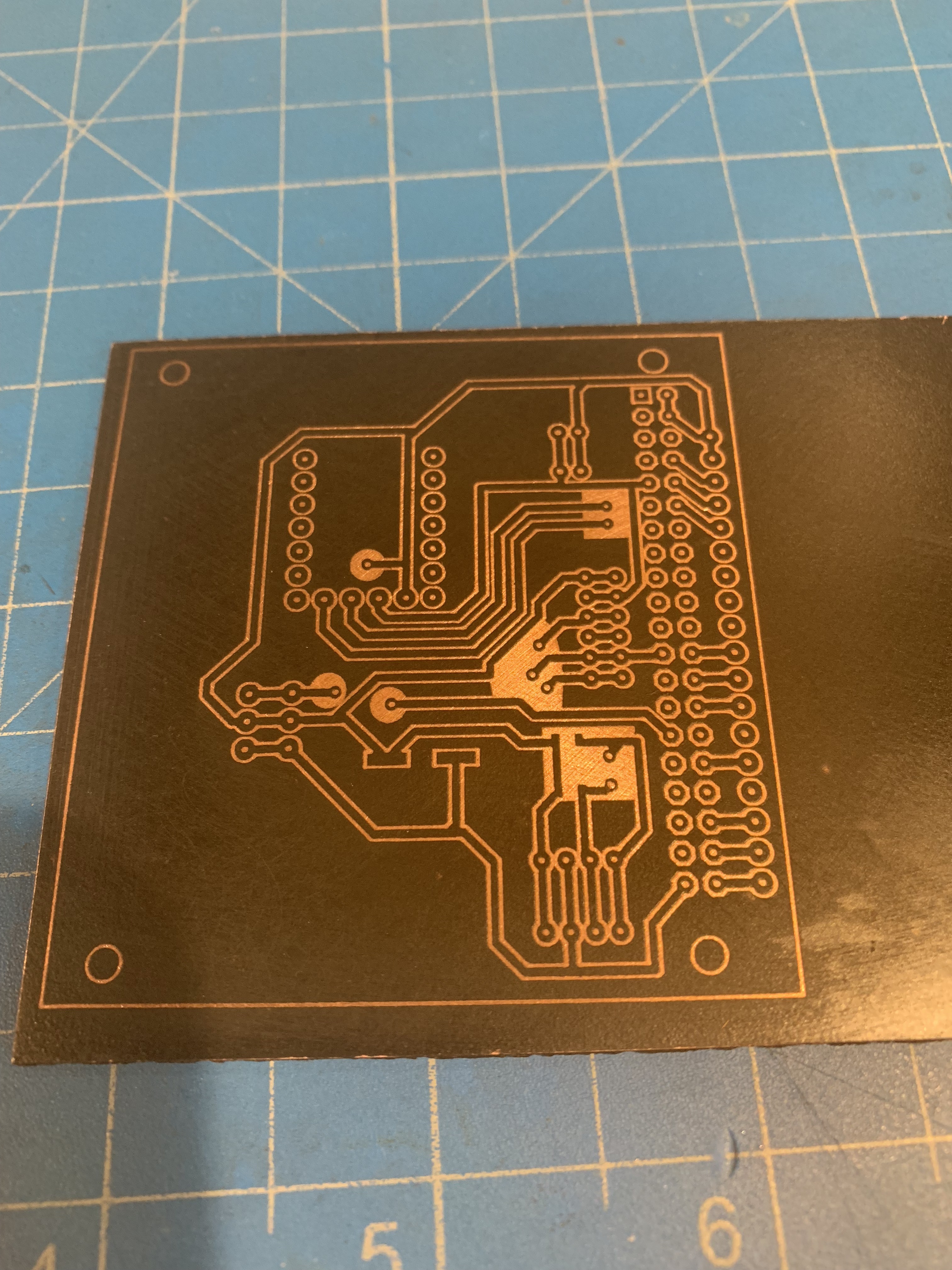 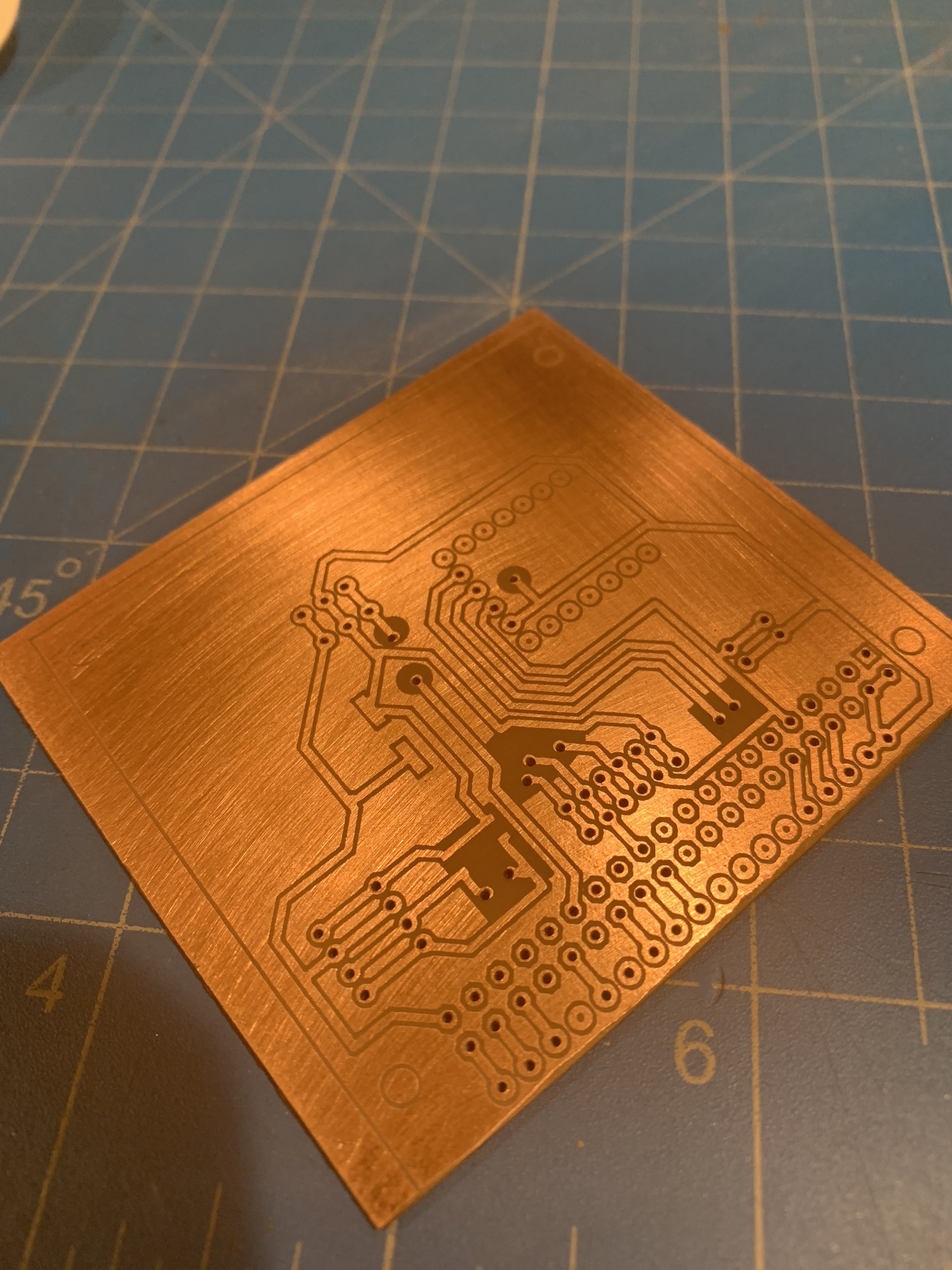 Exporting design from eagle to .EPS with the LaserCam CAM Processor. Cleaning up the design a bit in Inkscape.

Tip- to get a vector outline of the board Export the design as an 800dpi PNG file, then re-import the PNG and trace the Bitmap to Path. I will sometimes add some areas where I want extra material removed. In those cases I draw polygons and use the engrave feature.

I then use score rather than engrave to remove the acid resist.
3 passes at 250/44 if you do engrave instead, 3 passes at 1000/39
Extra power does not seem to help, and you lose detail.

Rub lightly with the 00 scotchbrite and etch.

For what it’s worth, there are vastly better tools for this that aren’t particularly expensive. Take a look at tools like the Nomad, the xcarve, etc. I think there are even dremel based options. The nomad is the one I have, and they supply tools for working straight from the eagle or Gerber files — as well as all the necessary mills and drills.

I’m still waiting on a job big enough to warrant a 3K purchase like the Nomad or a Voltera. Until then a $4 rattlecan and some carbide drill bits are gonna have to do!

if it’s that big, farm it out to osh park and just charge service fees

Oh, this is strictly prototyping, so I can get the components all working together without a breadboard, and so the client can start coding.

I then do a proper board and have it produced by a third party. 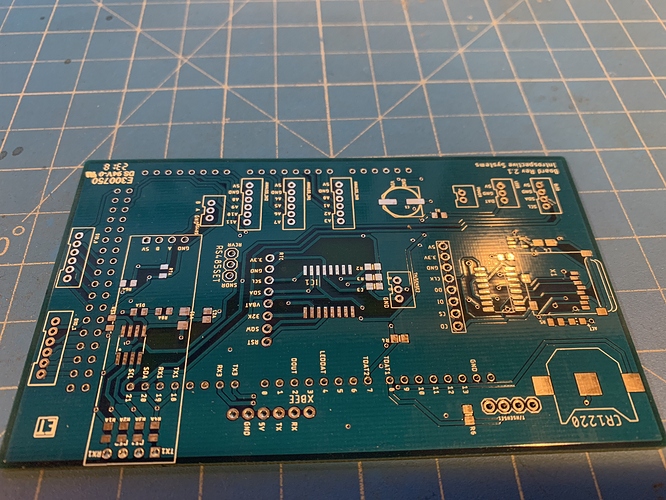