Here are some coasters I made last night. I used 1/4 wood for the frame. And glued it to 1/8 black acrylic. 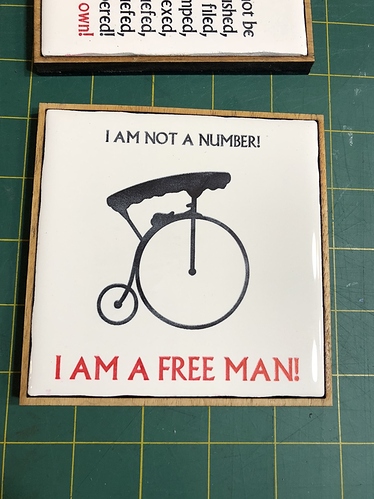 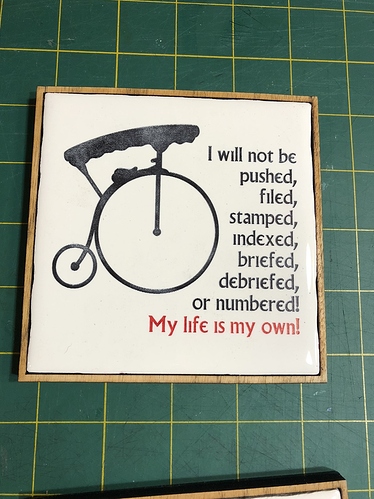 Who is number one?

You are gonna have to explain those to the youngsters…

Isn’t Patrick Mcgoohan dead? He seemed to have disappeared awhile ago.

I made a box for them too. Along with a glass. I had to improvise the box last minute. The glass is from the lady death episode and the box quote is from a poster in the hammer into anvil episode. 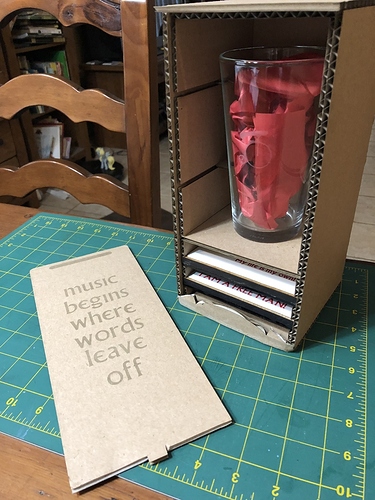 I love that show! Love your work too!

Like the frames! Takes it up a notch to add a box, also!

Nice. First TV series I ever saw on a color TV when I was a kid…

So, the tiles have little edges and aren’t square. I ended up using a dremel to grind off the bumps. It was easier than I expected.

Wow! That sent me down a rabbit hole… First the memory of the series, then over to Man from U.N.C.L.E. What great shows.

Oh and the tiles look great

Wow so far back I had forgotten and was thinking of those awful prison reality shows of today. That is a rabbit hole one has to climb a long way up from where we are now to find.

Wow! Those are great. Brought back memories. The first time I ever watched the show was late night on the SCIFI Channel in reruns (when it was still named such), but they did some sort of open chat in IRC that they relayed on the bottom of the screen in chyrons. It was interesting to see other fans of the show past and new interact with each other in such a way. This was back in the 90s.

Yay prisoner! So funny I just made this for a friends birthday…huge prisoner fan who also has a star trek themed cover band. They travel to every state with a burlesque troop and just won a contest in Vegas! So added a communicator in the wheel spokes…and wa la a
Hybrid mix of the two. The dont panic I gave out at a festival. 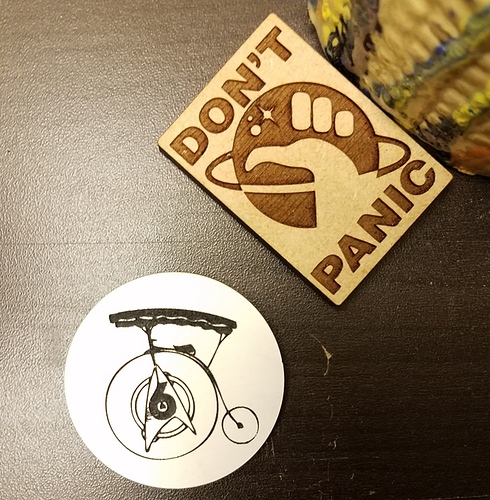 Gonna de-rail this now… What the heck is a Star Trek themed cover band?! Do they just play the theme songs to all of the series, or…?

With that low shade thingy I an so seeing that as an incredible 3 wheel power chair with huge side wheels.