Well, doing my first major project, (another German paper craft cutting board) on my Brand new pro - same settings, etc. and strangely same time as my plus. . . 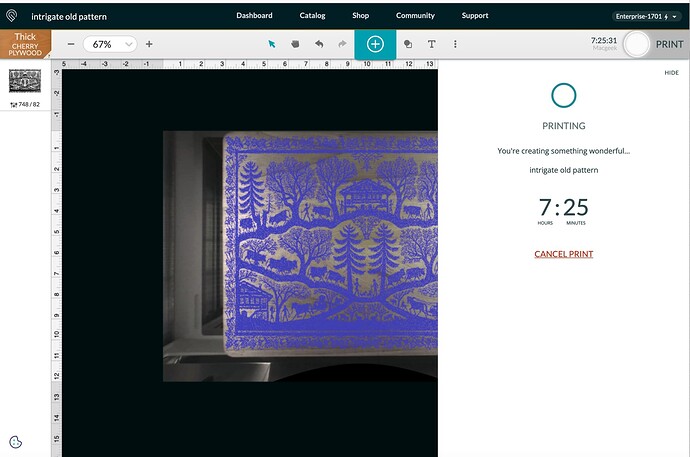 I am not sure why you think the time would be different if the speed settings on both machines are the same. 60 mph in a Ferrari is the same as 60 mph in a VW.

LOL I guess, I dunno all the shtick about fastest servers, fastest glowforge…
I thought they would put some WD40 under my tires

The faster servers have nothing to do with which model is being used.

If your Plus had the 45 watt tube that’s the same as the Pro. What you are getting is pass through and better cooling.

if you’re not running full power, all machines run at the same speed.

from 1-100, all machines are the same. the only thing that’s different is the pro (and early plus’s that were 45w) are giving you that extra 5w at full.

It is not at all bad to be engraving the entire working area of the Glowforge in 7 hours. I was just doing one half the area that took 4 hours yesterday, If you are using the entire board and a raster then speed increases up to the smaller working area it can manage. To get the deeper cut you could increase the LPI and still get a time advantage. If the area is more narrow this does not work due to the extra time needed to slow down, but at very long passes the balance of time taken moves to higher speeds.

Isn’t it that you have the option to use a faster speed with the pro? For example my plus tops out at 1000 but I thought the max on a pro was higher. Maybe I’ve misread things. Wouldn’t be the first time!

Both machines have two types of engrave. If it is a raster it will always go up to 4000 speed, with the expectation that there is many levels of gray and variable power might need to use a large range if that power is very low. A variable power that starts at ten has few places between that and zero to go to but marking something like paper would burn up at 100 power even at a speed of 1000. So to keep the power at full, one needs a much higher speed to keep the full power.

Engraving vectors, variable speed has no place so lowering the power does not have the same effect. They did have up to 4000 in vector engraves at one time but it was buggy. So instead of fixing the bug they just went back to 1000 as the highest speed

Both machines have two types of engrave. If it is a raster it will always go up to 4000 speed,

Depending on the material, I would find 1400 as too low speed for high LPI. Even acrylic, which will only look smooth at 1344 LPI would go too deep at 1400 and I go to 2500 if I want the engrave to be shallow. I have not tried anything needing 4000 speed but it is nice to have the range for anything under that

All in all, besides the passthru option, I really am not seeing any real difference between the pro and the plus.

The speed difference is evident when cutting. All Proofgrade cut speeds on a Pro are faster than a Basic/Plus as they’re making use of that extra 5 watts. A 30 minute cut job on a Basic will take about 25 minutes on a Pro.

As for engraving, I used to engrave some chipboard books at 2000 speed on the Pro. Such a speed isn’t available at all on a Basic. The Plus goes up to 2800 IIRC. But the default Proofgrade settings for engraving use the same speeds across all 3 machines, so you won’t see any difference unless you choose manual settings.

If you want your cutting board to engrave faster, you have plenty of room to increase the speed beyond the settings you’re using, with no change in engrave depth, by increasing power as well. There’s little reason to go slower than 1000 speed when engraving a black and white image on wood or bamboo. That job shouldn’t take more than 2-3 hours.

If I am doing a relief 3D which I usually am when using rasters I want as much detail as possible, so I am always running at full power so the variable power has the most range to work with. This leaves only speed and LPI so going at max LPI leaves only speed and as max LPI and max power are both at the hottest the speed also needs to be very high to offset that.