Problems cutting through materials all the way

I am struggling to get my Glowforge to cut through all the way. I have tried to cut a few different sheets of Baltic Birch plywood (3mm), as well as a thinner “wood chip” that I got from Amazon (2.5mm). I also had the same issue with the Proofgrade Draft Board.

So far, out of 20+ tries I’ve only been able to cut through once or twice, and that was within the first 5 cuts I made on the machine. Since then, I can’t get it cutting through completely. I have tried the following:

I’m really at a loss and don’t know what else to try. My crumb tray is a bit warped, and they are going to replace it, but I believe it is stable enough for me to cut a small piece of wood in the center. I was hoping this wouldn’t be so difficult. I know that using proofgrade materials is recommended, but I can’t fit anything wider than 12" without being un-level and/or wobbling concerns.

Can anyone think of anything else that I can try? I don’t give up easily. I’m running out of ideas. I just want to be able to cut through something all the way. Engraving seems fine, it’s just making the cuts.

Some laser rules to live by:

That’s about it. Testing is absolutely necessary for non-Proofgrade materials - many of them are substandard.

But getting a new tray in is also going to make a big difference, so understand you just might not make much progress until it arrives.

Thanks for the reply. I was doing quite a bit of testing on my BB plywood before I changed over to the small wood cut outs. After trying PG Medium Maple Plywood, I did enter the thickness of the material (based on my measurements with digital calipers). I was converting mm to inches, because I couldn’t figure out how to change the units. I think I found the setting to change it. I’m still getting used to the user interface.

I was pretty much following your steps above. I started with PG settings (medium maple plywood) and I was doing 2 passes every time I changed the speed. Eventually, I got about 3/4 of my wood chip to cut at 130 or so, but it wouldn’t cut the entire circle, probably due to some warping.

I did another cleaning just to be safe, and carefully examined everything. From what I can tell, I don’t see any issues, so I’m hoping it’s my own user error or the warped tray. Or a combo of both.

I’m pretty determined so I’ll probably give it another go tomorrow night, double checking everything along the way. Thanks again for the help.

Make sure the material is flat
I use a ton of BB - full/200 at .118 on a basic and it is perfect
Hoping you get it resolved

Guys, we have to keep actual settings information for non-proofgrade materials in the Beyond the Manual section. (Forum rules.)

So I’m going to shift this topic into the Beyond the Manual section. Fortunately Support is already aware of this issue from your earlier post and email, and duplicating them actually slows down the process.

Thanks, please forgive my newbie mistake. I am just really hoping to get some confidence that this thing actually works, as right now it’s just an expensive paperweight. My time is limited and I have a lot of travel coming up in Nov, and a lot of projects that I was hoping to start this month. Hopefully, the replacement crumb tray will help resolve my issues. Until then, I guess I’m on my own…

No prob! Pretty much everyone misses it!

And it will work, you just got a bad tray…it’s a minor fix, if disappointing, because you can’t get started right away.

Another evening of testing. I ended up getting the wobble out of my crumb tray by putting some tape underneath the side that was raised up. I carefully checked the measurement of the tray to the gantry, and confirmed it is within .05 mm on both sides in the back. The warp on the crumb tray is in the front right… and I’m avoiding using that side.

I conducted another round of tests, carefully measuring and changing settings. I tested with both the original baltic birch (3mm) that I had successfully cut before. I also did another round of tests using 4mm thick wood. I entered in the material thickness both times. I won’t go into the details here, but I methodically tested using different speeds for cutting.

No matter what settings I tried, slowing down the laser, using full blast, etc. I could not get the laser to cut through all the way. At one point I tried 4 passes and still no luck.

After doing a lot more research in this forum, I am fearing the worst, that I have a bad unit. It seems like I’ve done all the proper steps, including multiple cleanings of the lens, mirror, etc.

Since my crumb tray is warped and I can’t use the full sheet, will support work with me if I cut the sheet down and use it on the side of the bed that isn’t warped? Or do I have to wait until the crumb tray gets here so I can show them that my PG doesn’t cut through all the way? I really don’t want to waste another week or two troubleshooting. Any advice on helping expedite my troubleshooting?

Single pass on the top, multiple pass (I think 2 in this one) on the bottom. 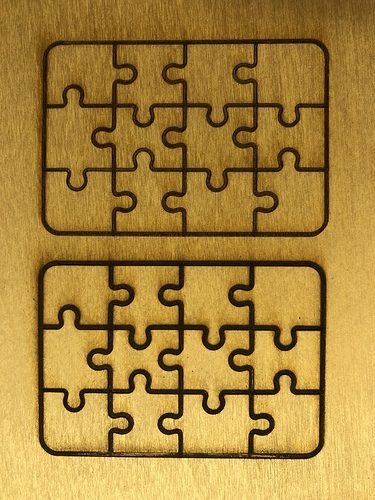 I was using the puzzle piece for my testing on the 3mm Baltic Birch. I had slightly better results on the 4mm wood but the cut still didn’t go more than half the thickness. For the Baltic Birch, it appears to be more like a score than a cut.

I would definitely check the lens inside the head. It looks like you are very out of focus.

The lens is kind of like a bowl. The glass lens should be on the bottom when it is installed.

Is this installed wrong? I tried to follow the directions and thought I put it on correctly. I couldn’t find a good picture that showed it, but I thought I put it back on the same way it was. 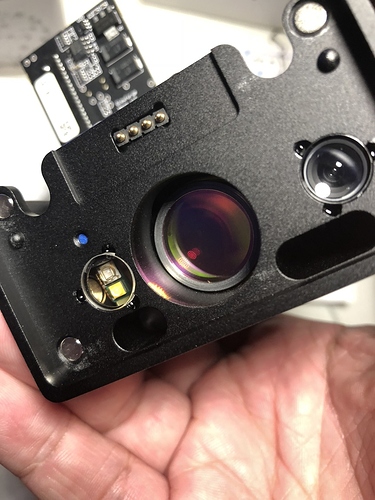 That looks correct. @jbmanning5 is right, though, your cut lines look really wide.

It’s kind of hard to troubleshoot with you testing on non-PG materials, though, because the results are not as predictable as when you test on draftboard with PG settings.

One thing I just noticed is that I don’t think the lens was all the way pushed in. That might explain it. I just took it out and tried to push it back in as far as it could go, whereas before I think I just put it in until I heard it click.

No, the lens is supposed to fit loosely in there, do not push it all the way in. There are magnets in there that move the lens up and down to focus the beam.

It moves up and down in there when it’s in operation; putting it in until it clicks is correct.

Lol… ok thanks! I guess I did it right the first time then. I checked and rechecked the directions and they just say to do it until it clicks.

Check the mirror. Do you have the instructions that show how to do it?

It doesn’t need to be pushed in. Just let the magnets pull it in.

I can’t tell if that’s really right or not. I’ve never looked at that perspective before lol. It appears right though from what I can tell.

The calibration routine when you turn it on, and after a job (the clicking) is calibrating the lens through an autofocus motor.

Personally, I’d run a job with just straight lines. I’d make them different colors and assign different focal heights to them. Probably do .1, .2, up to .5 and just see what they look like.