When I cut my projects, I’m often left with many small off-cut pieces on the honeycomb mesh. They are a little tedious to pick up by hand. So I wandered down to Home Depot to buy a hand-held vacuum.

I found this one that’s just a shop vac top that fits on a standard Home Depot bucket: 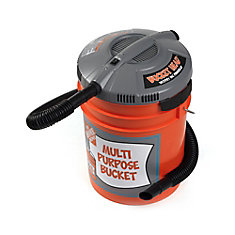 I’m really happy with it. It’s not very powerful for a shop-vac, since it’s pretty small. But it works great for picking up all the small off cuts. For about $30, plus the cost of a bucket, it does a good job.

These are also good for cleaning out a pellet smoker without ruining the expensive Dyson. Or so I’ve heard.

One word of operational encouragement…

Please take the crumb tray out of the GF

when vacuuming things. The static buildup on the hose can be discharged through the GF

and potential damage the electronics.

And as always, never use a vacuum cleaner in your computer.

And as always, never use a vacuum cleaner in your computer.

Well, I never knew that. Thank you.

Just recently had a client call me that their computer won’t turn on. Some light lit up, but nothing displayed on the screen.

Did some basic troubleshooting with them on the phone and couldn’t get their computer up. Finally asked them when was the last time it booted up properly and was to just that morning.

Thought for a moment and then asked if anything got rearranged around their computer. It was then they told me they had moved the trash can out of the way to vacuum out their computer…

I then asked if the hair on their arm stands up when they use the vacuum cleaner hose, which was replied to with “How did you know that?”

They were lucky it was just the BIOS needing to be reset, but decided to take up the suggestion to image their 6 year old spinning hard drive to an SSD. The performance upgrade made them somewhat happy they needed to call me, but didn’t quite make the connection that they nearly lost it all…

I bought a bucket vac and returned it due to very low power. Someone mentioned vacuums generating static, so you can add a bare copper wire to to the hose and run it to an outlet screw

Just recently had a client call me that their computer won’t turn on.

One of my favorite calls was a bakery customer. It was a huge shop that produced product for many local supermarkets.

They were running SCO-XENIX on a top of the line Compaq 386 with half a dozen Wyse terminals hooked up to it. (Yes, I’m dating myself a bit there.

) The computer was located up in the closed and air conditioned offices but the system was frequently overheating.

When I opened up the system I found a good half an inch of flour dust coating everything. It took a couple of hours to clean that one out. If the office had been humid it would have made a nice loaf of bread.

Then there was the salesman that had a customer that complained about losing their Lotus 1-2-3 files every night. He spent several hours with them going over every step they took. They were doing everything right and the files were being saved to disk just fine.

They finally decided to call it a night so the customer shutdown the computer, pulled the floppy out of the drive and stuck it to the side of a mini fridge with a magnet for safe keeping.

I don’t miss my days of doing support.

found a good half an inch of flour dust coating everything

Good thing nothing found the food source. Somewhere I have pictures of spider webs and spider husks inside a computer (being used everyday). Whatever spider that was enticing others to become dinner found a great place to live.

Getting into the users environment is always helpful. Know of one place that a brand new laser was installed and the next day a call went out that it was not working. The service guy came in and found the laser printer water logged and had puddles inside of it.

The user had re-hung their plant over it, watered the plant just before leaving (which later overflowed the bottom plate, spilled onto the printer and all external evidence had evaporated by the next morning.

Several years ago, when 3 1/2" disks were used for software installs, we’d sent a box of 17 disks to a remote site for new loan production software. We told them to hang on to the disks until we called on such and such a date to walk through the installation process with them.

On the scheduled date, we called and asked if they were ready to walk through the install process. “Yes!,” they assured us, “And, to save time on the call, we already went ahead and formatted all of the disks!”

These bucket head vacuums make for phenomenal personal use vacuum tables too. Just build/print some legs to stand the whole thing upside-down, drill some holes in the bottom, and sand it flat.

personal use vacuum tables too

How to Make a Vacuum Former

First, a huge thank you to Airship Noir and their Maker Faire Kansas City 2016 project, “Make Your Own Vacuum Formed Steampunk Goggles.”  They were kind enough to post pictures and inst…