I made this Christmas ornament with proofgrade cherry hardwood but the wood has cupped. The ornament diameter is 3.5”. If I press down on one edge, the opposite edge is cupped up about the same thickness as the wood itself. The blank board appeared perfectly flat when I loaded it into the glowforge.

Anyone else have this issue? Any solutions? 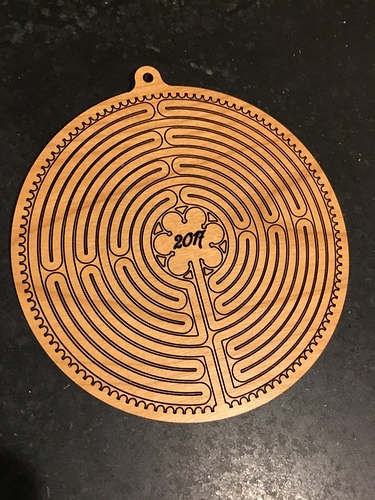 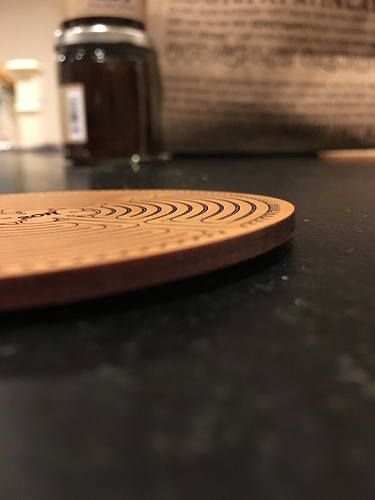 The heat from lazing the board on one side will warp wood… you can flatten it by slightly moistening the piece, placing it between two paper towels, and put something heavy on top of it, like a brick or something similar. Check it for dryness every few hours. It should flatten out significantly.

Did you score it? Or deeply engrave it? If you remove too much material from one side (scoring) the humidity can really boost the post-production warping.

(I know this because the first trivets I made that had a lot of deep scoring on one side, like that one does, are still quite warped, nine months later.)

Mother nature is rough on craftsmen.

If you do a shallow engrave instead of scoring or deeply engraving it’s going to reduce that effect. (And take a whole lot longer to process.)

It was a high quality score using proofgrade settings. I had tried a similarly intricate job on maple and didn’t get the same cupping issues.

Yeah, the effect varies quite a bit according to material. (Using thicker material can also help - thick cherry would leave more material in place to offset the curling effect.)

In theory, if you remove a similar amount of wood from the other side you should be better with flattening. Complication also arises because PG is finished, so in general more moisture will be able to enter/leave on the zapped side. (For an analogy, consider that best woodworking practices recommend veneering the back of a panel with the same material as the front, even if it will never be seen.)