This is the project I’ve been working on… or at least been trying to work on for the past month now. Haven’t had as much free time as I would’ve like to spend on this.

This is only version 1.1… but its just about done. I need to rework the supporting wood for the electronics and some other small tweaks, but other than that, its pretty good.

This is based on Darth Vader’s lightsaber. It’s made from basswood (med hardwood, because that’s what I had), walnut (thick plywood), walnut (thin veneer), acrylic (med clear, though I will make it with red transparent in the final version, I bought already but the sheet is a bit bigger than the GF bed).

Electronics are 2 3mm red LEDs, 1 CR2032 coin battery, 1 momentary push button (which is under the circle veneer, where the lightsaber on/off switch would be located), and instead of wire, I used copper tape. All electronics fit within the 1/8th high plywood layer. Made part of the back panel able to be unscrewed as to replace the battery. 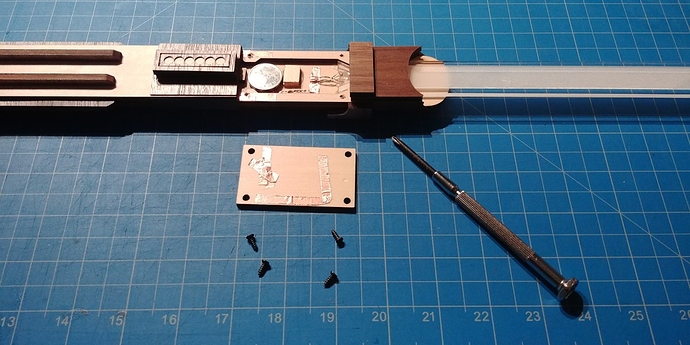 Copper tape on panel lid completes the circuit connecting the battery positive side to the push button and the other end of the push button to the LED, which you can see connects by it coming in contact with the panel tape. 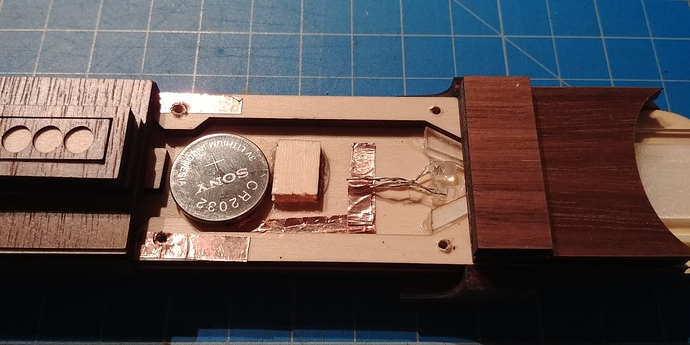 Then the other end of the LED is already touching the copper tape on the bottom which leads to the battery’s negative side. The veneer cut circles on the left is where the push button is located. Its just within the 2nd layer of those plywoods. The top layer has been cut on 3 sides and the forth has a score, allowing it to be pressed like a button on one side. The button’s terminals come in contact with more copper tape, which you can see along the side rails. The panel’s copper tape will contact those upon closure.

When it’s fully complete, I will release the SVG. And then move on to a Kylo Ren version!

What an awesome project!!!

So you are extending the light all the way to the end by engraving the acrylic? Cool idea! It came out fantastic!

Yeah… without that engraving it barely lights up. I would’ve liked to find a way to have more LEDs in the blade, but that would require it having at least 2 layers of acrylic. I wanted to keep this at the 3 layers of plywood that it is currently, which means only 1 layer of acrylic in the middle.

yeah… shawl we talk about copyrights for this?

Not unless you feel the urge…I’ve got meal prep tonight! ROFL!

This is not the light saber you are looking for.

Wow, this rocks! May the Force be with you.

You rock dan… thanks for making an awesome product! I use it pretty much on a daily basis.

Just curious - did you end up sharing the svg for this anywhere? My 5 year old is trying to build a lightsaber and this would be perfect!

I haven’t for several reasons…