Is that the effect you were hoping for (that it would be rasterized) or were you looking to accomplish something else? I know @tony has been thinking about what vector gradients should do.

May I has input?

It would be beyond cool if they could do a variable depth engrave the way the rasters do. It would make beveling possible at edges for nice finishes on boxes.

What @johnwills said that @Jules said🤓

Can I request that the GF Manual has extensive explanations of the different options for engrave/raster, etc (including pros and cons of each).

Going get to need to get the most out of our GF investment.

I inadvertently had made a fill a gradient and when I went to print the design, a message popped up about gradients being simplified to one color.

gradients being simplified to one color

Interesting. I’d expect the same result as raster there, only with more precision. And that might change my design thinking… And that was in Inkscape or Illustrator or…? And whatever the app, have you had a chance to try it in another app to see if the result is the same?

We recommend rasterizing the gradient before printing. Then you will get the (most likely intended) effect.

We recommend rasterizing the gradient before printing.

Okay… I see. So I can start off with a nice, clean vector gradient and then just rasterize it. I have no problem with that.

Worked on a practice cut in chipboard. I think I have the design file set. I got the basic shapes made and then cloned them. Interesting that the way the kerf works it just all collapses down.

This also helped me understand how to place the parts on the grain patterns and do an efficient cut. 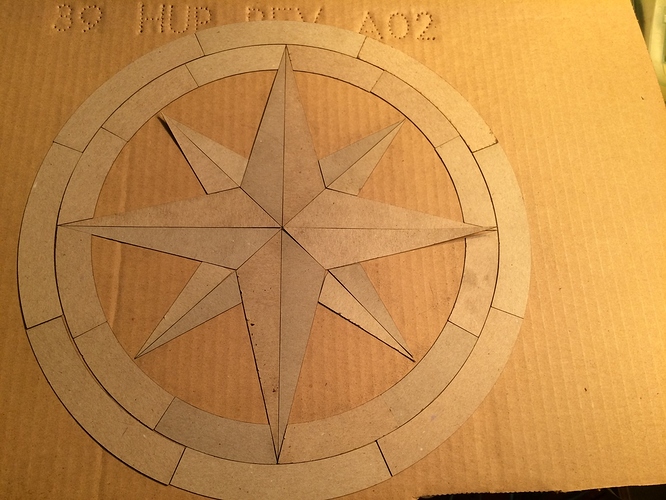 Lookin’ sharp! Can’t wait to see the finished piece…it’s going to be stunning!

Really excited to see how this one comes out!

I ended up resizing everything to be able to fit on a piece of wood I can get into the bed to work with, so this is about nine inches. 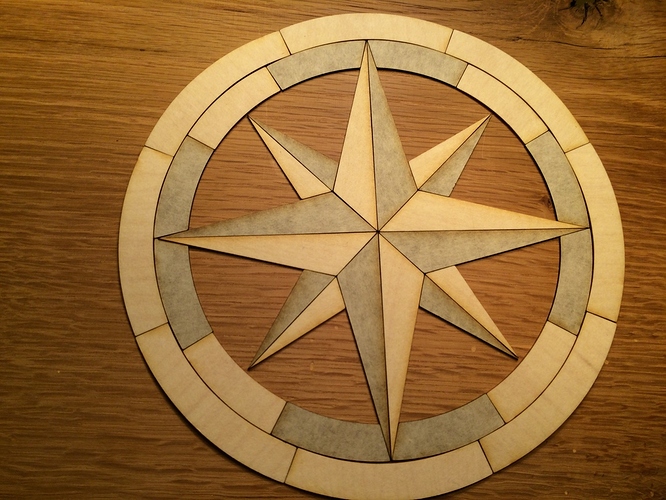 The way the cut profile works makes the kerf thinner at the bottom than the top. Ideally you would cut the veneer on the back, flip it over and then you would have a close tolerance with the edges lining up. Since this veneer is masked on top and adhesive on bottom there is going to be a slight gap between pieces. Not sure what I’ll make of that. See what develops.

I cut the darts out of the maple and walnut veneer. I could use one more type of veneer to add contrast. Need four colors. The base will be one color.

Working on the base engrave. Interesting problem. I could have cut pieces and have the whole thing inlay, but I am trying to use the base as another contrasting wood. So I punched out the design and shrank it enough to compensate for all the kerfs and everything should lay in the pocket. 1 hour and 30 minute engrave. This is in some plywood for a test fit. I scored it first to see how it lined up on the outlines of all the pieces. Now I’m engraving. Not full depth for this time because that would take quite some time. 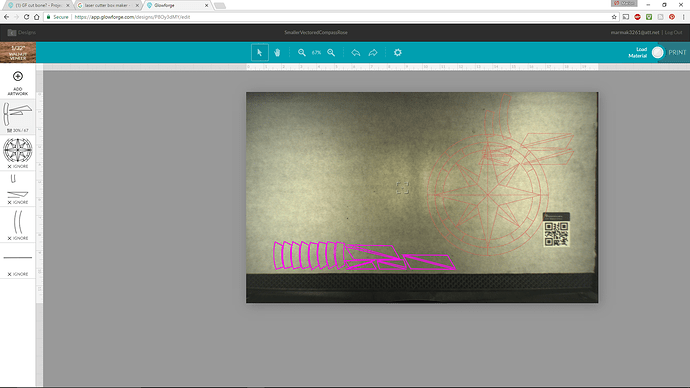 Whoops, orphaned a ring on the left. 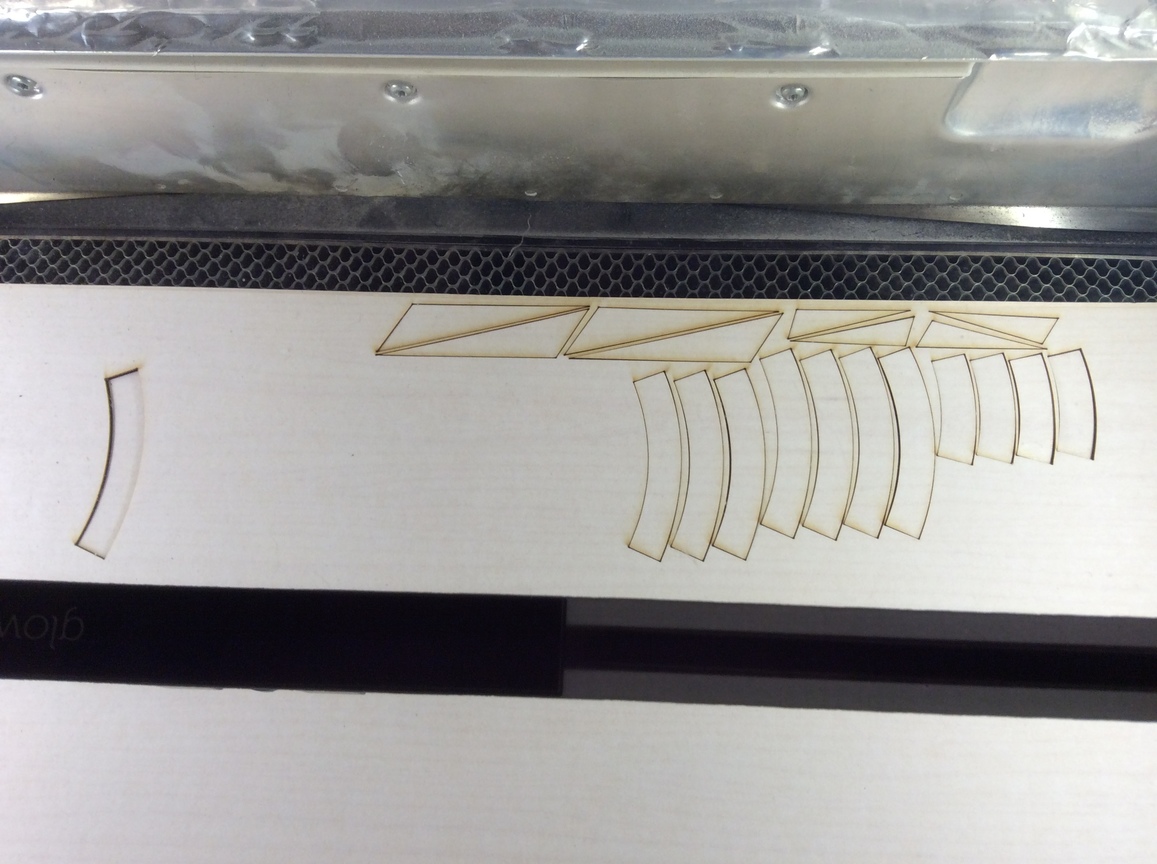 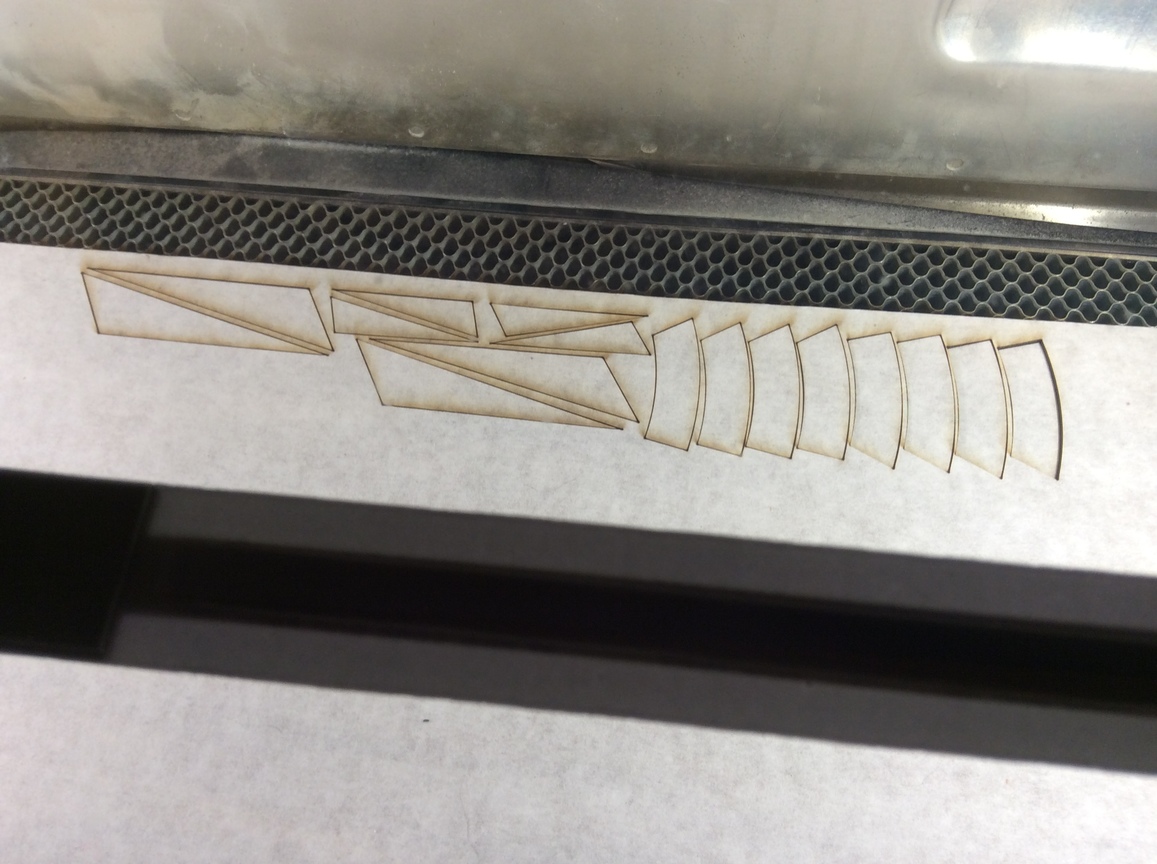 Test engrave for the base. 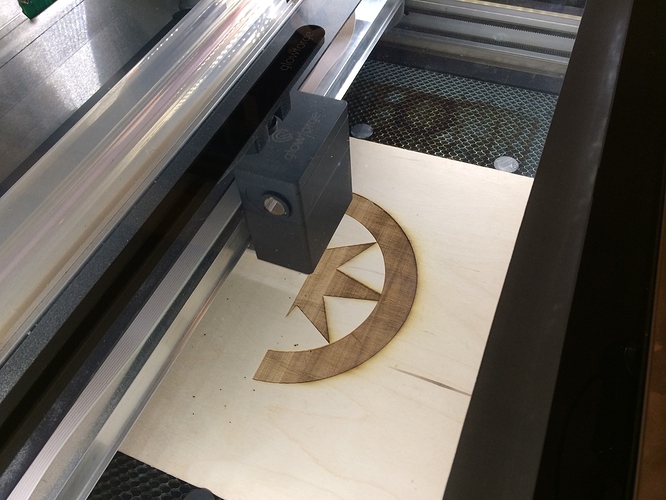 Very nice work my friend. I will need one like that for my nautical theme bar. 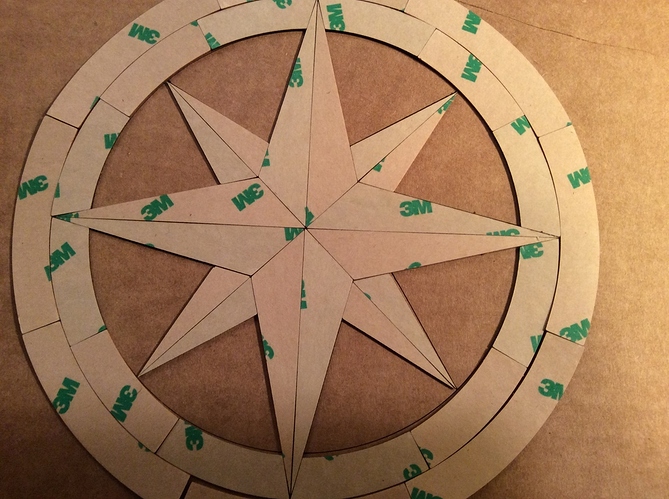 Note how tight the seams are on the underside.

That is just lovely!

The way the cut profile works makes the kerf thinner at the bottom than the top. Ideally you would cut the veneer on the back, flip it over and then you would have a close tolerance with the edges lining up. Since this veneer is masked on top and adhesive on bottom there is going to be a slight gap between pieces.

I’m hoping that you really can just flip it over, so that you engrave with the bottom-side (with the adhesive backing) facing up and the proof-grade masking facing down. I’m assuming you can just “tell” the GF software that the material is proof-grade “xyz” or have it scane in the masking before flipping and cutting.

Is that correct? Can you tell the software that “this is proofgrade walnut veneer” ?

Is that correct? Can you tell the software that “this is proofgrade walnut veneer” ?

No. That’s been pretty well covered before. But your trick with having it scan the QR code first should be good. Until it’s UV painted on in which case maybe GF needs to be able to paint the QR code on the adhesive side as well.