Made a really classy protest sign for Trump’s UK visit. Having 3D letters really makes it stand out = lots of people liking it. Took much longer to paint the letters than cut them, but much better than hand painted. 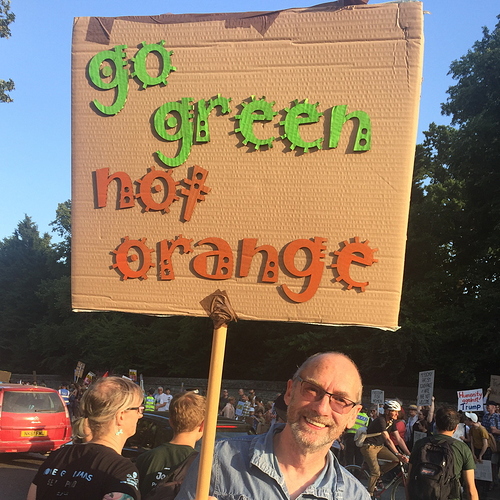 Next time paint the material first, then cut…

Interesting use of time…

That is the trouble with colors, that has a double meaning now in the UK.

@rbtdanforth: Two for the price of one

@smcgathyfay: well actually I had intended to spray them, but then found I had neither of the two colours I wanted !!

Good on you for taking the time to speak out for what you believe in. The ability to peacefully protest is one of the things that separates the free world from those under the rule of authoritarians. Everyone should support everyone’s right to speak out whether you agree with them or not. And great job finding a way to use the glowforge to support your endeavors!

Next time paint the material first, then cut…

Lol. Might be difficult to source thick cardboard in dayglow green and orange…but yeah, that would be quicker

That is the trouble with colors, that has a double meaning now in the UK.

And those meanings are…??

And those meanings are…??

Those who forgot or were not involved in what is today still bubbling below the surface in Northern Ireland the Green vs Orange fight goes back generations, though the Orange extremists were/are not so different in outlook from Trump enthusiasts in the US.

Well, firstly we have the Tango Toddler, and while most Brit’s don’t actually like him, the protests are fundamentally saying that we don’t like racism, sexism, homophobia, climate change denial, anti-humane, small minded, isolationary bigotry of which Trump is the examplar.

Secondly, we have Northern Ireland, where the Orange order (protestants) are also sexist, racist, homophobic etc, but also hate Roman Catholics as well. Very fundamentalist. While the “troubles” have over the last couple of decades died down, they are still there and Brexit may be a trigger for them re-starting.

Now, for me, the green does represent being green: green earth, green peace, stop polluting it, work towards slowing down climate change, before we really screw it up.

Green also represents a united Ireland - certainly one with a lot less inherent hatred in it.

This is the other side (why don’t people make more two sided protest banners?) 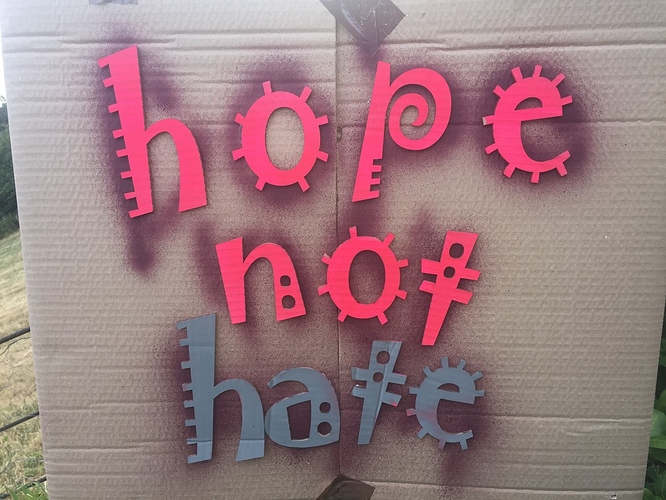 I am drenched in politics all day long. News, talk shows, even the daily cartoons.

Can we please have ONE PLACE it isn’t pushed to us?
Thanks in advance…

Its one of the reasons I cancelled my SiriusXM subscription. I’m not in the US but the politics talk leaks across the border quite a bit.

Good that sqw is standing up for what they believe in though! that and they get to show off how they use their Glowforge!

You can do what I do for threads I’m not interested in following, change that little “Tracking” button to “Normal”

He’s not really pushing his politics, he just made something politics related on his glowforge. I don’t think there should be stipulations about what kinds of glowforge projects get posted here. You wouldn’t see religious iconography and say “religion is pushed in my face all day. keep your crosses off of here”.

Can we please have ONE PLACE it isn’t pushed to us?

What’s that smell?
Oh! That’s the smell of fresh irony as somebody protests… a protest sign.

Reason 1,562 why the internet is so awesome.

Yes. At least this post had a clear subject line that would make it easy to avoid.

I would love a “Never see again” tracking option for that same post, but we can’t have everything.

Especially this time of the year!