Just a note to anyone contemplating the passthrough proof grade materials - shipping has some kinks to work out. If you must order some, you might want to consider ordering many of the same size items so that when they shrink wrap them together, they don’t bend and split the larger pieces along the grain. Not sure why the box was so gigantic on the other axis to allow so much rattle and bounce.

Anyone who lives in a humid state like Florida has likely learned by now how hard it is to deal with the minor warping the PG hardwoods can acquire over a month or two even with a ton of desiccant stored with the PG and air conditioning. I need to tell the unit to run over cuts 2-3 times depending on the level of warp to get through, even then the cut might not make it through the paper in all spots. Without figuring out how to press this passthrough piece flat it probably won’t cut at all. May need to order more powerful magnets than those I have on hand. 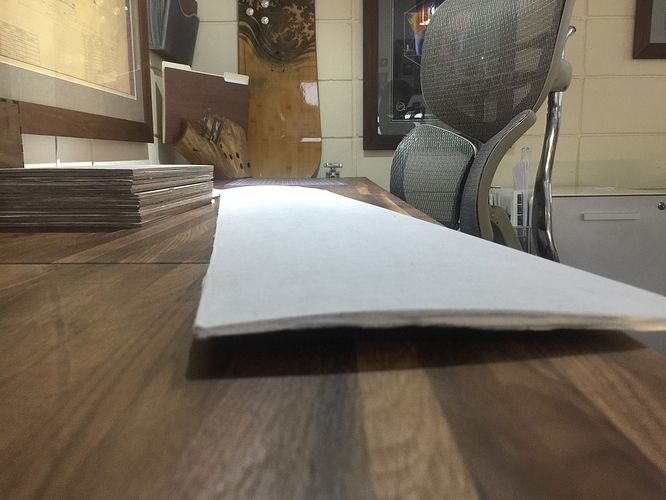 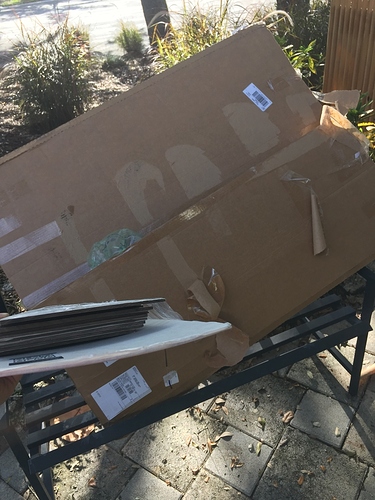 As a rule with all of my organic materials not just GF proofgrade, I can flatten by storing it weighted flat. The time varies by material and environment, days to weeks.

The Honeycomb pins have a lot of holding power. You can place the ‘crown’ of the material down and then pin the edges down.
Of course that doesn’t prevent the warp from rebounding when you remove it. Acclimating the material like @rpegg suggests is best. I have ‘accelerated’ the process by supporting the edges and placing weight in the center to reverse the warp and leaving it overnight - or longer depending on the result.

Is not a quick fix, but I have gotten some thin warped boards to go flat by spraying with alcohol and then pressing flat for a few days under a weighted item (like 5 or 6 other boards and two 10 lb weights).
Not tried this on the sealed PG stuff yet, but works ok for the few raw plys I had that went sideways.

Where I have not been able to store the wood flat (I am still trying to design a bin that would do that) what I have done is clamp the stack between two larger ply sheets and store them that way. compared to gravity it is like putting an anvil on the stack.

Never would have thought about spraying alcohol, that’s cool. Have been storing the board under some flat and heavy furniture that covered it somewhat evenly since making this post. Will see if some months of it make a difference. The board had split along grain on one side because of the warping while shipping, so it won’t ever be good for something really big, but may be able to salvage portions.

The converse philosophy to “Clamp it so it can’t warp” is to separate the individual boards so that both sides are equally exposed to ambient air. That means that both sides absorb and release moisture together and don’t warp. This can be done with small sticks. the idea is that air gets to all sides of the lumber.

Also, warping tendencies may be ‘built in’ on some cuts of wood. ‘Quarter-sawn’ stock is less likely to warp, but is harder to find and more expensive.