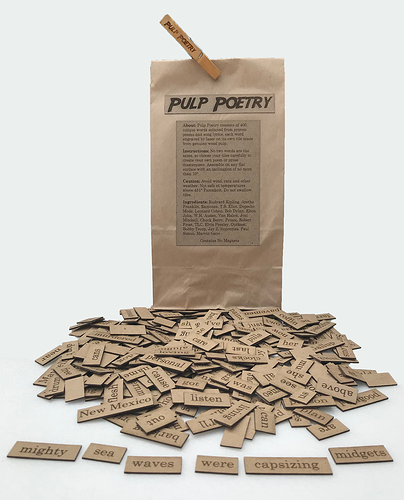 While I was waiting for my Glowforge my neighbor mentioned that her husband had misplaced an acrylic piece with his favorite poem, “If,” by Rudyard Kipling.

I was immediately tempted to replicate the missing poem after the Glowforge arrived.

The poem, which begins “If you can keep your head when all about you/Are losing theirs and blaming it on you,” consists of four stanzas with eight lines apiece. I figured that it would be hard to engrave 32 lines of text, plus space between stanzas, in an attractive and readable font.

But I could print the four stanzas as separate pieces, perhaps creating a frame where they could be shuffled to display one at a time.

I was turning this over in my head in the middle of the night when I remembered Magnetic Poetry, the popular refrigerator decoration which allows passers-by in the kitchen to create and alter poetic bits.

Maybe I could break the poem into smaller pieces…

“If” is a wonderful poem, but its language is repetitive: for instance there are 13 instances of “if” and 20 of “and.”

A half hour later I decided to use part of the last stanza of “If” combined with morsels from some other poets – T.S. Eliot, W.H. Auden, Robert Frost – mashed up with popular lyrics from a melange of artists including Joni Mitchell, Jay Z, the Smiths, Marvin Gaye, Elvis Presley, Depeche Mode, Chuck Berry, Outkast and more. I would aggregate them into a block of text then remove all duplicate words with a script, distilling the result into a list of unique words.

When the Glowforge came I immediately began experimenting with acrylic but soon fell in love with 50-point chipboard as a basis for the word tiles.

That gave me a title for the project: Pulp Poetry.

So much to learn, starting with the Glowforge itself, then Inkscape which I hated at first but have grown to kind of love. I was not able to find a workable Engrave setting for the paper bags — they went from invisible to perforated as I varied power and focus. So I printed packaging info on the chipboard and glued it onto the bags,

The semi-final result consists of 400 unique word tiles in a brown paper bag closed by a laser-labeled clothespin, both embellishments suggested by my wife.

It’s unfinished in the sense that I’m still trying to come up with a rationale for the project, aside from personal learning and showing off how nicely the Glowforge can make game pieces.

Magnetic Poetry has a social component since it lives forever on the fridge, offering a creative canvas for cooks, diners and bystanders. Pulp Poetry demands a flat surface and is likely a transient visitor. Is it a game?

If it’s a game, what’s the purpose? You can’t reconstruct the source text because I sifted out all the duplicate words, so a song llke “Tiny Dancer” by Elton John is reduced to “hold closer tiny dancer headlights highway lay sheets linen busy day today.” (These lyrics are abbreviated because they are midway through the list of verses, so the words “me,” “count,” “the” are already claimed by other verses.)

I’m seeding copies of the project to a couple of people to see if they can develop a purpose.

Catchy name and I’m intrigued by the concept.

Did you do punctuation too?

No punctuation except for apostrophes.

Did you make this magnetic? If so, how did you make the magnetic part the same as the tile? I’ve been thinking of some heart shaped scrabble tiles with magnets on the back but can’t figure out how to cut through both at the same time.

April is National Poetry month. My library system (where I work) is setting up magnetic bread boards black boards and each library will have several sets of the magnetic poetry kits. Maybe you could share your idea at your local library as a test for National Poetry month. You could ask for feed back then develop a product for sale after that.

You can use laser-safe adhesive magnetic sheets. Here’s one source. I first thought I would add magnets, but I liked the simplicity of the chipboard by itself.

Thanks for the suggestion, Nancie, but I don’t plan to turn this into a product. For me it was a starter project to get to know the Glowforge and Inkscape. The idea amused me — it still amuses me — so I’ll probably keep playing with it, but I don’t want to make it a business.

Would I be able to burn through both at once?

I am new to this laser stuff, so I can’t give you an answer based on experience, but the magnetic sheets are sold as laser-safe. In practice I think you just apply the adhesive sheet to the wood, paper or plastic you want to cut, then fire up the laser, setting the focus to the sum of the thicknesses of your primary material and the magnetic sheet.

If you don’t want to experiment, call the company that sells the sheets and ask their recommendations.

I like this idea and execution as well! I dont think it needs magnets at all. Did you try pitching it to local novelty/paper kind of stores? I wonder if paper source might be interested.

Instead of magnets does anyone (@Jules) know if that Krylon 7020 re-positionable tack spray would have enough hold to keep the pieces adhered to a board hung vertically or nearly so? Not as long term a solution as magnets, and I love me a magnet, but cheaper.

Thanks for the nice feedback. I hadn’t thought of asking our local stationery store, but they might be interested — they carry a number of whimsical gift items. But these take about five hours of laser cutting and I don’t enjoy the production process nearly as much as tinkering and experimenting with the GF. I’ll take them a bag and see what they say. And, as nancielaing pointed out, April is National Poetry Month.

Maybe. A fresh built up layer or two of the spray can hold paper very securely. (But there are other permanent spray adhesives that will keep it there forever if it’s something you’re using for display.)

With all due respect to Homer, poetry isn’t permanent. Or maybe it is; I’m certainly not the one to know.

Velcro on a felt board might work better. (I’m not sure the spray would hold up to that kind of use long term. It would be cool if it did.)

Reminds me a bit of the MAD LIBS when I was a kid, where you’d have sentences created with fill-in-the-blank spaces. Imagine having some of those that people fill in from words pulled from the bag. Then, its ‘read’ as the poetry of the evening.

This belongs in a language arts classroom as a station!